Various and sundry Nazis and Nazi-types believe, as some of Hitler’s right-hand men have said, that war brings out the best in people.  Most others, though, would rather conquer lands without a shot fired, and yet another group is not concerned at all with conquest but are anti-war.  “Tangerines,” “Mandariinid” in the original Estonian language, deals with those of us who simply hate war and hate everything that provokes conflict. The folks who started the Abkhazia-Georgia war in 1992 could not be called anti-war, but at least two Estonians caught in the battles brought on by a civil war in which the Abkhazia region of the Republic of Georgia (formerly a Soviet satellite) pushed for secession, are clearly in the anti-war camp, making “Tangerines” an anti-war movie.

“Tangerines,” which is Estonia’s entry in the Oscar competition for Best Foreign Movie which will be decided February 22 of this year, would appear to have a good chance of taking home the statuette, having picked up a Best Director Award from Warsaw’s International Film Festival, Best Estonian Film in Tallinn, Best Director in Tbilisi and other kudos.  It’s virtually a chamber piece, the key action taking place around a table in a remote Georgian shack where Ivo (Lembit Ulfsak) is attempting to make the piece between two individual enemies, both wounded and looking forward to an opportunity to kill each other.  It was about this time in America that Bill Clinton was attempting to make peace between Yassir Arafat representing Palestine and Ehud Barak for Israel, yet another failed try to bring together two enemies, Arabs and Jews who are Semitic cousins, if you will.

The story written and directed by Georgia-born Zaza Urushadze whose “Three Houses” dealt with three stories unified by a painting entitled “Two Owls,” finds Ivo (Lembit Ulfsak), an Estonian maker of wooden crates, and Margus (Elmo Nuganen), a tangerine farmer, remaining in Georgia to harvest a crop rather than heading home to Estonia like most of the countrymen during the civil war in Georgia.  They witness a battle in which Ahmed (Giorgi Nakashidze), a Chechen mercenary in the pay of Russia, and Niko (Misha Meskhi), a Georgian, survive a battle that kills their fellow fighters.  Ahmed in particular wants to kill Niko to avenge his dead friends, vowing to do so but promising his host, Ivo, that while both are under Ivo’s roof, he will refrain from doing so, at least until Niko steps outdoors.

As the two are healing, they get to know each other, but before they sing Kumbaya, they trade insults, some of which stand in for the humor in this serious piece.  While they’re feasting on meat supplied by their host, Ahmed insists that Georgians know nothing about making shashlik and are even worse as fighters.  Niko challenges Ahmed to a fight but once again, the elderly Ivo gets the two to relax for a while all continue to get acquainted..

Most of the film sports clever dialogue, with Ivo’s acting as the wise old man, but there are explosions and, in one situation, Ahmed almost gets killed by a group of his own people who do not believe he is on their side.  The moral seems to be that if you get two enemies to sit together around a table for a week or two, they get to see that they’re both human beings and, hey, what’s the war for anyway?, they will throw down their weapons and embrace.  Too bad nobody told this to arch-enemies in the Middle East, where Muslims are killing Muslims because of small ethnic differences and everybody is against the small Jewish state.  The acting is superb, mostly convincing, and the audience will leave the theater wondering just what in blazes made the Abkhazians so intent on seceding from Georgia that 20,000 get killed on both sides.

Rein Kotov trains his lenses on the Georgia region of Guria, an area that could draw tourist dollars but instead keeps potential travelers away because of continuing tensions.  A most effective antiwar movie but one that oversimplifies, believing that all you have to do is set two enemies at a table, serve shashlik and a hard boiled egg to each, and a peace treaty will soon emerge. 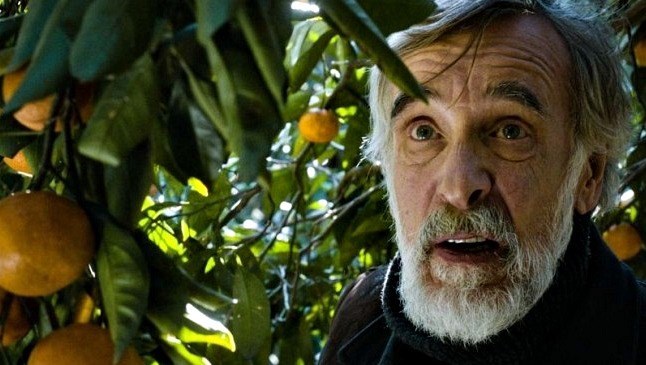