To get a handle on what to expect from the director appropriately named Joe Lynch, here are some precedents for his current “Everly.”  In “Knights of Badassdom,” he finds three people reenacting a live-action Dungeons and Dragons-type medieval escapade only to conjure up a blood-sucking evil Succubus.  In “Chillerama,” things go wrong during a screening of previously lost films in a drive-in cinema house.  With “Wrong Turn 2: Dead End,” some reality game contestants are killed by redneck cannibals.  In other words Lynch is a horror mayvin, though if you look at the genre “horror” in its strictest sense, some form of supernaturalism must be present.  “Everly” avoids the supernatural but as you watch a group of demented sadists go to work on a beautiful hooker who has been imprisoned for four years in a studio apartment, you might just wish that a genie could pop in to save her, or perhaps a Frankenstein monster to go after the killers.  “Everly” is more appropriately called a slasher pic which will appeal to Joe Lynch’s regular cultish fans and to those who like to inflict pain on beautiful women.  Then again it could be called feminist in that its heroine is sufficiently empowered to take care of her tormentors, who use revolvers, pistols, samurai swords, knives, ropes, cages, and the like.

“Everly” opens with a bang, quite a few in rapid succession in fact, as we hear the loud moans of a woman who may have entered Mr. Grey’s Red Room, though Everly (Salma Hayek) surely has no contract with the contract killers and wants nothing more than to be out of the studio apartment.    A grindhouse-style picture with virtually no end to mayhem finds Everly polishing off some young women who are either out to get a $50,000 bonus for offing her or who are told that they would be killed themselves if they did not finish the job.

Most prominent include Akie Kotabe who must put up with a slow death but is a good sport about it, even advising Everly what to wear when her mother visits.  More impressive is Togo Igawa, who freely calls himself a sadist, and whose shtick is to put victims in a cage and watch their slow and painful demise.  He has a series of fluids from water to sulfuric acid to ensure a slow death.  Best of all, Taiko (Hiroyuki Watanabe), a handsome Japanese man with granite feature who is the boss of the organization and who had hired assassins to do away with Everly, who appears no longer to respond to his love.  His plan is to remove the tattoo that covers her entire back, needless to say without anesthesia and to make sure she suffers not only for failure to respond to him but for contacting the police to bring down his organization.

After a short while the rising body count becomes tiresome even if you consider that to be a parody of slasher films.  Think of Uma Thurman’s role as Black Mamba in Quentin Tarantino’s superior “Kill Bill” or for comparison you can choose Ira Roth’s “Hostel” and “Hostel 2” except that Roth worked with a complex plot involving a broad canvas in Slovakia while Lynch must content himself with a claustrophobic story that’s all style and no plot, every action taking place in a room.

As for Mexico-born Salma Hayek, you senior prom date at seventeen should all be so beautiful as Hayek at 48. 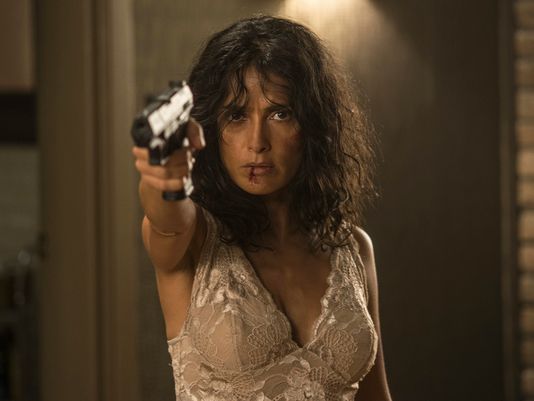