While many people often rely on the emotional support of their families to help them contend with harrowing life experiences, there are perplexing situations where people’s relatives are the cause of their problems. That difficult situation can at times lead the struggling person to take out their anger on the people closest to them, who are harming in horrific ways. That drastic measure of taking revenge out on the people who betrayed, instead of helped, the conflicted and hurt person is enthrallingly portrayed in writer-director Jared Cohn’s new horror comedy, ‘Buddy Hutchins.’ The thriller, which is now available on DVD and VOD, including iTunes, features comedic actor Jamie Kennedy in a drastically different role. The performer rivetingly portrays the title character, who dangerously lashes out against the family members who have emotionally abandoned him during his life-altering time of crisis.

‘Buddy Hutchins’ follows the title character, a former successful guitarist for a rock band, who’s now attempting to maintain and revive his professional life. With the support of his family, Buddy is trying to maintain his struggling dry cleaning business. But his life suddenly turns for the worst again when he’s no longer able to maintain his company, which results in him also losing his home. His wife, Evelyn (Sara Malakul Lane), decides to leave him after he learns she was cheating on him, and she persistently demands he pay her alimony after their divorce. His family dynamic also worsens as his son continues to resent him for his lifestyle choices. The only person who appreciated that he tried to put his life on track and focus on their family was his daughter, who’s proud of the successes he has achieved.

After losing his family, home and business, Buddy begins drinking again, which resorts in him getting arrested. As he struggles to find a way to pay his bonds back to the bounty hunter who paid for his release, Buddy also learns that the man he believed was his father all his life is actually his uncle. His family is further torn apart when his mother dies, and his once supportive brother also loses interest in helping him with his problems. The depressed and devastated title character becomes so dejected over his unfortunate circumstances that he resorts to desperate measures to try to once again garner control over his once promising life.

Kennedy generously took the time to talk about filming ‘Buddy Hutchins’ recently over the phone during an exclusive interview. Among other things, the actor discussed how he was drawn to play the title character, who’s trying to become a better person, but can’t get overcome the challenges in his life, which allowed the performer to show audiences a darker and more complex side of his acting; how he enjoyed working with Cohn, as the actor not only likes filmmakers who write, direct and edit their own material, as it proves they have a complete vision for the movie, but the filmmaker also allowed the performers try their own ideas while they were shooting; and how he tried to play the physical and comedic elements as real as possible, as the funny parts of the film were largely a result of the stunts, while the emotional aspects explored the menacing things people think they want to do, which only Buddy had the courage to carry out.

ShockYa (SY): You play the title character in the new horror thriller, ‘Buddy Hutchins.’ What was it about the character, and the script overall, that convinced you to take on the role?

Jamie Kennedy (JK): I wanted to play Buddy because I was able to show another side of myself-I got to be crazy in the role. I thought that would be interesting, because no one’s ever seen me do that before in a film like this one.

SY: Buddy is a recovering alcoholic who’s determined to improve his life. But despite all his efforts, he’s only met with a failing business and a cheating wife, which pushes him past his emotional limit. How did you balance the psychotic nature with his sympathetic side? Why was it important to show both aspects of the character?

JK: Well, Buddy’s a guy who means well and wants to do good things in his life. He’s trying to become a better person, but he can’t seem to get over those challenges. So he had good intentions, but the method in which he does things aren’t exactly the best.

SY: What was the process of working with the film’s writer and director, Jared Cohn? In general, do you prefer working with helmers who also penned the script?

JK: I do like filmmakers who write, direct and even edit their own material, as they have a total vision for the movie. Jared had that complete idea, and I liked that he had his own vision. But he also let me include my own ideas into the story and character-he’s very collaborative.

SY: Since you’re known as a comedian and comedic actor, did you improv at all while you were filming, or offer Jared ideas on your character’s arc and backstory?

SY: Buddy’s wife, Evelyn, was played by Sara Malakul Lane. How did you build your working relationship with Sara on the set?

JK: Sara’s a very good actress, as she was very focused on her role and the script overall. She was always there for me, and we had a strong relationship on the set. She played her part very well.

SY: With ‘Buddy Hutchins’ being a dark comedy, how did the physical and comedic aspects of the film influence the way you approached playing both sides of the character’s personality?

JK: I just tried to play the physical and comedic elements as real as I could. The funny parts of the film came out of me doing those physical aspects, such as using a chainsaw. That part of the story was ridiculous, but also really funny and dark. The whole movie’s about the things you think you want to do, but wouldn’t actually carry out. But the funny thing was that my character actually did them, which was a fun aspect.

JK: Well, it was a low-budget movie, so we had to show both sides of the character, while also sticking to the schedule. This movie was all about showing a different side of me, as well as the character, within the simple, but equally dark, story.

There was a lot of physical elements in the movie, but the biggest thing about balancing that aspect with his emotions was having enough time to do so. On lower budget movies, you only have a certain amount of time to show everything-we only had about 16 days to shoot the movie. So we just pushed through the schedule every day, and we got most of the stuff we wanted. So I’m pretty happy with it.

SY: ‘Buddy Hutchins’ received a DVD and On Demand release. Are you personally a fan of watching films on VOD, and why do you think the platform is beneficial for independent films?

JK: Yes, I watch movies where ever I can see them-whether it’s in a theater, on DVD or streaming On Demand. But I actually watch more stuff on VOD now than I do at at a theater, so I’m definitely a fan.

SY: Besides ‘Buddy Hutchins,’ you’re also set to play Travis Welker in the upcoming sci-fi horror film, ‘Tremors 5: Bloodline.’ What was it about the character that convinced you to participate in the sequel? Are there any details about your character and the film’s story that you can discuss?

JK: ‘Tremors’ is a legendary film franchise, and it’s been almost 15 years since the last sequel was released. (‘Tremors 3: Back to Perfection’ was distributed in 2001, while the original trilogy’s prequel, ‘Tremors 4: The Legend Begins’ was released in 2004.) So I was really excited and honored to be a part of it. I play a wild character, and he’ll hopefully be someone fans of the franchise will embrace. He’s a new voice in the ‘Tremors’ world, which is why I wanted to be involved, in addition to the film having a great story.

SY: What is it about the ‘Tremors’ series that fans keep wanting to see the story continued, after the original with Kevin Bacon was released 25 years ago in 1990?

JK: I’ve always like the first film, like everyone else who has embraced it as a cult comedy. The original movie is a great example of the western and monster genres, which is why audiences have latched onto it, and continue to love it today.

I hope people will like this new installment in the series, especially since it has has a lot of action. I can’t reveal too many details about ‘Tremors 5’ yet, but there’s a lot of great stuff going on in it. So I’m excited about it.

SY: Besides films, you have also starred in several television shows throughout your career, including ‘The Cleveland Show,’ ‘Ghost Whisperer’ and most recently, ‘Kingdom.’ What is it about television that you enjoy working on so much? How does starring on a TV show compare and contrast to acting on a movie?

JK: I like acting on television because it’s immediate-I like creating things for which I have a lot of say, and are shown right away. It’s harder at times to have a say in movies, as it’s a bigger vehicle. But they’re both great to do, and I like acting on whatever vehicle allows me to utilize my ideas. Sometimes when I’m in a movie, I’ll have a smaller part in it, and then I’ll do a TV show, and I’ll get to control it. I can usually have more creative control on TV than movies, but I like them both-they’re both wonderful mediums.

SY: Besides acting, you have also written several projects, including your comedy film, ‘Malibu’s Most Wanted,’ as well as the television shows ‘Premium Blend’ and ‘Living with Fran.’ How did you become interested in writing films and television series?

JK: I like to write if I have an idea, and no one else really understands it. The main reason I started writing was because I wanted to express my ideas and what I needed to say.

SY: Besides acting and writing, are you interested in directing as well in the future?

JK: I’ll probably give it a try eventually, but it’s a whole other art form. I’d have to have the desire to do it, and I’d have to learn more about it.

SY: Besides ‘Buddy Hutchins’ and ‘Tremors 5,’ do you have any other projects lined up, whether acting or writing, that you can discuss?

JK: Besides those two films, I have another movie that’s probably going to be released during the early summer called ‘The Sand,’ which is also a horror comedy. But right now, I’d people to see ‘Buddy Hutchins,’ which is now available on DVD and iTunes, and hopefully they’ll like it.

Check out an image of Kennedy as the title character from ‘Buddy Hutchins,’ as well as the trailer for the horror comedy, below. 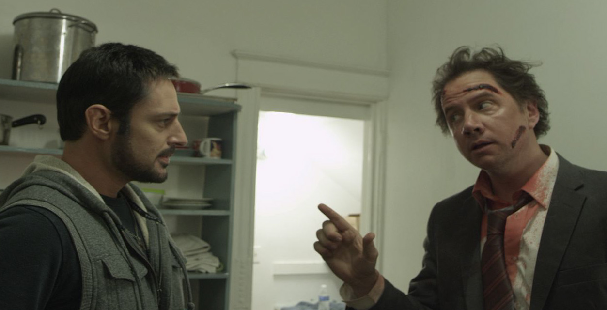