If the producers were to choose an ironic title for this movie, that would be “Trust.”  Every character with a speaking part is a con artist, and because it takes one to know one, each member of that select fraternity is onto every other.  But there are exceptions, the biggest of the many twists being that one of the principal characters has gotten the other one wrong.  Since none of us in the audience are presumably anything but honest, the revelation come up as some dandy reversals.

However important twists are to caper movies like this one, a few surprises here and there do not a riveting movie make, nor can Will Smith still be counted on to wow the audience as he once did.  His partner in crime played buy Margot Robbie, so good as the gold-digging wife in “The Wolf of Wall Street,” is on her way up.

Glenn Ficarra, whose “I Love You Phillip Morris” is about a cop turned con man who meets the love of his life, and John Requa, who scripted “Bad Santa” about a con man playing Santa Claus, are deep into their métier with “Focus.”  As a con artist, Nicky Spurgeon is the head of a gang of con artists who can work the crowded streets of New Orleans and Buenos Aires. They are adept at lifting their marks’ watches, credit cards, identities, cash, and all the other things that make life worth living, becomes romantically involved with Jess Barrett (Margot Robbie), a beautiful blonde who uses her hot physical looks to lure men to her hotel room, then having them confronted by her “husband” who threatens to shoot them unless they turn over their possessions.  Nicky is on to the duo who make the mistake of playing a game that’s as old as chess, but when Nicky and Jess team up because of both their physical attraction and respect for each other’s ability to purloin the goods, we wonder whether their feelings for each other are as genuine as they profess and whether the guy is conning the girl or vice versa.

Since Nicky is a compulsive gambler, he is not averse to betting first one thousand dollars against Liyuan (BD Wong) in the home of the New Orleans Saints, wagering whether a pass will be completed, an extra point kick with cross the bars and the players will run for it or pass, but when the betting reaches $2 million, the movie veers off even more into fantasyland.  When we discover the real identity of a guy with a shaved head (Gerald McRaney) who has been hostile to Nicky from the start, the older man, who has been protecting a multimillionaire scammer, becomes wholly unbelievable

Even so, it’s always fun to watch a pro at work, and Will Smith fills the bill as a guy who makes a good living on other people’s money.  The scenes in New Orleans invite more emotional reaction from the audience, but this is perhaps because by the time we get to Buenos Aires, the picture has lost much of its steam. 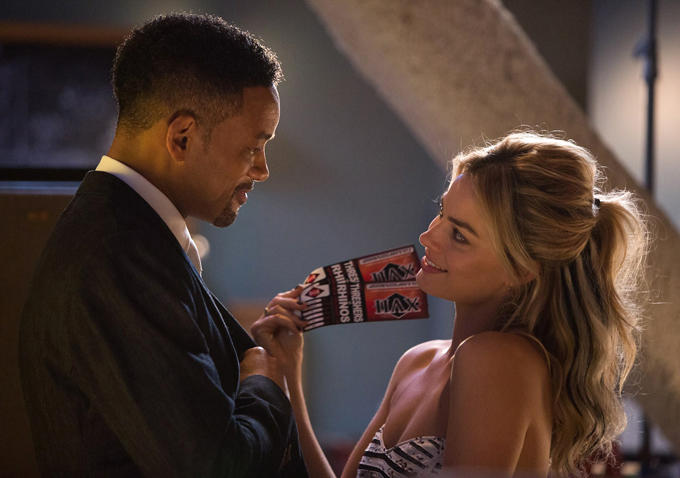