The Taviani Brothers, have decided to tribute one of Italy’s greatest Renaissance humanist, Giovanni Boccaccio. The “Decameron” which has had many screen adaptations – the most memorable was by Pier Paolo Pasolini –  lives again through the subtle direction of the Tuscan sibling filmmakers, who chose Giotto and Masaccio to inspire their cinematography, scenography and costume design.

The book by Boccaccio is structured as a frame story containing 100 tales, told by a group of seven young women and three young men sheltering in a secluded villa just outside Florence, to escape the Black Death which was afflicting the city. Today there is another kind of pestilence afflicting humans worldwide, the one caused by recession and consequent resignation. With the effort of actualising the masterpiece of classical early Italian prose,  Paolo and Vittorio Taviani have selected five tales that make ‘Maraviglioso Boccaccio’ (“Maraviglioso” as in marvellous in vernacular fourteenth century Florentine) a very female oriented movie. Women are those who take the initiative of leaving the city, of telling the tales, and using art to survive.

One of the pillars in the movie is the Black Death, that like never before has been represented thoroughly as the trigger of Decameron’s storytelling. Young men and women are also at the core of the adaptation, but in connection to the role of genders in the society of those times, as opposed to the blatantly sexual adaptations that have been done through the course of film history.

Despite the extraordinary setting, the cast agglomerates the most national-popular actors in Italy and the outcome of the entire mise en scène is rather soap-opera-like. Therefore this trait strongly penalises a movie that would otherwise be a work of art. 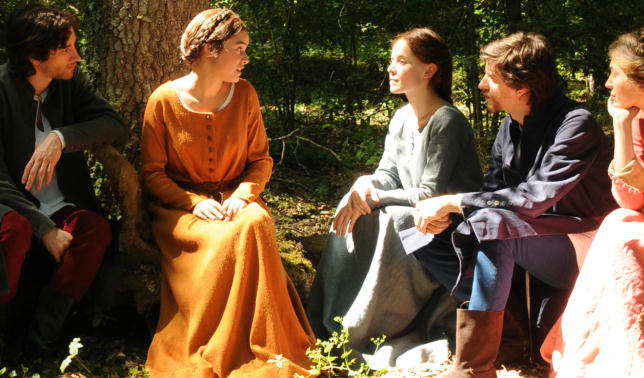