There’s a wonderful amount of campiness that permeates through soap operas made in various countries. None is more iconic than the novelas, better known as the Mexican soap operas. In the past few years they’ve gotten so popular with other audiences, mainly Americans, that they’ve been receiving fantastic ratings in their hometown and over the border. It’s quite the phenomenon, and many have been taking notice of the incredible power these Mexican shows have on international audiences.

At the same time they’re over-the-top to the highest degree for a variety of reasons. From the incredibly tight dresses to the lavish sets, there’s no denying that there’s specific parts to a novela that make them unique, iconic. There’s no denying that writer-director Georgina Garcia Riedel knows all the glorious clichés of novelas and pokes fun at them in a rather unique way with her latest film ‘Ana Maria in Novela Land.’

The quirky comedy-drama centers on the outspoken Ana Maria (Edy Ganem), a young woman who doesn’t have a set direction in her life. The only kind of passion she holds is that for her favorite novela, one which she habitually watches/tweets live reactions to online. She may think that she’s got a good head on her shoulders, but the rest of her family and friends are worried for her. It all changes one day when through some sort of strange magic, she switches places with the novela’s fictional lead character, and naturally all sorts of chaos ensues.

A good chunk of ‘Ana Maria in Novela Land’ wouldn’t have worked if it wasn’t for the acting prowess of Edy Ganem. The young actress hops between two different roles as she goes from playing the outspoken, down-to-Earth Ana Maria and the dainty but fierce fictional character Ariana. The two have very opposing viewpoints to the worlds around them, but she’s able to seamlessly take on the persona of these two women without any hesitation. Her comedic timing and work into the role pays off, really serving as one of the many highlights of this film. At the same time there’s Elizabeth Peña embodies every other stereotypical Mexican mother who wants nothing more than for her daughter to be happy, preferably married with somebody of their choosing who’s also got a lot of money under their belt. The mother could easily have been played off as a one-dimensional, nasty antagonist of this picture, but she comes off as strangely lovable. Well, she’s as lovable as you can get before she starts reminding some of us of our own mothers.

It’s easy to see that the rest of the cast, from Luis Guzmán to Michael Steger, is having a blast, and so is everyone else behind the camera. Georgina’s direction is pretty spot-on, especially with the scenes in the novela world. Every once in awhile it does come off as a little too well-shot, but it’s so minimal that it doesn’t really matter. The audience isn’t being dragged from one scene to another, but rather is walking alongside Ana Maria and Ariana as they try to adjust to their new surroundings. At the same time there’s an obvious independent, almost on-the-cheap-side feel to this film, and a lot of that contributes to the almost harsh lighting in the real world. It is one of the biggest flaws of digital independent films, but it’s more of a minor note than anything else.

Perhaps one of the biggest stars of ‘Ana Maria in Novela Land’ isn’t the stars, but the story. There’s this wonderful balance between the two worlds, even though the fictionalized one is naturally more appealing to see. When the two ladies switch places ala Prince and the Pauper, there’s a delightful amount of drama and comedy that’s really engaging for viewers. There isn’t a dull moment throughout the story, and it’s just made even better with the performances through this charming independent film.

‘Ana Maria in Novela Land’ is a ridiculously cute, funny and sincere indie film. It’s personally one of the best I’ve seen in a good, long while. If this is playing in your town, this is a movie you should check out.

‘Ana Maria in Novela Land’ is out in limited theaters now. 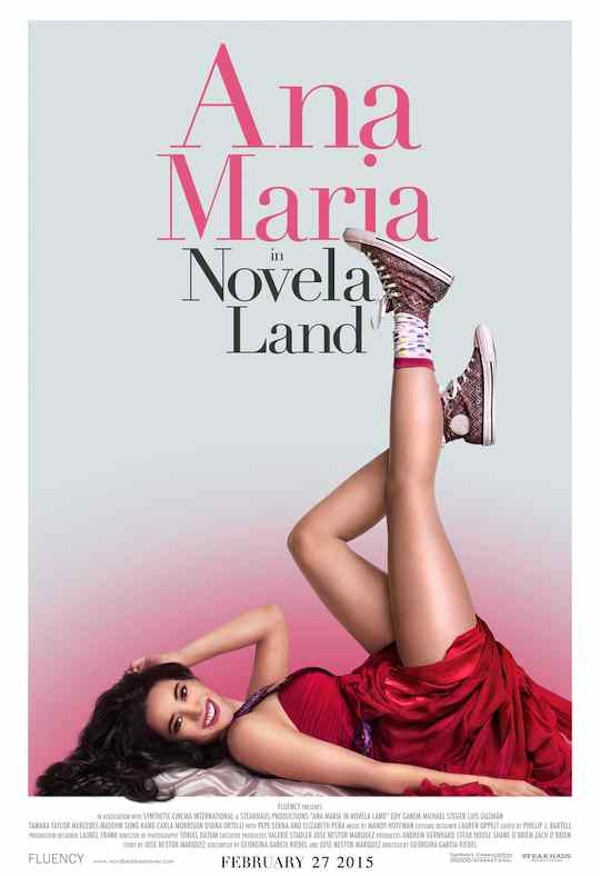