It’s been a good, long while since we’ve seen Will Smith really feel comfortable in his own skin, more so in a particular character. There are many who’ve yearned to see Smith inevitably lean his way back towards his charming, slightly goofy but still lovable self that a large portion of the movie-going and television crowd have latched onto in years past. The tabloids have been continually plaguing all with unnecessary topics about his personal life, and in some way it can be argued that some of his star power has definitely waned due to the negative publicity.

Then ‘Focus’ comes along, a surprisingly entertaining film that basically highlights Will Smith, reminding audiences about the actor he used to and still can be after all these years. It serves as a breath of fresh air to Will Smith’s faltering career, showing movie-goers that a lot of the charm that Smith gave everyone in years past is still there.

The crime comedy features Smith as the character Nicky, a long-time con man whose ongoing game gets thrown into a loop when up-and-comer Jess (Margot Robbie) enters the picture. He inevitably takes her under his wing, teaching her the tricks of the trade. Eventually emotions fall into play when the two become romantically involved, something that they couldn’t deny after a short amount of onscreen time. But good things can’t last forever in that business, especially when your trade involves layers of deceit and manipulation. He tosses his new love Jess out into the cold, and with that comes some repercussions.

Fast forward to three years later, and there she is, wrapped in the arms of his latest employer Garriga (Rodrigo Santoro). In a field where he has to be consistently on top of his game, Nicky’s feelings are once again twisted around as she goes from a romantic interest to a possible competitor.

Perhaps the weirdest aspect of ‘Focus’ isn’t the way the writers described the world of con men, but the romantic entanglements that were involved in this story. Jess could have been a cool, layered female character whose motives may have eventually been all against Nicky’s endeavors, but instead her character is written down into nothing more than a measly love interest. While it is disappointing to see yet another Boys Only Club-centric movie, one where the men play and the women are more used as a distraction than anything else, at least Margot Robbie works wonders with the material she’s got. She takes the character of Jess, somebody who could be played off as a rather ditzy person, and turns her into a really sincere, fun and smart lady. Robbie brings in some additional quirks to the character and makes her ultimately more likable, far less one-dimensional than how she could have been. At the other end of the spectrum for surprising performances is actor Adrian Martinez, stealing scenes with his deadpan delivery and surprising charisma.

Glenn Ficarra and John Requa bring a lot of similar but still witty banter into the dialogue for ‘Focus,’ but some of the more “clever” scenes in the film feel that they lose their welcome after a certain amount of time on screen. There’s one point in the film where a significant con is being placed, and not even the viewer is aware of it just yet, but it takes around 15 to 20 minutes of time for that part to be revealed, which inevitably loses its luster. The excitement, the tension loosens up a little too much, and then when the big reveal is made, it doesn’t really blow anybody’s minds. Thankfully there isn’t too many drawn out scenes that the story leans on, and it ends up moving at a reasonably steady pace.

So far Ficarra and Requa have a fairly good track record creating stories that audiences love (‘Bad Santa,’ ‘I Love You Phillip Morris’), and the same goes for their work behind the camera. This time around the two combine their creative efforts to write and direct ‘Focus.’ They managed to put it all together, but the end visual result isn’t the greatest thing to see. The obvious symbolism of the main characters losing their “focus” from whatever situation they’re a part of isn’t hard to spot, but that style wears out it’s welcome fairly quickly. The lighting scheme and their direction are inconsistent, at times making ‘Focus’ appear as if it’s a gritty action movie, other times that it’s a lighthearted romantic comedy. So every once in awhile it was difficult to keep a continual investment in the film when it’s hopping around between different directional variations. But once the two stop bouncing around with their own unique visions, then viewers are able to really enjoy the actors and the script as they form together and really shine on the big screen.

‘Focus’ isn’t a perfect film, and it probably won’t reach up to be anybody’s top 10 of the year. But it still provides enough entertainment that makes it worth the ticket price, if not for the story, then for the lead actors alone.

‘Focus’ is out in theaters everywhere now. 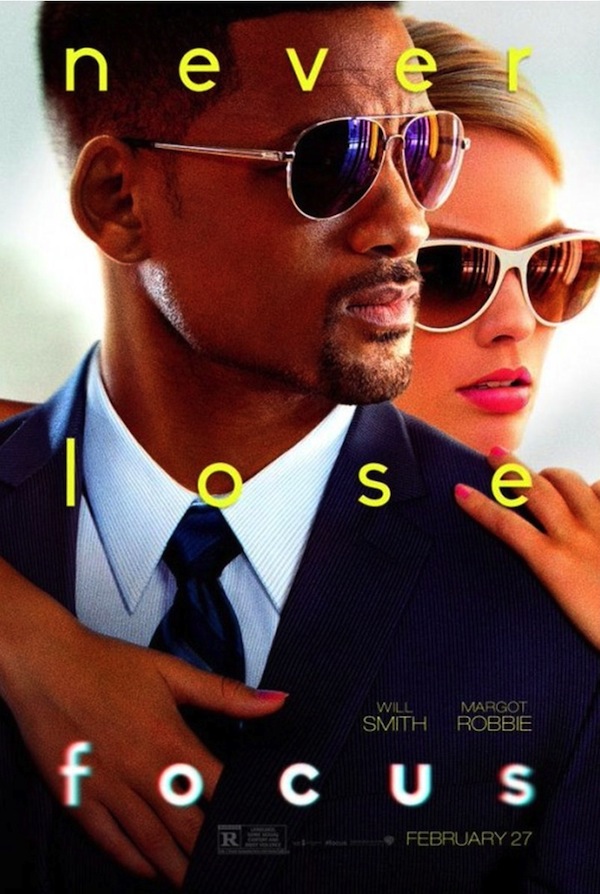