Vimeo seems to be developing a niche for exclusive on demand film deals. The most recent download deal was with Spike Lee’s “Da Sweet Blood of Jesus,” and now Vimeo can say the now have legendary rapper Nas’ documentary “Shake the Dust” available on their service.

“Shake the Dust” is now available as a 30-day exclusive digital download through Vimeo On Demand. The film will soon be available for those who don’t want to sit at home and want the full theatrical experience; “Shake the Dust” will have nationwide limited theatrical screenings starting May 15 at the TCL Chinese Theater in Los Angeles, CA.

The documentary, directed by photographer Adam Sjöberg and executive producer Nas (otherwise known as Nasir Jones), takes a look at how far the hip-hop culture has spread and how it’s been adapted to help people express themselves and their environments. To quote the synopsis, the film “is about breakdancing and hip-hop culture in the most unlikely places.”

“This visually stunning tale weaves a colorful tapestry of dance, music and stories from the drug and poverty battered streets of Cambodia, the untouched wild landscape of Yemen, the underground hip-hop “families” of Colombia, and the embattled and poverty-stricken streets of Uganda.

Shake the Dust illuminates the complicated but transcendent history of hip-hop itself. The story follows crews of b-boys, b-girls and hip hop artists in each of these struggling cultures who have found a voice of empowerment, resistance and community strength in the world of hip-hop.

Hip-hop music, and the acrobatic breakdancing culture that arose in tandem with it, may have started on the streets of The Bronx, but its reach is now decidedly worldwide. Shake the Dust chronicles the influence of breakdancing, exploring how it strikes a globally resonant chord.”

The film features a soundtrack filled with tons of international hip-hop, with music samples from established and new rappers alike, including Nas, Common and Talib Kweli. There will also be some of the best breakdancing you’ve ever seen. The film aims to show how breakdancing can be used as “a positive force for social change.” 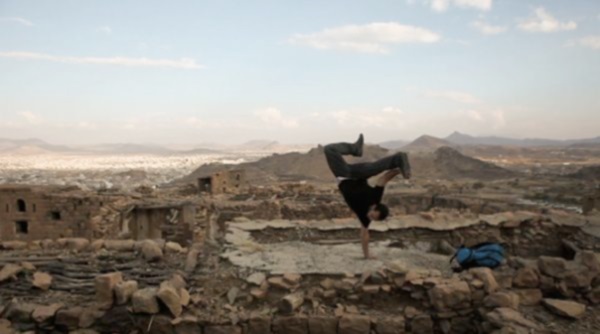