Earnestly reigniting a heartfelt relationship between an estranged parent and child can be an emotionally daunting endeavor, especially when you don’t know how to best overcome the differences that have formed after undergoing a painful experience together. That intimidating process of initially reconnecting, and subsequently overcoming your contrasting opinions on how to best approach life again as you contend with that harrowing occurrence, is relatably explored in director Sean Garrity’s new comedy, ‘After the Ball.’ The family film, which opened this weekend in theaters and on VOD, mixes compelling sentiments and natural humor between its father and daughter, played Chris Noth and Portia Doubleday, to emphasize that no matter what dilemmas they’re forced to overcome together, maintaining familial relationships is one of the most important things in life.

‘After the Ball’ follows Kate (Doubleday) as she graduates with a degree from New York’s Fashion Institute. As she begins looking for a job in couture, no designer wants to hire her, as she’s the daughter of Lee Kassell (Noth), a retail guru whose clothes are inspired by his competition. So she reluctantly returns to Montreal and stays with her godmother, Bella (Mimi Kuzyk), who owns the title vintage clothing store, and her friend Richard (Carlo Rota), an actor with many talents.

Supportive of her talent, Bella and Richard encourage Kate to work with Lee at his company, despite the fact that he has missed a great deal of her life since her mother’s death. While she’s reluctant to join Kassell Clothing, she takes the job, in an effort to reconnect with her estranged father and have the opportunity to begin working as a designer. However, her stepmother, Elise (Lauren Holly), who’s the vice-president of the company, and two stepsisters, Tannis (Natalie Krill) and Simone (Anna Hopkins), are determined to stop Kate from moving up in the company. In an effort to force her to quit, they make her assort the company’s accessory room. While working on that assignment, she meets the quiet and reserved Daniel (Marc-André Grondin), who works in the shoe department of the company, and is the only one at Kassaell Clothing who sees her full potential.

When Elise and her daughters’ plan doesn’t work, they plant evidence on Kate’s phone, showing that she she publicly leaked the latest designs Kassell Clothing was working on. Lee is then forced to fire his daughter, which prompts Bella and Richard to convince Kate to transform herself into a fictional up-and-coming designer, Nate, to infiltrate the company and prove Elise’s destruction. Combing Kate’s inspiring party dress line, Everyday Princess, with her alliance with Daniel and Maurice (David Michael), another company employee who doesn’t approve of Elise, Tannis and Simone, she ambitiously works to save her father’s company under the guise of Nate.

Noth took the time recently to talk about filming ‘After the Ball’ over the phone. Among other things, the actor discussed how he was drawn to play Lee in the comedy in part because it’s a genuine, family-driven film that has positive themes and images for all audiences, especially young children; and how he enjoyed building the father and daughter relationship with Doubleday on screen, as she’s a versatile and talented actress who effortlessly embraced playing the dual roles of Kate and Nate.

ShockYa (SY): You play fashion designer Lee Kassell in the new comedy, ‘After the Ball.’ What was it about the character, as well as the script and the film overall, that convinced you to take on the role?

Chris Noth (CN): Well, I like the idea that I can star in a movie that my son can watch when he’s about 11 or 12, and it’s not about exploding body parts or people using big machines to kill each other. It’s actually a film that kids can go to and be involved in. I also loved the idea that it’s a fairy tale story, wrapped in a modern dress, but maintains the Cinderella storyline.

SY: Portia Doubleday plays Lee’s estranged daughter, Kate, in the film. What was the process of working with Portia to showcase Lee and Kate’s desire to reconnect, but inability to truly discuss their feelings and end their estrangement?

CN: She’s a wonderful actress and person, and it was a delight to work with her. She had a very heavy workload, but she was always emotionally present. She proved that she’s a terrific actress, even though the dual role wasn’t easy to do. Her way of transforming made it fun to work with her. The way she handled the multiple roles was fantastic. My favorite part of the movie was when she was in disguise as a young man in the fashion industry.

SY: While the film focuses on fashion designers gaining and maintaining attention by the industry and the public, the story also emphasizes the importance of family. Having a family of your own, do you feel that it’s beneficial for movies like ‘After the Ball’ to truly focus on that theme?

CN: Well, I don’t think it’s a good idea to say that we have to push family films. But if a filmmaker has a good story for families, than it’s a good idea to make it. If a movie includes an idea that a family can embrace, that makes the story even better. If a general story’s articulate and done well and can be targeted towards families, that’s also great. I think there has to be at least some options for teenagers and kids who are about 10 or 11. That way they can see something that isn’t always violent, since they’re surrounded by that so often. Since so many family-friendly movies today are animated, it’s great they can also have this film as another option. The best family movies are those that truly work and are interesting, which I think this film does.

SY: What was the process of shooting the comedy in Montreal, where Lee and his family live and run Kassell Clothing?

CN: I loved working in Montreal. My wife’s Canadian, and we love Canada. I was able to see the Montreal hockey team (The Montreal Canadiens) beat Boston (the Boston Bruins) during one of my breaks from filming, which was about a year ago. I think Montreal is an exceptional and beautiful city. I brought my son and wife with me, so when I had days off, we were able to really take advantage of the museums and restaurants there.

We had wonderful producers who worked on the film, including Jane (Silverstone-Segal). We couldn’t have worked with nicer and more generous people on the set. You don’t often get that experience in Hollywood. One of the best experiences of making the film was getting to know everyone involved.

SY: What was the process of filming the comedy independently, particularly compared to the bigger studio movies and television series you have starred in? Do you feel filming independently provides a creative freedom in authentically developing your character and the story?

I just did two other independent movies, called ‘White Girl’ and ‘Chronically Metropolitan,’ and they had hardly any money at all. The actors, directors and cinematographers were all just getting together to create these interesting worlds, which was similar to ‘After the Ball.’ I think the way this movie was shot was so beautiful; the cinematography is just exceptional. It’s as good as any Hollywood movie you’re going to see. I choose things that speak to me on some level, and not because it’s a big or small movie.

SY: Besides acting in films throughout your career, you have also appeared on several television shows, including ‘Sex and the City,’ ‘Law & Order’ and currently, ‘The Good Wife.’ What is it about television that you also enjoy working on series?

CN: Again, I just look for good material. Television has changed a lot, especially in the past few years with cable series. They have provided deeper conversations. I also think networks have improved the subjects and concepts on their shows, as well. But they still feature series that people have always watched, including melodramas and procedurals. But when you see cable shows like ‘Mad Men,’ ‘Breaking Bad,’ ‘The Sopranos’ and ‘Sex and the City,’ they’re doing things that movies used to do. So it’s all about finding good material, no matter what the medium is. 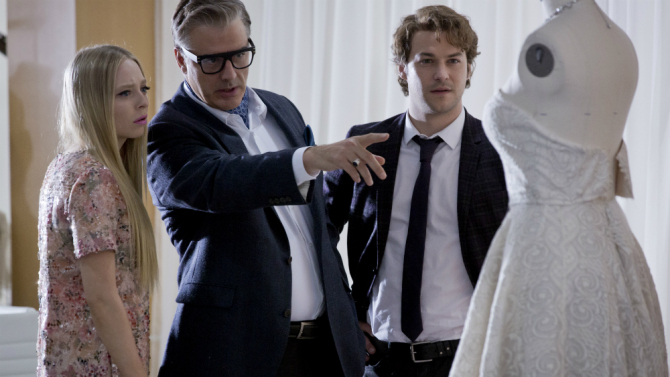 Cancel reply
Interview: Robert Sheehan and Gren Wells Talk The Road Within (Exclusive)
Welcome to Me Movie Review
To Top