After the Civil War, two neighboring families struggle to survive in rural Texas.

The McCluskeys, headed by Randolph (William Forsythe) are dealing with their lost cattle and their son to the war.  His wife Doris (Beth Broderick) is nearly comatose in grief with the loss of one of her sons, while her other two boys – the mentally disabled Dillard (Ryan O’Nan) and the lovelorn Marcus (Rhys Wakefield), try to keep their heads up.

The Rileys headed by Seamus (Ethan Embry), is a family mourning the loss of wife and mother Mary. His children Samuel (Owen Teague) and Abigail (Maika Monroe) assist in their livelihood of trapping and selling pelts. Brother-in-Law Wade (James Badge Dale) returns home from fighting for the Confederacy, wanting to connect with his last living kin.

Wade and young Samuel start to bond, however Seamus sees that Wade is obviously damaged and warns his son to keep his distance. Wade begins to crumble from lack of sleep and night terrors. Wade soon discovers that the McCluskys have been sealing animals from the Riley’s traps, and also discovers that his niece Abigail is  hiding a romantic tryst with Marcus McClusky. Wade snaps and starts a violent war between the families that only has one way to end.

The Good: This will cure your insomnia.

The Bad: Marketed as a western…because it takes place post Civil War. When I think western, I expect cowboys and gunslingers and a horse or two. Well, there’s horses and some guns, but that’s about it. The comatose wife is used as a hole in the mattress and then insulted when the husband says it’s like “f-ing a corpse.” That’s romantic. The Romeo & Juliet couple think copulating in the mud by a puddle-like stream where they can be spied upon by her creepy uncle is romantic, rather than in a tall grassy field surrounded by flowers which is totally an option, but eff it, let’s do it in the gross mud.

If I were to give you an idea of the pace of this film, it’s like the filmmakers watched James Franco’s recent William Faulkner story adaptations but without the colorful characters. Ethan Embry was excellent as he was not even recognizable – completely off type, but that’s the best praise I can give this film. 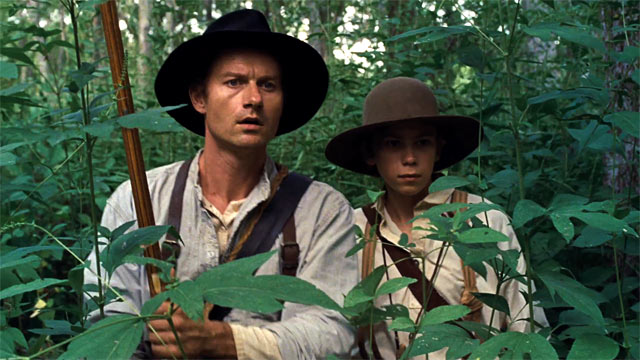