The American action thriller, stars Sean Penn as an ex-soldier who carried out an assassination in the Democratic Republic of Congo and finds his past catching up with him eight years later. The cast also includes Javier Bardem, Italian actress Jasmine Trinca, Idris Elba, Ray Winstone and Mark Rylance.

The film begins with utter promise: the opening minutes show the broadcast news footage on the siege of the Democratic Republic of Congo. But what one would hope to be a socially relevant film turns out to be a B movie, where an impressively muscled Penn goes shirtless for most of the running time, in the attempt to emulate Liam Neeson’s club of fifty-something-year old actors who have switched from eclectic performers, to big daddy hardcore movie torturers.

The entire plot becomes shallower as the character seeks redemption for his past behaviour, which will culminate [SPOILER ALERT] in a ludicrously schmaltzy unrealistic happy ending.

It’s rather disappointing to see how two time Academy Award winning actor Sean Penn – whose on-screen credits date back to 2013 with ‘Gangster Squad’ and the small role in ‘The Secret Life Of Walter Mitty’ – hits and misses his come back. Hopefully his latest engagement as director will be more promising and will allow him to recoup plaudit. Penn shot ‘The Last Face,’ in South Africa starring his current girlfriend Charlize Theron, where she plays the director of an international aid agency in Africa who meets a relief aid doctor (Javier Bardem) amidst a political revolution. The two characters face tough choices surrounding humanitarianism and life through civil unrest, exactly what ‘The Gunman’ mislead in depicting. 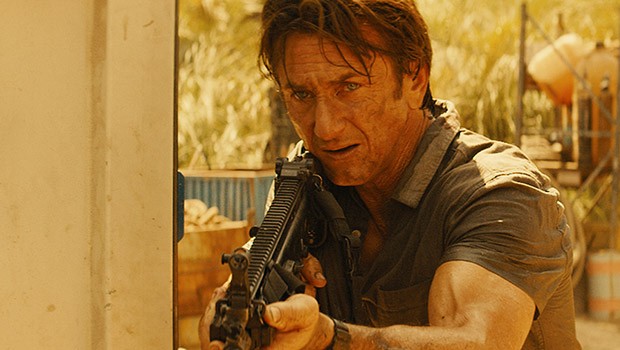