Coming of age films that take place during most people’s actual coming of age, namely late adolescence, brush shoulders with similar films about people in their thirties, who are concerned about their marriages, about how many kids, if any, they may want, or who are unfortunate enough to be contemplating divorce. “Tu dor Nicole,” which means “You’re sleeping, Nicole,” finds a middle ground, focusing principally on Nicole (Julianne Coté), a woman in her twenties.  College is behind her, and despite her degree, this Québec suburbanite seems unable to find work in a better place than a charity clothing store, where her co-workers are mentally challenged.  She is still living in her parents’ home, watching over it during the summer heat, and hanging out daily with her best friend, Véronique (Catherine St.-Laurent).  Somehow, Nicole is able to land a credit card despite her dead-end gig.  Soon, Nicole and Véro are booking a trip to Iceland, an excursion that must seem to them one way to escape the pressure of Nicole’s older brother, Rémi (Marc-André Grondin), who shows up in the house with members of his band, JF (Francis La Haye) and Pat (Simon Larouche).  Though nothing appears to be developing between the single member of the band and Nicole, the lass is being chased by ten-year-old Martin (Godefroy Reding), for whom she baby-sits and who has a baritone voice (supplied by Alexis Lefebvre).

“Tu dors Nicole” seems tailor-made to appeal to lovers of “Frances Ha,” Noah Baumbach’s quirky comedy about a woman who apprentices for a dance company despite not being a dance, and who looks toward a future with diminishing possibilities.  Lafleur’s film runs on deadpan humor, with Côté performing with the same unsmiling, quizzical face as does Kristen Wiig in Shira Piven’s “Welcome to Me,” about a young woman who wins millions in a lottery and is allowed to follow her dream of creating her own TV show.  But Nicole has no such prospects: in fact she could not even hold on to the job in a charity threads store, though she might find piecemeal work sewing the bottom of men’s trousers, which she can do in her sleep.

Speaking of sleep, however, Nicole is an insomniac, her problem not based on a physical defect but in a psychological dilemma: she is not able to reconcile herself with the loss of her youth.  Suburban summer for her no longer has the thrill of the smell of new-mown grass, the excitement of looking at the clouds to see exotic shapes, the feeling that nothing lies beyond your youthful capabilities.  As such, this film, lensed in black-and-white by Sara Mishara to appear timeless (nobody texts, sexts or uses a computer), boasts a fine, hangdog performance by Julianne Côté, who may represent far too many people already at a dead end despite college in their mid-twenties. 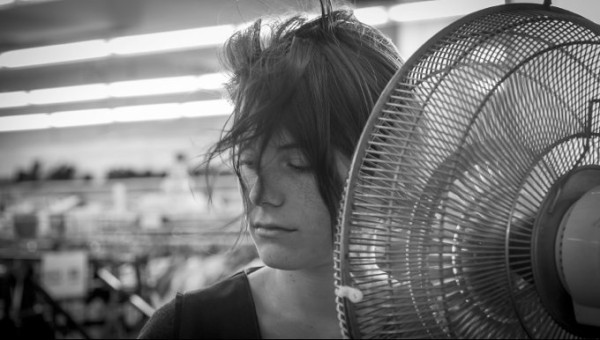 Cancel reply
Celebrate Summer 2015 with a Diverse Range of Drama and Comedy Releases, Including Burying the Ex
A Pigeon Sat on a Branch Reflecting on Existence Movie Review
To Top