Horror television fans are set to receive more blood-curdling and skin-crawling scares, as they can enter to win a limited Blu-ray Collector’s Edition of the critically acclaimed first season of the FX sci-fi series, ‘The Strain,’ in Shockya’s Twitter giveaway. Season One, which was created by executive producers and writers Guillermo Del Toro and Chuck Hogan, who based it on their novel trilogy of the same name, will be available on Blu-ray exclusively on Amazon, starting next Tuesday, June 9. The inaugral season’s home release will then be available for wide distribution on Tuesday, July 14.

‘The Strain’s limited Blu-ray Collector’s Edition includes an exclusive Master’s Bust, as well as disks that contain behind-the-scenes special features that explore the story’s journey from bestselling novel to hit show. The special features for the series, which is also executive produced by showrunner Carlton Cuse, include ‘In the Beginning,’ ‘A Novel Approach, ‘He Is Here,’ ‘Setrakian’s Lair,’ audio commentary on select episodes and deleted scenes. The Blu-ray for the first season of the hit vampire series, which debuted last July on the cable network, will be released in anticipation of the show’s upcoming second season, which will begin on Sunday, July 12.

The following synopsis for Season One of ‘The Strain’ has been released by Twentieth Century Fox Home Entertainment, which will be distributing the series’ Blu-ray:

When a freak virus kills most of the passengers on an airplane, Ephraim Goodweather (Corey Stoll), head of the Center for Disease Control’s “Canary Team,” is immediately called to the scene. The only way to stop the terrifying disease is to face its source – a sinister supernatural creature whose evil intent seems more powerful than any force on Earth – in this chilling series that also stars Mía Maestro, David Bradley and Sean Astin.

Check out images of ‘The Strain’s Season One Blu-ray Collector’s Edition below. 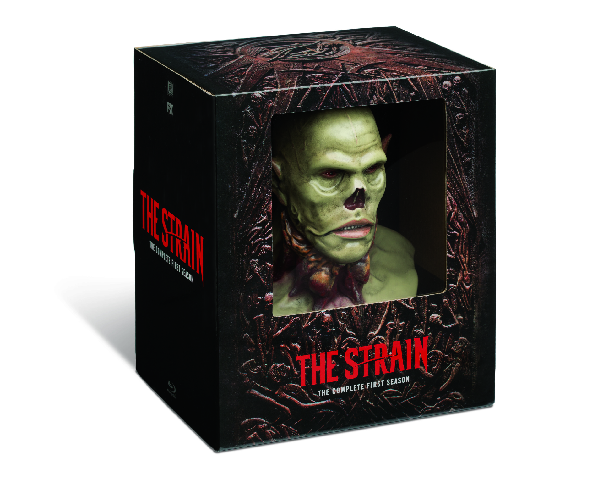