Jean-Claude Van Damme plays Deacon. A former French special ops in retirement whom travels to the Phillipines to give one of his kidneys to his dying 12 year old niece. He stops a guy from beating a girl in front of a club, and as a reward, she offers to buy him a drink – not something you should be doing the day before you give a kidney. Anyway, they get pissed drunk (she roofies him), go back to his hotel and bang it out. He wakes up later in a bathtub full of ice and finds that one of his kidneys is gone.  His brother George (John Ralston) and an old non-specific Asian-descendant friend Kung (Aki Aleong) help him go out and find those who stole the kidney and attempt to get it back before it goes into someone else. They find the hooker Ana (Charlotte Peters) who claims she was only doing this for the money to buy herself out from under a pimp and go home. She tags along to point out all those who are involved in the organ blackmarket. They discover that Deacon was targeted from the start because he was a match for someone lowest on the transplant list. Of course the patient is related to a rich evil dude and Deacon must fight his way through his horde of thugs in order to get to the kidney in time.

The Good: Jean-Claude Van Damme does that splits thing a couple of times so that was awesome.  The filmmakers did a nod to Jason Bourne and took it a step higher vby having JCVD beat a guy with a bible. That was slightly genius.

The Bad: We’re supposed to believe that heavily Belgian-French accented Jean-Claude Van Damme and Canadian John Ralston are brothers? Sure I guess it’s possible, but these “brothers” are supposed to be close; I mean close enough to be willing to give his kidney to his “niece.”  JCVD just had a kidney removed and he’s out there kicking ass with minimal strain? Yeah okay. What’s with the hooker ending up with the brother? Are we supposed to buy that because they all went through something traumatic together, or to make the brother character more likeable?  Maybe they wanted the audience to see her character one last time to show she was okay, but I didn’t find that necessary. He can be a single dad, and there’s nothing wrong with that.

Pound of Flesh is not an award winning action flick, but it’s fun. It is a more serious version of Crank, but with more martial arts fighting. The stolen kidney plot was a little tired. Dude’s over 50, would they even give an older kidney to a little kid? If you’re a fan of Van Damme, you know exactly what you’re getting into. It’s by far not an amazing script, but it’s filled with action and some funny dialogue.  The ending is very predictable, as is the not-so twist ending. 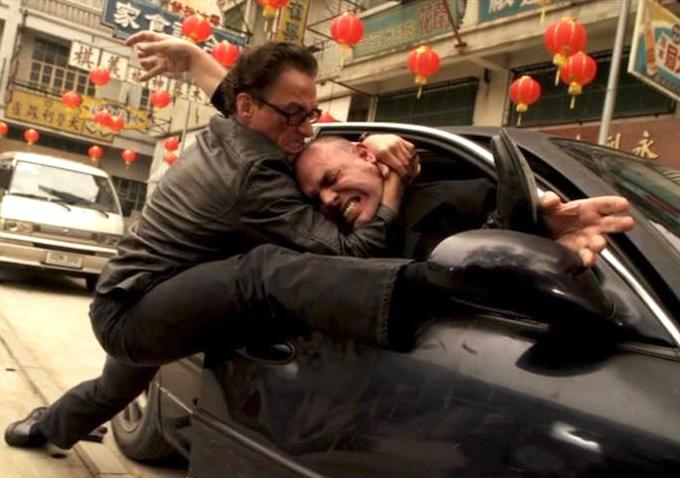