It may sound condescending to suggest that you could consider yourself lucky to be brought up by a father who is bi-polar to such an extent that he had to spend some time in an institution and is likely to be unemployed for quite a while if not a lifetime.  Perhaps this is because dad is so exuberant, so frequently in a manic stage, that he turns out to be an excellent father, though his relationship with his wife is problematic.  In a closely autobiographical look at growing up in a family with a kid sister, a stable and all-too-tolerant mother, and an off-the-charts nutty father, Maya Forbes relates a series of dramatic events that took place when she was a kid of about twelve and must live for a time in semi-squalid conditions and attend a crummy public school that is unable to challenge her natural smarts.  In a warmly enthusiastic performance, Mark Ruffalo inhabits the role of Cameron Stuart, the guy who flew over the cuckoo’s nest, and who should considers himself lucky that his family puts up with erratic behavior that is not really his own fault but a product of his genes.

The title “Infinitely Polar Bear” is not mentioned in the dialogue but arises from the director’s nutty father’s own description of himself bearing bi-polarity. When Cameron (Mark Ruffalo) loses his job thereby putting his family in danger of losing not only the mansion they had inhabited but even the small Boston apartment, he goes ballistic, winding up institutionalized.  In the movie’s zaniest scene, he appears in just a red bathing suit, seeming ready to attack his own bi-racial family consisting of his wife Maggie (Zoe Saldana), his 12-year-old daughter Amelia (Imogene Wolodarsky—the director’s own daughter), and Amelia’s kid sister Faith (Ashley Aufderheide).  Hustling the brood into the car amid Cam’s pounding, Maggie manages to get her husband subdued by police.  When Maggie, who blames Boston’s racialist population for failure to get a good job, gets into Columbia University’s School of Business on scholarship, she warily leaves her two daughters with Cam trusting that he will be able to give them the care and safety they require.

Was she right in trusting her husband?  Yes and no.  On the one hand, the bright and handy man can cook and even sew, the latter skill demonstrated by his putting together a flamenco costume for Faith’s talent show.  He also succeeds in getting the girls to school on time each day and exhibits a friendliness to at least one neighbor that scares her—volunteering to carry in her grocery bags, even suggesting that he could enter her house, put the items away, and chop some onions.  On the other hand, on some nights he irresponsibly leaves the girls alone in the apartment and heads for the bar where his alcoholism takes hold, but then again he’s not as likely to be killed by the booze as he is by his chain smoking.

This is one of Mark Ruffalo’s most engaging performances, as he can rivet the audience even though the film does little more than show the family’s day-by-day activities.  As the pre-teen girls, both Imogene Wolodarsky and Ashley Aufderheide match up to the characterizations of the older pros, yet avoid the terminally cutesy behavior common to movies that cater almost exclusively to the small fry in the audience.  Zoe Saldana’s key scene occurs when her character is seduced despite her advice that they stay away from sensual activities. The subtle way in which Ruffalo eases his way into a physical relationship is as authentic as you’re likely to see on the screen.

The film is graced by Bobby Bukowski’s handheld camera angles which show off the apartment as a real estate agent might, taking advantage of the residence’s “cozy” interiors.  “Infinitely Polar Bear” was filmed in Providence, Rhode Island. 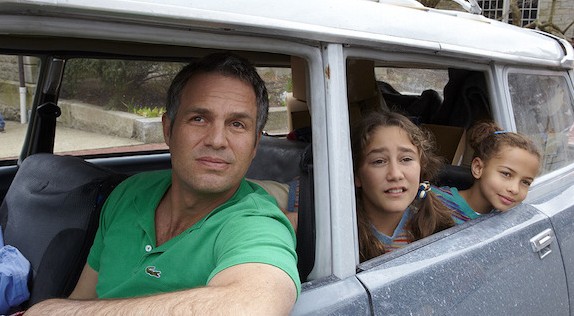