Determining who you can really trust to support you on your quest to happiness can be one of the most difficult journeys a person can take during their life. Michael Fassbender and Kodi Smit-McPhee are ambitiously embarking on that challenging process in Shockya’s new exclusive special features making of clip for their western drama, ‘Slow West.’ The clip supports the action thriller’s distribution this Tuesday, July 7 on Blu-ray (plus Digital HD) and DVD (plus Digital) by Lionsgate Home Entertainment.

The drama was released theatrically by A24 in May, after it earned the World Cinema Grand Jury Prize: Dramatic award at this year’s Sundance Film Festival. The western’s upcoming Blu-ray and DVD, which will be available for the suggested retail price of $24.99 and $19.98, respectively, will include the “On Strange Land: Making ‘Slow West'” featurette and deleted scenes.

The following synopsis for ‘Slow West’ has been released by Lionsgate Home Entertainment:

In search of his fugitive girlfriend and her father, 16-year-old Jay (Smit-McPhee) heads west across the 19th-century American wilderness. Along the way, Jay meets Silas Selleck (Fassbender), a mysterious traveler who protects him from the savage and lawless elements. But is Silas really watching out for Jay…or is he tied to the band of desperados tracking them? Every step west brings Jay closer to the truth—leading to an epic, bullet-laced showdown in this quintessential Western.

Shockya’s exclusive ‘Slow West’ special features making of clip begins with Fassbender stating that his character isn’t truly embracing his emotions. As the Academy Award-nominated actor then questions if there’s much love, or experience of any kind of emotions, in Silas’ life, clips of the character riding with Jay on their horses from the drama are shown. As the two are chronicled bonding on their journey, Fassbender states their adventure together is finally opening Silas up to those feelings of affection again.

The video then features Maclean explaining how Fassbender and the rest of the cast not only needed to know the film’s story and their roles, but also why their characters were motivated to do the things they do, during filming. As clips of the helmer interacting with the actor on the set are shown, Maclean stated that working with Fassbender and the cast was great, as they helped him improve his work as a filmmaker.

Smit-McPhee is then shown on the drama’s set, as he states that they filmed the movie almost entirely in chronological order. He noted that he feels the process was beneficial, as it helped him and Fassbender, as well as the rest of the cast and crew, get to know each other better as they filmed each scene. Maclean then praised the young actor, as clips of the two interacting on the western’s set are shown. The director noted that Smit-McPhee captured Jay’s naive nature, but was also clever and intuitive at the same time. 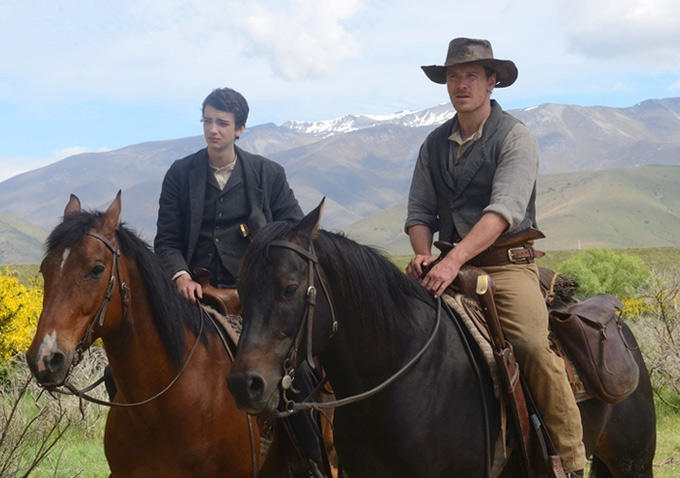