Rose and her younger sister Hannah are two teenagers living in 1970’s suburbia. Rose is the more contemplative of the two, introverted and serious. Hannah is the troublemaker, playful and fun loving. The girls have long been fascinated by the abandoned house at the end of Primrose Lane. That house. The house with the terrible story behind it. The house in every town in America. The house that every kid dares their friends to go into, but none ever do.

Rose and Hannah decide to steal their parents’ 8mm camera and venture into the house on Primrose Lane. At school, they attempt to recruit their best friend Caleb to join them. Caleb wants nothing to do with it, and he tries to dissuade the girls from going in. After being admonished by a teacher, Mr. Luther, for being late to class, the kids go their separate ways. After school, Hannah is looking for Rose and finds her in a private, perhaps inappropriate conversation with Mr. Luther.

That afternoon, the girls finally enter the house. Exploring its decrepit hallways and rooms with a combination of exhilaration and fear. Detritus covering the floors, ominous words painted on the walls. Within the dark, dank walls of the basement, the girls discover for themselves the secret that this house has been hiding for years.

Days after the disappearance of Rose and Hannah, a distraught Caleb is being observed from a distance by that same 8mm camera. The lens turns on the new owner of the camera, Mr. Luther. Later back at the Primrose House, Caleb desperately returns to look for any sign of his friends. The camera watches from a grimy window. As Caleb begins to feel the presence of this voyeur, he turns his head. His eyes find the lens, and our story ends.

Primrose Lane is the first Revolver Short Cut – a series of short films from Phillips and Wagner’s Revolver Picture Company. Written and Directed by Nick Phillips.

For For more, visit Revolver Picture Company at facebook.com/RevolverPictureCompany 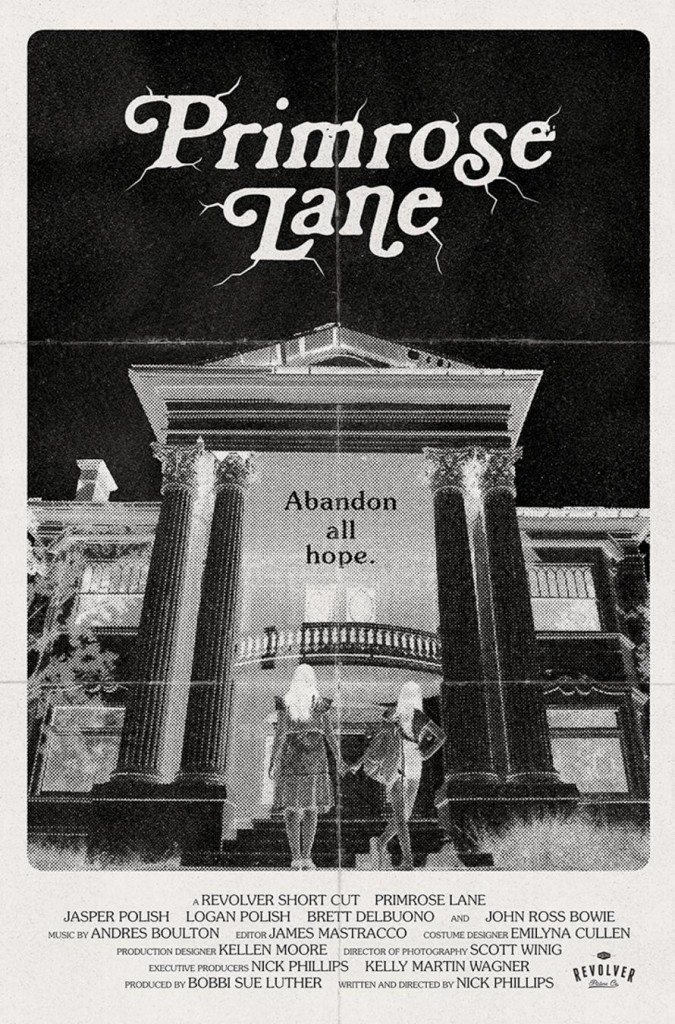