People often demand to know the entire truth behind every situation that affects their lives and futures, but there can be such evil in life that it’s often best to keep the potential catastrophe hidden from the general public. That determination to protect and save innocent human life as much as possible from an unrelenting tragedy is captivatingly explored in the new independent horror thriller, ‘The Vatican Tapes.’ The film, which opens today in theaters, and was directed by Mark Neveldine, features actor Djimon Hounsou as a dedicated vicar who’s working in the Vatican. The religious man devotedly protects the world’s population from severe devastation by guarding, and monitoring, the title tapes that prove such horrific atrocities really can, and do, happen.

‘The Vatican Tapes’ follows Angela Holmes (Olivia Taylor Dudley), an ordinary 27-year-old who recently moved in with her boyfriend, Pete (John Patrick Amedori), much to the dismay of her father, Roger (Dougray Scott), who’s a Lieutenant Colonel in the U.S. Army. While on leave from his job, Roger visits his daughter at her home in Los Angeles, in an effort to surprise her for her birthday. While their reunion is only initially tense because of his disapproval of her living with Pete before they’re married, Roger’s concern for Angela soon shifts, as her personality begins to become uncharacteristically aggressive. After she unexpectedly causes a car accident, Angela falls into a coma for 40 days, leading Roger and Pete to bond as they refuse to give up hope on her recovery.

A local priest, Father Lozano (Michael Peña), who served in the military before he began working for the church, bonds with Roger at the hospital over their shared experiences serving their country. The priest advises Roger to take Angela off of life support after she shows no chance of recovering from her coma, and he performs last rites for her. She then miraculously awakens, much to the disbelief of her doctors, the priest, her father and her boyfriend. While Roger and Pete are initially ecstatic over the chance to bring her home, Angela surprisingly begins to exhibit volatile behavior.

When she’s then suspected of causing serious injury and death to people in the hospital, she’s transferred to a psychiatric hospital, where she’s examined by psychologist Dr. Richards (Kathleen Robertson). When Angela informs the doctor that she knows intimate and incriminating details about her personal life, and is once again believed to cause mass injuries and deaths amongst the other patients, she’s discharged from the hospital.

With her doctors unable to provide anymore treatment for her, the tapes from one of her sessions with Dr. Richards is sent to Vicar Imani (Hounsou) and Cardinal Bruun (Peter Andersson) at the Vatican. After watching the tape, the two believe Angela’s possessed by the anti-Christ. The cardinal decides to travel to Los Angeles to work with Father Lozano to exorcise the possession ancient satanic force, which ultimately proves to be more powerful than they ever imagined. With the help of Roger and Pete, the two religious leaders fight to not only save Angela’s soul, but also the safety of the entire world.

Hounsou generously took the time recently to talk about filming ‘The Vatican Tapes’ during an exclusive phone interview. Among other things, the actor discussed how he was drawn to play Vicar Imani in the horror thriller, because he wanted to reunite with Neveldine, who he has previously worked with, as well as the fact that he prefers to play characters who have great integrity; how the cast and crew had to be creative with their location and budget issues, since the thriller was shot independently, but he feels the overall movie was shot beautifully; and how he would be interested in reprising his role as Vicar Imani in a sequel, if the opportunity arises, as he embraces the fact that the character is trying to protect humanity from evil.

ShockYa (SY): You play Vicar Imani in the new horror thriller, ‘The Vatican Tapes.’ What was it about the character, as well as the story overall, that convinced you to take on the role?

Djimon Hounsou (DH): It was mainly about Mark, because I worked with him a long time ago. We’re always looking for something to do together again. But the attraction I also had with this story is that I feel that most of us are completely oblivious to the aspect of life that deals with religion and things we can’t see.

SY: Speaking of working with Mark on ‘The Vatican Tapes,’ since the film is driven by its characters’ relatable emotions and moral dilemmas, what was the collaboration process with him like to showcase that element of the story?

DH: This film was such a creative process for Mark. We were trying to create an interesting story that allowed my character to become somewhat of a legacy. But even we were trying to create that legacy for my character, I actually haven’t seen the movie. I don’t really want to, because I don’t like to watch scary movies. I used to watch them, but the more mature I get, the less I like to see them.

SY: While creating the vicar’s backstory, did you do any particular research to help you prepare and connect with his emotions and motivations?

DH: Of course, since the story deals so much with the Vatican. Since the film documents so many bad things, the Vatican didn’t help us that much. But we were trying to tell what we think is a powerful story. We don’t have proof that this story could happen, but these things do exist at the Vatican, and nobody knows about them. So this is our version of what we think can be the Vatican tapes.

SY: The horror thriller reveals that Vicar Imani oversees the Vatican’s secret video collection of all of the sanctioned exorcisms and possible demonic possessions around the world. While not much information is given about the vicar’s background, did you create a backstory and explanation about why he protects the tapes?

DH: In a way, he was trying to help humanity continue, but we didn’t truly develop why he was keeping these tapes a secret. The tapes do show important events, which my character was trying to protect from the world. He didn’t want to reveal to the world that Satan is really among us.

SY: After he views Angela’s tape, Vicar Imani alerts Cardinal Bruun, who’s played by Peter Andersson. Since most of your scenes in the thriller are with Peter, what was your working relationship with him, as well as the rest of the cast, like on the film?

DH: It was a great collaboration. We worked with a lot of great professionals, so there wasn’t any drama to be expected.

SY: The horror thriller was set, and primarily filmed, in Los Angeles. Since Vicar Imani works at the Vatican, and all of his scenes take place there, what was the process of recreating the religious city state for the movie?

DH: You can recreate the Vatican anywhere. We all obviously know what it looks like from the outside, but not everyone knows what it looks like on the inside. Like with any film, the shooting location often changes so dramatically from the setting in the story. We did whatever we can to make it happen here in Hollywood. Our location was largely staged by Mark and our cinematographer (Gerardo Mateo Madrazo). So I just had to go into one place here, which served as the Vatican.

SY: What was the overall process of shooting ‘The Vatican Tapes’ independently?

DH: Well, we had a short shooting schedule because we didn’t have a lot of money. There was also a lack of shooting on location. Even though you don’t have a big budget on independent films, you can still make an amazing story. We did have to be creative with our location and budget issues, but the film turned out well. We did make the film entirely in California.

SY: Since you have appeared in both independent and bigger studio films, do you have a preference of one over the other?

DH: Well, bigger studio films are just jobs that require more time and more money. The preference is to have more time and money, so that you can have the luxury of working until you get the shots you want. But if you don’t have the time or money, you can still tell a beautiful story.

SY: While Vicar Imani is one of the morally respectable characters in ‘The Vatican Tapes,’ you have also played villains in several action films. Do you have a preference of portraying protagonists or villains, particularly in action movies?

DH: I prefer to play characters who have great integrity, but it is also nice to play a bad boy here and there. But it’s best to play someone with an elevated character.

Action films are thematically different from regular dramas. But as actors, we like everything, and have to be able to play every tune. Action movies can be nice and light-hearted, while dramas have more emotional investments.

SY: The horror thriller’s ending is set up in a way that Angela can be the lead character in another film, and Vicar Imani can also return. Would you be interested in reprising your role in a sequel?

DH: Of course, and I hope this film does well. It was great that we were able to give ourselves that leverage to make another movie.

SY: Besides ‘The Vatican Tapes,’ do you have any upcoming projects lined up that you can discuss?

DH: I just finished ‘Knights of the Roundtable,’ which will be released next year. I also have ‘Tarzan,’ as well as ‘Same Kind of Different as Me’ from Paramount Pictures, coming out next year. 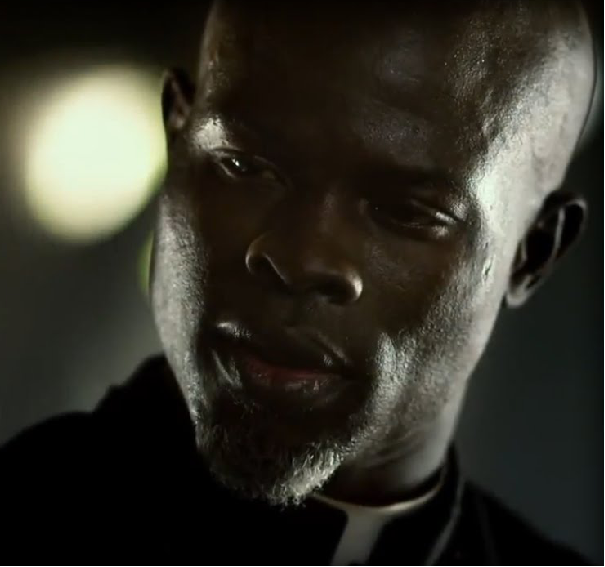