People can often become so comfortable with the familiarity of their daily routines that they lose all passion and determination in maturing and further pushing their boundaries. Sometimes the best way people can emotionally evolve is to allow others to help them take a meaningful exploration into who they are, and why they’re at their current stage in their lives. That significant examination is enthrallingly showcased in the new documentary, ‘Bending Steel,’ which was crafted by first-time feature film writer, director and producer, Dave Carroll.

In honor of the movie’s release tomorrow on iTunes, Google Play, Amazon Instant Video and its official website, Shockya has an exclusive clip from the documentary, titled ‘Crowd.’ The video focuses on New York City native Chris Schoeck explaining that in order to fulfill his dream of becoming a successful strongman, he has to be vulnerable as he connects with his audience. The clip opens with the successful personal trainer motivating one of his clients by saying he has to be hard on himself in order to succeed. The aspiring strongman is then shown walking amongst large groups of people on the streets of Manhattan, as he notes that he has to showcase his frailty in order to invite his viewers into his arena. The video ends with Schoeck immersing himself in the task of bending a horseshoe near his basement storage unit.

The following synopsis for ‘Bending Steel,’ which had its world premiere at the 2013 Tribeca Film Festival in New York, has been released:

‘Bending Steel’ is a deeply moving and inspiring documentary from filmmakers Dave Carroll and (co-writer, cinematographer and producer) Ryan Scafuro, exploring the life of 43 year-old Chris Schoeck, a Queens, New York native training to become a professional Oldetime Strongman. The story follows Chris’ journey from his early days training in his small basement storage unit to his very first performance on the big stage at New York’s historic Coney Island. Alongside his trainer Chris Rider, he meets living legends and heroes within the strongman community. As these characters come alive, a long forgotten time is revisited. The men perform feats that defy limitations of human strength and pain: twisting horseshoes and nails with their bare hands, breaking chains with their hair, and bending coins with their teeth. Chris is learning from the greats. His training is progressing at a remarkable pace…he is determined to become a professional strongman.

But as the filmmakers follow Chris through his successes and failures, more is uncovered about this endearing yet introverted character. It soon becomes clear that not only is Chris searching for recognition and acceptance within this community, something he hopes will fill a growing void in his life; he is also facing crippling fears and insecurities, many of which are revealed for the first time as the cameras roll. A remarkable innocence is uncovered. The film bears witness to a tenacious man struggling to come out of his shell – to shed both physical and social limitations that have held him back his entire life – limitations that now threaten his dream of success. What results is an intimate and touching story of one mans epic struggle for fulfillment and happiness, two things which have always seemed just out of reach. 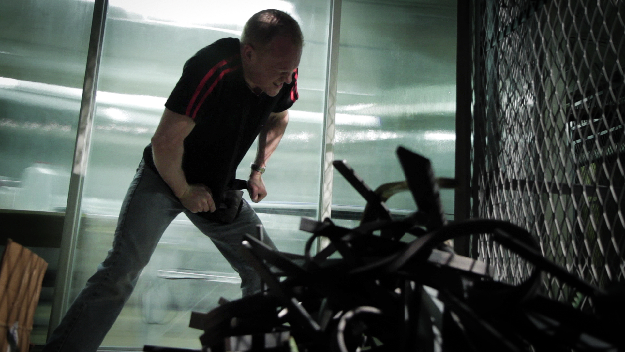 Chris Schoeck bending a horseshoe outside of his basement storage unit. Photo by Ryan Scafuro