With “Ricki and the Flash” director Jonathan Demme and scripter Diablo Cody ask: can a woman who abandons her husband, daughter and two sons during what should have been the best years of their lives regain their love and trust by providing them with one of the most original wedding presents that a mom could give?  While this makes the movie sound like a soap or a chick-flick, the film is so well staged and the lead performances so electrifying that “Ricki” should be considered must-see entertainment.

Not that Meryl Streep is capable of less than a riveting show, and here she has the more than capable assistance of her real-live daughter, Mamie Gummer, in an off-the-wall meltdown, and Rick Springfield as lead guitarist in a rock band known as the Flash and which is peopled by folks well past their third decade of life.  In fact Streep herself, at the age of sixty-six, does a smashing job portraying a rock singer of about fifty-five, exhibiting the talent with her vocal cords that she demonstrated as the witch in Rob Marshall’s “Into the Woods.”

The film is in the good hands of director Jonathan Demme, familiar to most moviegoers for the gory “Silence of the Lambs” among a host of other winners, and Diablo Cody, creator the TV series “The United States of Tara.”

Meryl Streep stars as Linda aka Ricki, who long ago abandoned her family which includes Pete Brummel, her ex-husband (Kevin Kline); son Joshua (Sebastian Stan), who surprisingly invites his mom to his wedding; Joshua’s brother Adam; and most significantly her daughter Julie (Mamie Gummer).  Julie’s situation echoes that of her mom in that her own husband had abandoned her, leading her to attempt suicide.  When Ricki flies from L.A. to her former family home in Indianapolis with scarcely a dollar to her name (her band plays great rock in the local tavern albeit with compensation leaving Ricki to eke out a living as a cashier in “Total Foods”), Julie goes ballistic, her tantrum against the mom who wasn’t there matching the decibels of the many loud and rhythmic beats of the Flash.

Though ex-husband Pete takes in everything with calm, Ricki must face the pronounced hostility not only of Julie but the silent contempt of her two now-grown sons.

Declan Quinn is behind the lenses, filming mostly in Rye, New York, doing an especially good job of capturing the climactic wedding scene which finds Ricki making it all up to everybody with her surprise gift.  The music is great, the performances lively, and all appear to be having a great time, Julie included, even when she shouts her contempt at her mother at the top of her lungs. 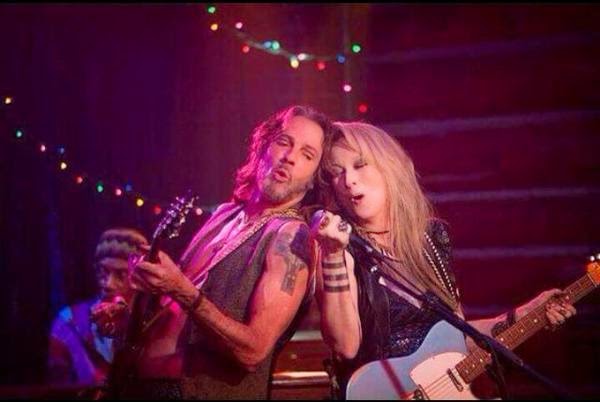