Ever since the town of Downers Grove built the high school on sacred land eight years ago, one senior from each graduating class has died in a bizarre way right before graduation.  Last year Chrissie (Bella Heathcote of Dark Shadows) and her friends witnessed one of the deaths first hand and the whole senior class is nervous as graduation is only days away.  Chrissie doesn’t believe in the curse, and tries to reassure her friends that it’s all just chalked up to kids making bad choices.  Her mother’s (Helen Slater) boyfriend wants to take her to Vegas for a week, so Chrissie and her brother Dave (Martin Spanjers of 8 Simple Rules) have the house all to themselves. Chrissy and her friend Tracy ( Penelope Mitchell of Hemlock Grove and The Vampire Diaries) get invited to a party by some footballers from a local high school. One guy in particular named Chuck (Kevin Zeigers of Gossip Girl) has his eye on her and when he gets a little too rough and almost rapes her, she gouges one of his eyes out; ruining any future he had playing football.  The guy and his posse track her and her brother down and make their lives hell. Graduation day is coming and Chrissie is starting to believe she will be the next victim of the Downers Grove curse, but she is determined to not die quietly.

The Good: The acting was good. The writing was surprisingly good. The dialogue was not riddled with popular slang or grandiose vocabulary words; they talked how regular people speak.  What other praise can I give since it’s partially Bret Easton Ellis?

The Bad: The title sucks. The Curse of Downers Grove sounds like an Encyclopedia Brown or Nancy Drew book.  The villains here are not the vengeful Native Americans ghosts, but the steroid pumped/cokehead jocks that are exacting revenge on Chrissie. Dude if you feel your life is already over, then end it. If football was the best you had going, then maybe this life wasn’t meant for you. Don’t take others down with you because you didn’t have a backup plan. While you’re at it, take out that abusive dad (Tom Arnold) who is punishing you because all their hopes and dreams have died because you lost an eye.  Eff that guy.

The surprise villain was not really a surprise. I knew who it was when they first appeared. That’s okay though, because the writing was pretty top notch. I don’t think I would watch it again, but it was a fairly decent suspense thriller.

Acting: B
Story: B
Technical: C
Total Rating: B-
Reviewed by: JM Willis 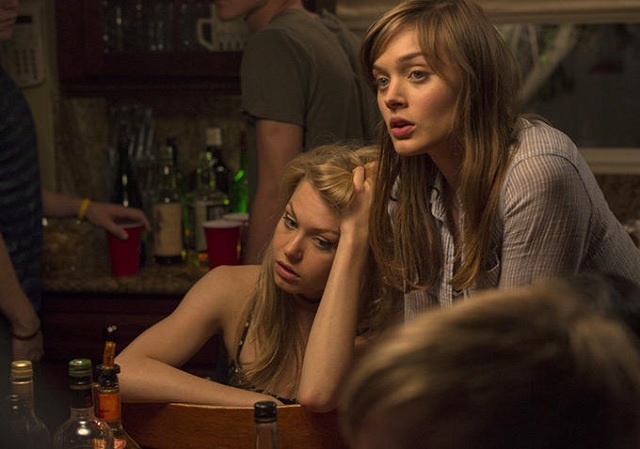