Former sheriff’s deputy Rick Grimes is continuing on his quest of unrelenting personal sacrifice to protect the people he cares about in the newly released deleted scene from the fifth season of AMC’s ‘The Walking Dead.’ The clip, which was originally planned on being included in the season’s third episode, ‘Four Walls and A Roof,’ was unveiled by Anchor Bay Entertainment. The video celebrates the anticipated release of ‘The Walking Dead: The Complete Fifth Season,’ which is set to be distributed by the home entertainment and production company on Blu-ray + Digital HD and DVD on Tuesday.

The deleted scene from ‘Four Walls and A Roof’ follows Father Gabriel Stokes, who’s played by Seth Gilliam, as he enters the church and apprehensively watches the survivors as they prepare their weapons for their upcoming planned attack. The priest then approaches Rick, who’s played by lead actor Andrew Lincoln. Father Gabriel is distrustful of the former deputy and the group heading to the school, and reveals that he regrets divulging what he knew about the survivors there. But Rick reassures him that if he didn’t disclose the information, he would have coerced him into telling him what he wanted to know.

Father Gabriel then asks Rick if he’s ever intentionally hurt people on a large scale, like he did to his parishioners. When the priest also asks what Rick plans on doing to the people outside of the church, the former officer tells Father Gabriel he already knows, and that he killed his parishioners because he didn’t want to die.

‘The Walking Dead: The Complete Fifth Season’ features all 16 episodes from the horror series’ latest season on five discs. The Blu-ray and DVD feature three hours of insightful and provocative bonus features that give viewers yet another inside glimpse into creating the fallen world of the Walkers and the souls brave–and crazy–enough to attempt survival. The suggested retail price for ‘The Walking Dead: The Complete Fifth Season’s Blu-ray + Digital HD is $79.99, and $69.98 for the DVD, and pre-book is now available on such outlets as Amazon.

‘The Walking Dead’ is based on the comic book series written by Robert Kirkman and published by Image Comics. During its fifth season, the basic cable network’s acclaimed horror drama series introduced such notable characters from the graphic novel as Father Gabriel and the cannibalistic Hunters. The fifth season’s cast also includes Chandler Riggs, Lawrence Gilliard, Jr., Emily Kinney and Andrew J. West. The first half of ‘The Walking Dead’ Season 6, which will include the initial eight of the season’s 16 episodes, will premiere on AMC on October 1.

Watch the deleted scene from ‘The Walking Dead: Season 5’s third episode, ‘Four Walls and A Roof,’ below. 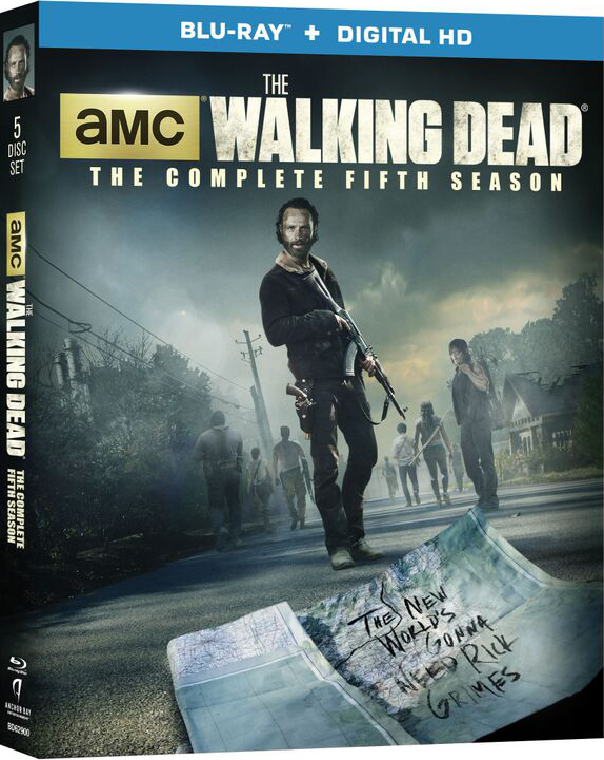