In presiding over food competitions, the judges look for originality, taste and speed.  Film competitions are similar. While you can’t generally taste a movie and since speed does not count (unless the picture is a turkey), originality is prized by all those (meaning people of mature taste) who do not want to see the same plot over and over.  “East Side Sushi” is a prime example of an original. While this is not the only movie about Japanese cooking—there is David Gelb’s “Jiro Dreams of Sushi, a documentary about the 85-year-old master chef considered the master of the art form in Japan—“East Side Sushi” may be only secondarily about the joys of raw fish but principally about a trajectory followed by Juana (Diana Elizabeth Torres) undergoing a tough stretch of life as a single mother in East Oakland who is fed up working a fruit cart and has higher horizons.

Ms. Torres gives a terminally charming performance, one which should be remembered at awards time when hopefully enough critics and other groups have been able to see this remarkable indie.  Torres inhabits the role of Juana, who contrary to what Donald Trump says about people of Mexican extraction gets up at three in the morning, buttons up her small daughter Lydia (Kay Jade Aguirre), moves out of her digs with her dad Apa (Rodrigo Duarte Clark) and heads for the earning morning fruit market to pick up mangos, pineapples, and other edibles even insisting on using fresh-squeezed limes rather than the bottled kind as she apparently respects every food item she prepares.

Fed up with the routine, particularly after being mugged and beaten and freed from the day’s take, she spots a sign on the window of a Japanese restaurant, “Help Wanted,” but her ambition to become a chef, in this case a molder of sushi, seems impossible as it’s as difficult for a woman, especially a Latino, to land a job with a boss that says his customers demand authenticity.  While she works in the kitchen washing dishes, she befriends Aki (Yutaka Takeuchi), one of the three chefs, and shows him what she can do with a rolling kit.  As Aki encourages Juana, even letting her out of the kitchen into the sushi floor though her dream is pushed aside by boss Mr. Yoshida (Roji Oyama). “You are hired to work in the kitchen.”

Maybe Juana really knows how to make the dishes that would take a normal person years to perfect.  As Martin Rosenberg’s camera closes in on the rice, the fish, the seaweed and the delicate but sure hands that combine the ingredients, we in the audience would not be blamed for watching our mouths water for a taste of Rock ‘n’ Roll, Unagi Avocado, California, and assorted alimentation made with tuna and salmon and halibut and red snapper.

Torres, who resembles a young Salma Hayek (take a look at Hayek and Torres on the IMDB and you’ll be stunned by the similarities), carries the movie with an appeal that could warm up a cold cheese enchilada or turn a sashimi into a grilled, Seattle salmon.  She is ably assisted by Yutaka Takeuchi, whose character could be her future husband, Rodrigo Duarte Clark as her hard-working dad, and bubbly Kaya Jade Aguirre as her young and sleepy daughter. 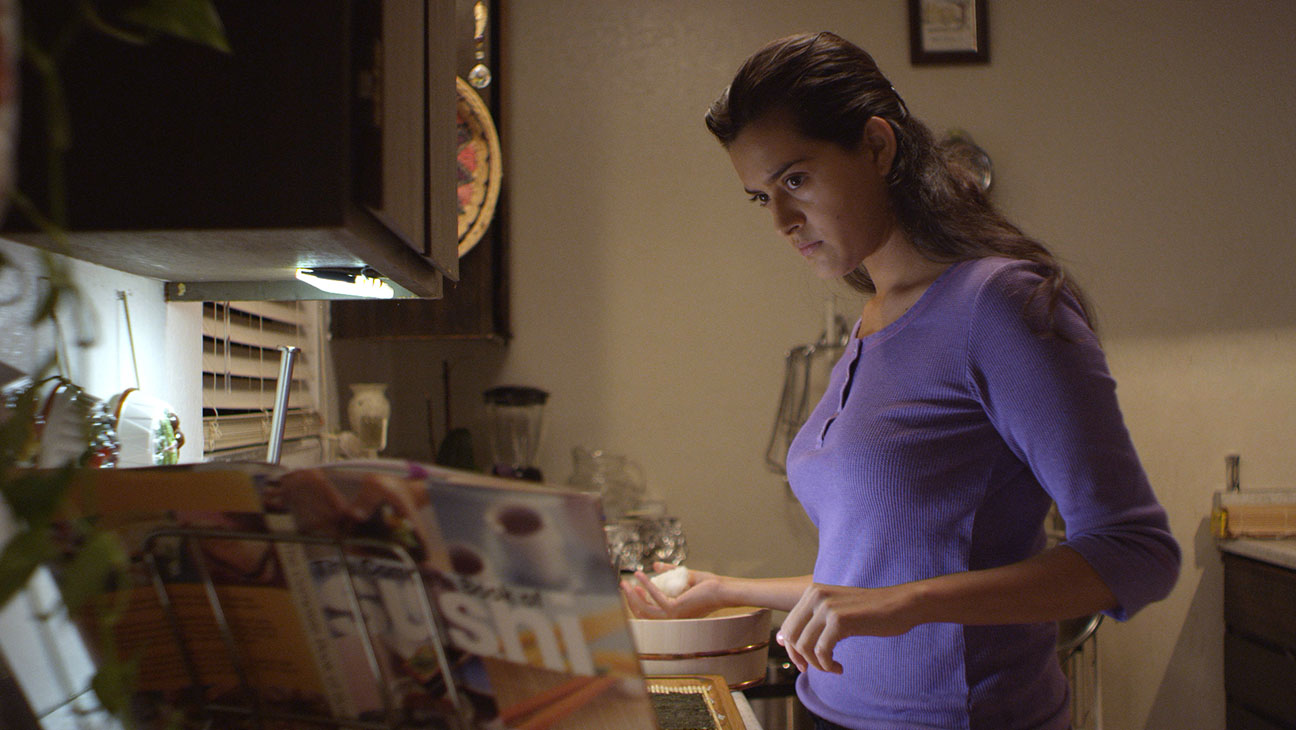