Molly Moon and the Incredible Book of Hypnotism Movie Review

Molly Moon (Raffey Cassidy) lives in an orphanage with her best friend Rocky (Jadon Carnelly Morris), and several other kids. Mrs. Adderstone (Lesley Manville) who runs the orphanage is mean broad who loves punishing the children for any little thing. She orders Edna the cook (Celia Imrie) to feed the children fish-head soup for a week for raiding the kitchen one night.  Molly goes to the library and finds a book on hypnotism. A shady acting young man named Nockman (Dominic Monaghan) is there looking for the same book, but Molly takes it back to the orphanage.  She starts off small by hypnotising Mrs. Adderstone’s pug puppy Petula. Next she hypnotizes Edna into making delicious food. Finally it’s Mrs. Adderstone with whom she makes fun and child-like. Molly wants Mrs. Adderstone to sign a clause on her and Rocky’s file that they can’t be adopted separately, but remembers she promised Rocky to help him at a local talent show and leaves before the signing; but it’s too late and Rocky is furious with her.  He meets with a rich couple named The Alabasters (Ben Miller and Sadie Frost) and gets adopted without Molly.  Molly wants to find her friend, and runs away to London to track him down. She hypnotizes a few people at a posh hotel and gets a room to stay. The concierge knows what’s up, but allows Molly to stay as long as she promises not to hypnotize the rest of her staff.  She finds Rocky, but he tells her he doesn’t want to go. Not sure what to do, she gets the idea to audition for a television show and hypnotizes the showrunners to fire their star and cast Molly instead. The problem is that Molly can’t sing, but when she manages to hypnotize the public through the television, she becomes rich and famous.  Nockman with the influence of his evil mother (Joan Collins) kidnaps Petula and orders Molly to help them rob a bank.  All Molly wants now is to go back home with Petula and be with the kids back at the orphanage.

The Good: Are you kidding me?

The Bad: I can’t even begin to tell you how much I hated this film. Think of Annie taking place in a rip off of a Harry Potter side story.  They even rip off the Harry Potter font in the main titles.  One thing I really hate about it is the music. It’s like they commissioned 2 songs and only played those two throughout the film (some bullshit about being yourself or liking yourself); it was how I’d imagine hell, and all you get to listen to is 2 songs from Kids Bop or some crap.

I was almost positive the writer was an only child.  The writing and the characters just feel like they’re made up by a kid who was told they’re brilliant by their overly-doting parents when the kid is mediocre at best. I actually did some research and found that’s not true, she has a brother; that’s almost like the same thing. Molly Moon is a shitty character. She becomes an instant celebrity because she learned how to hypnotize people into thinking she’s great. She can’t sing, she has no other talent, she whines and complains a lot, she expects everyone to love her just because she’s nice to people. She gets butthurt because her friend gets adopted without her and goes to London seeking him out so she can bring him back to the orphanage, never considering that maybe he’s happy. He’s not, but still, what a selfish bitch.

Most of the actors in this film were probably doing a favor for a friend of theirs. I would’ve been embarrassed to put my name on this thing. I get that some celebrities want to make a film their kids would enjoy, but even if I was one of their kids, I would tell them straight up that their movie sucks. God have mercy on you parents that have to sit through this. 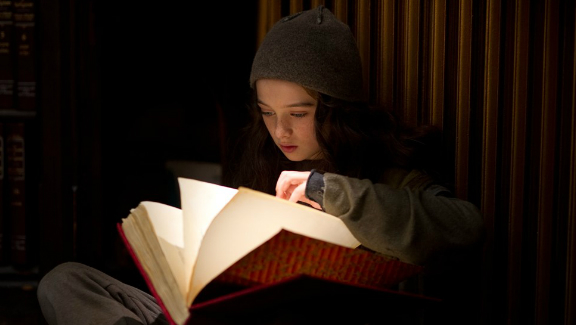