Knowing who you can truly depend on during times of emergencies is often imperative to a person’s emotional, mental and physical survival. That’s truly the case with the two main characters in the comedy, ‘Deano and Nige’s Best Last Day Ever.’ The two title characters, who became friends in elementary school 15 years ago when Nige was the new student in their class, reunite when he once again needs Deano’s help. In honor of the film’s distribution on VOD, iTunes and DVD this Tuesday, September 8, Shockya has an exclusive new clip from the comedy, titled ‘Murder Alibi.’

When Nige (Academy Award Winner Bret McKenzie) accidentally runs over and kills an innocent hitchhiker, he only has one person he can turn to; his former best friend, Deano (comedian Hamish Blake). Problem is, Deano is the last person in the world who you would want to rely on in a crisis. As the old saying goes — Nothing comes between friends like a dead body.

Shockya’s exclusive clip for ‘Deano and Nige’s Best Last Day Ever,’ ‘Murder Alibi,’ shows the reunited friends bonding over the traumatic experience of Deano helping Nige cover up the murder. The clip follows Deano as he worryingly pulls up in front of Nige’s house the morning after the accidental murder. Deano tells his friend to go inside and get ready for work, like everything’s normal and nothing happened the night before. He also reminds Nige again that their alibi is that they spent the night drinking at his house. After the two then woke up the next morning, Deano drove Nige back home so he could go to work. Nige hesitantly agrees to the plan, but is still in shock over what he did.

‘Deano and Nige’s Best Last Day Ever’ was directed by ‘Out of the Blue’s helmer, Robert Sarkies, who also co-wrote the script with Duncan Sarkies. Watch ‘Murder Alibi,’ Shockya’s exclusive clip from the film, below. 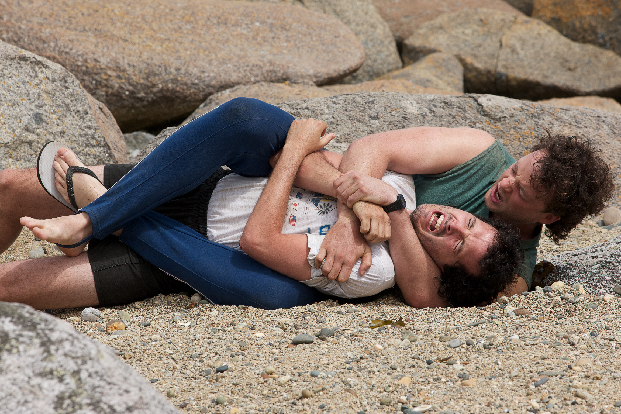