Battling to establish your unique stance and personality in a developed community that already has some merits, but still fighting to find a way to captivatingly function, can be a difficult challenge, but it is an obtainable goal for those who are determined to find their rightful places. That not intriguingly applies to the main protagonist, Clint, in the new independent film ‘Cooties,’ but also in its subgenre, the horror comedy. Not only does the troubled lead character set out to prove his life’s worth in his stalled literary career, as well as his ability to attract the woman he likes, the film interestingly proves its worth in an otherwise inconsistent subgenre that doesn’t always skillfully mix scares with humor. The movie, which was helmed by first-time directors Jonathan Milott and Cary Murnion, and is slated to open in select theaters and On Demand on Friday, proves that when people determinedly put their minds to something, they can achieve their goals and creatively infuse their lines of work with alluring new ideas.

‘Cooties’ follows Clint (Elijah Wood), an aspiring writer struggling with the first draft of his novel, who moves back in with his mother in his hometown of Fort Chicken, Illinois, after living in New York City fir several years. To make money while working on his book, he accepts a job as a substitute teacher at his childhood elementary school, where he reunites with his former crush, Lucy (Alison Pill), who’s also working there as an educator. The two instantly click as they catch up on each other’s lives. However, they’re both unaware that the chicken nuggets that have been prepared for the school’s student lunch that day has been infected with an illness that turns the first girl who eats them into a ravenous zombie. After becoming sick, the girl bites one of her classmates, which causes a chain effect amongst most of the students, and leaves them driven to attack everyone in sight and eat their flesh.

Clint, Lucy and some of their colleagues, including her boyfriend, Wade (Rainn Wilson), the insensitive and arrogant gym teacher; the socially inept science teacher, Doug (Leigh Whannell); Tracy (Jack McBrayer), who’s afraid to admit his true feelings and sexual orientation because of his concern over how people will perceive him; and the right-wing conservative, Rebekkah (Nasim Pedrad), band together to help each other survive. While the educators rarely get along and understand each other, they soon realize that if they want to survive the outbreak amongst their students, which Doug concludes is only affecting those children who haven’t yet gone through puberty, they must learn how to bond and fight together.

The script for the intriguing horror comedy, which was co-written by Whannell and ‘Glee’ scribe, Ian Brennan, who also portrays Vice Principal Simms, features a well-developed script that effortlessly infuses relatable humor into a horrific situation that the characters are unexpectedly forced to contend with. ‘Cooties’ distinct characters, from the socially and professionally hapless Clint to the persistently optimistic Lucy, all react to the sudden and unexpected pandemic in their own relatable ways. They most notably relying on humorous banter with each other, so that they feel as though they’re still in control of their lives and situation.

Wood grippingly portrays Clint, who Whannell and Brennan interestingly scripted to be an engaging anti-hero, as trying to fearlessly lead his new colleagues to safety. The lead character powerfully represents everyone’s desire to make up up for their professional and personal failures by striving to find a plausible solution that instantly solves their dilemma. Pill was also well-cast as Lucy in ‘Cooties,’ as the Tony Award-nominated actress naturally infused her character in the horror comedy with the desire to protect, and be nice to, everyone else. Lucy is alluring shown to want to protect her students and colleagues, even though she’s still trying to figure out how to safeguard her own feelings and what she truly wants. She relatably ponders whether she should pursue a romantic relationship with her former classmate or continue to commit to Wade.

Lucy’s consideration comes as Wilson intriguingly crafts the gym teacher as an alpha male who’s the complete opposite of what his girlfriend continuously represents. Wade only comprehends that he needs to be more caring towards other people when he finally realizes that he may lose his girlfriend because of his inconsiderate actions. The gym teacher’s continuously brash and arrogant sentiments and actions towards Clint, who he surprisingly perceives to be a potential threat to his romantic relationship with Lucy, is a stark, yet equally intriguing, contrast to Whannell’s intriguing portrayal of the socially inept Doug. While the elementary school’s science teacher truly yearns to be accepted and understood by his colleagues, the actor’s skilled understanding of his character’s feelings of being misunderstood by his fellow educators helps provides intriguing comedic relief in such a horrific situation.

Not only do the actors provide captivating performances and humor to ‘Cooties,’ which is a rare exceptional entry in the subgenre of horror comedies, as it’s often difficult to craft a story that both terrifies audiences and makes them laugh, but the visual effects are also enthralling to watch. The film’s production designer, Thomas William Hallbauer, who has experience working in the genre after working on the 2009 movie, ‘The Revenant,’ creatively worked to make each room in the elementary school, where most of the story takes place, seem unique and equally terrifying as the teachers try to protect themselves from their students. From the openness of the school’s auditorium, where Clint and his colleagues try to hide from the kids, to the janitor’s space in the basement, where the group attempts to plan an escape route, each room appears as though they fit in the same building. However, each room does provide their own distinct challenges in allowing the teachers carry out their escape.

‘Cooties’ stunt coordinator, Matt Berberi, also helped craft the horror comedy’s visionary visual effects through the alluring but strenuous fight sequences and physicality the teachers endured while protecting themselves from their students. From the initial hostile attacks on the playground that really showed how the illness started to change the children’s impulses, to their increasingly aggressive chases of their teachers through the school’s hallways and classrooms, Berberi effortlessly created sequences that show how the children’s violent behavior is leaving a brutal effect on the adults’ will and ability to survive.

Wanting to make a positive and memorable impression on those who look up to you for inspiration is a compelling motivation to make your work unique and meaningful. Wood naturally built his characterization of Clint in ‘Cooties’ to show how that the protagonist is not only struggling to become a visionary author, in order to prove he was able to escape his small hometown, but also a leader who can effortlessly save his colleagues once their students become infected. Not only does the independent film grippingly chronicle Clint and the other characters’ motivations, but the visual effects, from the intriguing production design to the enticing stunts, makes ‘Cooties’ the rare example of how equally humorous and chilling horror comedies can actually be. 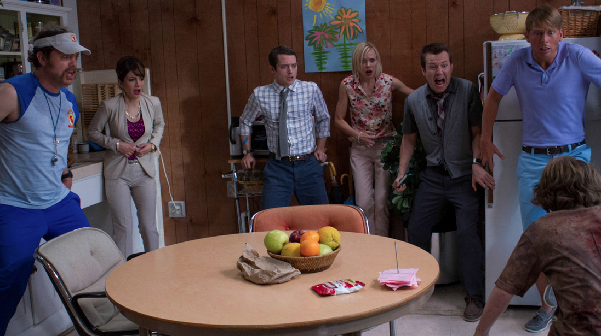