For those of us who think that if a man is a multimillionaire—meaning in possession of one hundred million, like Robin Williams or several billion like Facebook founder Mark Zuckerberg—his problems are over, we learn from literature, theater and the movies that this is simply not true.  In fact when the Greeks wrote and performed tragedies and Shakespeare likewise, the richest, most celebrated and most powerful people appear to have more woes than people who are poverty-stricken, homeless and hungry.  Think of Hamlet, Clytemnestra, Othello, and Medea, all who might today be considered aristocrats, yet all having seemingly insurmountable problems.  Jesse Eisenberg’s multi-billionaire character Mark Zuckerberg is seen immediately in David Fincher’s wonderful “The Social Contrast” alienating his college girlfriend to such an extent that in five minutes she leaves him forever.  And don’t forget Zuckerberg’s ferocious fights with former partners who insist that he screwed them out of their proper compensation and position.

Such is the case with Steve Jobs, who, played here in Danny Boyle’s new film, deserves a place in a theoretical CEO Hall of Fame for his promotion first of the Macintosh computer in 1984, which morphed into today’s iMac and his role in the dissemination of the iPad and the ubiquitous iPhone.  But he is depicted as far from the mellow aristocrat who made his fortune even after dropping out of the prestigious Reed College and traveling to India in 1974 to study Buddhism.  His portrayal by Boyle, accented by a dynamic script from Aaron Sorkin, displays the man as so petty and argumentative that he refuses to put money into the account his ex-girlfriend, Chrisann Brennan (Katherine Waterston) despite her having to go on welfare, and denies paternity despite overwhelming DNA odds of young Lisa who was born to Chrisann out of wedlock.

The movie is divided into three segments, but since it concludes in 1998 Boyle does not deal with Jobs’ death from cancer and respiratory failure in 2011, nor do we learn anything about his childhood which would have given us some indication of his interest in computers.  The story is filled with arguments and make-ups as between Jobs, who was heading Apple Inc., and the man who ultimately fired him, John Sculley (Jeff Daniels); between Jobs and Apple co-founder Steve Wozniak (Seth Rogen); and high-pressure business debates during almost endless backstage melodramatics between Jobs and his lieutenant, would-be shrink and working wife, Joanna Hoffman (Kate Winslet—with a perfectly nailed Polish accent).

The dialogue-driven picture has a few gems, the best of which is this dialogue between Jobs and subordinates.  Jobs chastises them for taking two weeks longer to finish a project than God did to make the universe.  He is one-upped by an employee who retorts, “Yes, you’ll have to tell us how you did that sometime.”

You come away wondering not only how such important and rich people can have problems that could conceivably lead them to depression and suicide, but whether it’s possible to be a CEO of a major corporation and not consider yourself at least a tin God.  Though Michael Fassbender contributes a potential Oscar-winning performance (one critic opines that the Academy should not even bother voting: just mail him the Oscar), the fragmentation is disturbing and would grate on segments of the audience who like their bio-pics complete without being broken up into simply melodramatic moments.  There are some good, restrained special effects, which may or may include the audience for Jobs’ presentations—which number approximately one thousand people clapping, stamping their feet, and treating the businessman like a rock star. 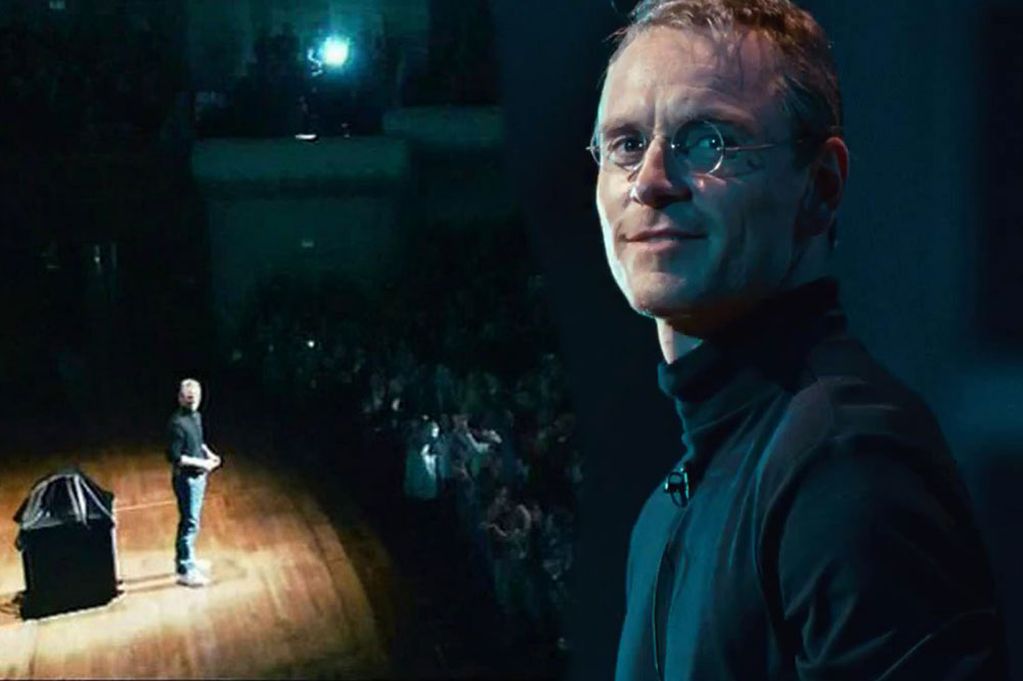