A Christmas Horror Story takes place in Bailey Downs, where Dangerous Dan (William Shatner), the local radio DJ hosts a Christmas show. He tries to keep the holiday spirit alive as a mass murder/hostage situation is at the town mall during a food drive. The film is a Christmas themed horror anthology that weaves in and out to keep the audience on their toes.

We start off with a trio of teenagers are filming a school project at the high school, where a brutal murder occurred a year ago involving a girl and boy.  The teens watch police footage of the scene of the crime, and the police investigator points out that someone wrote on the walls in blood: For unto us a child is born, unto us a son is given – which is a passage from Isaiah describing the birth of Christ.  The school used to be a convent that housed unwed mothers.  Molly (Zoé De Grand Maison) tells of a 15 year old girl who claimed to be a virgin, became pregnant and died during an abortion.  Molly becomes possessed by the ghost and tries to seduce the two boys that are locked in with her.

A father makes his family go on a last minute trip on Christmas eve to meet an old aunt. While bored out of their minds in the old lady’s museum of a mansion, his wife and two kids discover a figurine of Krampus, the anti-Santa Claus.  The aunt throws them out after the son breaks the figurine, and they drive off into the snow. Dad avoids hitting a large creature and drives into a snowbank. Dad gets his stomach ripped by an unseen force and the son gets dragged away into the darkness. The family finds sanctuary in an empty church. They realize Krampus is real and after all of them.

The police investigator on leave after discovering the murder of the two teens, is out with his wife and son, as they venture into the woods to pick out a Christmas tree. The son gets lost in the woods and when he’s found, he’s not the same kid.  He’s acting weird and never saying a word. He stabs his dad in the hand with a fork after dad tries to take his plate of spaghetti away. Mom receives a phone call from the owner of the land where they took their tree, telling her that her son is a changeling, and she must find a way to lure it back to the woods in order to get her son back.

Meanwhile up at the North Pole, Santa (George Buza) has to fight off his elves whom have become killer zombies, in order to make it in time for his Christmas run.

The Good: There’s not a lot of downtime with the pacing. I didn’t look down at my phone at all during the film. The stories are a lot of fun. The Changeling story was by far the best. That kid is a scary little dude.  The CG and make-up effects were top notch.  The battle of Krampus vs. Claus was hilarious and epic.

The Bad:  Though the story involving the teens locked in the haunted school kept me engaged, although it didn’t feel very Christmas-y. A murder occurred on Christmas and it circled around the birth of Jesus…it got a little bit religious, which made it somewhat uncomfortable. Throwing an abortion tale in there felt unnecessary and was a bit of a downer. Here you have a few comedic horror stories and throw in this sack of drama. The scene in the Changeling where the little kid starts molesting his mom was possibly pushing some line; and it definitely had some ick-factor.

RLJ Entertainment was smart for getting a head start on Universal’s Krampus, which will be released in 2 more months. The make-up effects of the demon are awesome, and just in time for Halloween so we get a double dose of holiday fare. 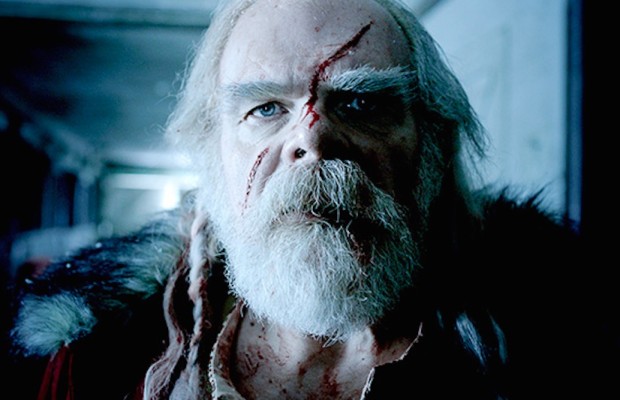