America is not the world, as we may have noticed by the headlines.  As imperfect as our democracy is with its threats of government shutdown (which makes you wonder whether democracy is the best form of government), our filmmakers can shoot what they’d like.  And isn’t that the most important facet of “rule by the people”?  Not so in Iran.  While filmmakers are restricted to certain subjects and certain manners of presenting their material, that censorship is not as bad as the way the Islamic regime inflicts capital punishment on people for the likes of homosexuality and simple robbery.  While director Jafar Panahi takes aim on the inadequacies of Iranian law and how the government prevents human beings from expressing themselves (or even dressing themselves if you’re the wrong gender), he gets around the government’s ban on critical films by disguising them.  Here Panafi poses as a taxi driver, apparently free from the house arrest he had been under for such works as “This is Not a Film,” depicting a day in his life while in jail awaiting an appeals court verdict, and “Closed Circuit,” about a woman fleeing from the authorities who lands in the house of a secluded screenwriter.

Panahi continues his modus operandi by once again depicting what looks at first like routine life in one day, as he drives a taxi with a camera on the dashboard as if he is filming cinema verité, i.e. actual passengers who do not realize who this cab driver is.  He is almost certainly scripting his latest movie.  (We are not absolutely sure of this, since he refuses to list members of the cast for fear of government retribution for what he as screenwriter put into their mouths.)  Each “passenger” has something critical to say about the “saintly” powers in Tehran.

His cast provide comedy, sentimentality, and tragedy.  A female schoolteacher argues with a man over Sharia law and wonders why so many people have to be executed for what she considers minor offenses—if homosexuality can be in any way considered an offense.  Most interesting, a TV bootlegger sells films of Woody Allen and various other Hollywood pics  to a man who is a film student and who asks Panahi to recommend some.  Panahi replies that every movie is recommended watching!  The bootlegger, pretending to be working with Panahi, gets to sell far more pirated films by this fake association than he could do on his own.  American movies appear to be out of bounds, or perhaps only the ones objected to by the government are verboten.  Panahi’s niece, who awaits her uncle to give her a ride, sounds off in a loud tones about her school day.  Her teacher assigned her to shoot a short film but the movie must not include sad themes or anything dealing with politics or economics.

Panahi is not allowed to leave Iran though you’d think the Ayatollah would be happy to get rid of him, but think of what he could say if he could chill in America or Germany!  “Taxi” won the Golden Bear at the Berlin Film Festival, which the highest prize awarded at that annual event, and the FIPRESCI Critics’ Prize (or Fédération Internationale de la Presse Cinématographique). “Taxi” deserves accolades simply for Panahi’s chutzpah in making it in a country that could come down hard on its critical filmmaker.  Yet as a movie it is not all that interesting, coming across as didactic rather than dramatic.  One wonders whether its two prestigious awards would have been made if a similar film came out of the U.S. or Western Europe, where there are no restrictions on the creativity of director, scripter and cast. 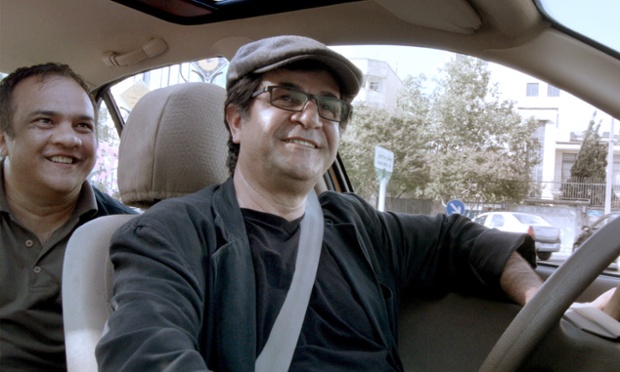