Professor Mike Lawford (Nicolas Cage) has a habit of disappointing his young son Charlie (Jack Fulton) by missing important events. His estranged wife Kristen (Sarah Wayne Callies) is usually the one to save the day and still make Mike look like a good dad. It’s Halloween and Charlie really wants to go to the street fair with his father. His mom takes him out so that he won’t miss much, and then Mike finally comes home late, but with still enough time to catch the end with his son. Charlie had been acting strange recently. He draws pictures of a shadowy figure that he claims to see outside his window. Mike offers to buy Charlie an ice cream, and tells him to stand right by him so he won’t get lost in the crowd. Charlie asks his father a cryptic question, “Can we pay the ghost?” Mike looks down after paying the vendor, and Charlie is gone.  After a year of searching for their son, they are starting to lose hope, but are tormented by hallucinations of their son in random places.  Mike has discovered a pattern of child disappearances that happen around Halloween.  Two other sets of parents have missing children and both claim they uttered the same question as Charlie before they disappeared.  Mike and Kristen hire a medium to investigate their son’s room, and is murdered by an unseen force before their eyes. Kristen becomes possessed by an entity that carves a Celtic symbol into her arm. They discover the malevolent ghost is the restless spirit of a woman burned at the stake for witchcraft and her children burned in front of her.  Mike knows he must cross over to the spirit world in order to get his son back or lose him forever.

The Good: A Halloween horror flick that doesn’t involve a serial killer. Hooray for variety!  The acting by Nicolas Cage showed heart, and wasn’t over the top like many of his recent cinematic atrocities….Well a couple scenes he did, but it’s what audiences expect and still love him for doing. Sarah Wayne Callies is a much better mother than her role in The Walking Dead, but I couldn’t help yelling “Stay in the house Coral (Carl)!”

The Bad: Too much time was spent on the parents and not enough on the far more interesting subplot of the ghost and her children.  Somehow the expert on antiquities gets in bad with the ghost and gets offed after offering some information on Celtic symbolism.  She didn’t give any real crucial information that would help defeat the ghost, but still gets killed. A medium gets killed also for not disclosing any real information, only kind of a rad death where she gets charred from the inside.  The”priestess” at the celtic ritual the couple questions was a bit of a convenient character; this well of knowledge.  It felt kind of like a cheap way to wrap up the story in order to get to the climax.

I enjoyed Pay the Ghost for being a popcorn flick. October is my marathon month of horror films, and it’s a good addition to the family’s film fest.

Acting: B
Story: C
Technical: B
Total Rating: B-
Reviewed by: JM Willis 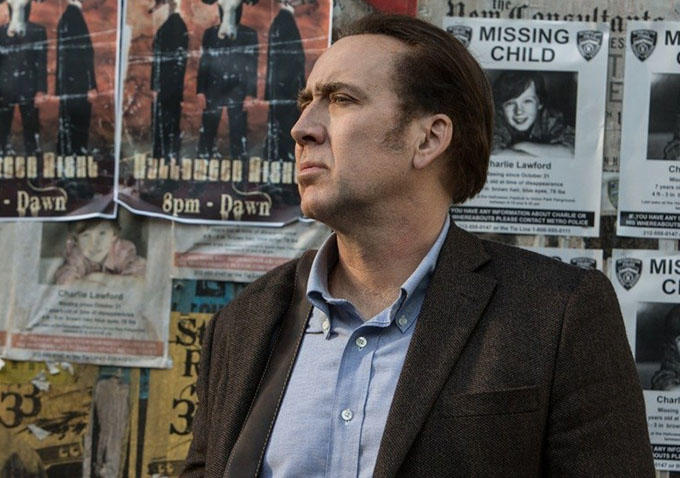