People are often admired and remembered for the compelling contributions they offer to their communities through their work and personal relationships. But the lasting respect that most well-known leaders command can at times be the result of the intimidation and harrowing acts they often engage in as they strive to capture and maintain success. That intriguing and chilling determination to achieve admiration and power by any means necessary is compellingly chronicled in the new biopic, ‘Legend.’

The drama, which is set to be released in select theaters by Universal Pictures on Friday, was written and directed by Brian Helgeland, and is based on the book ‘The Profession of Violence’ by John Pearson. The crime thriller enthrallingly chronicles the true story of the London-based Kray twins, who worked as gangsters and notoriously took whatever means necessary to get what they wanted, even if their actions went against their moral beliefs.

Set in the 1960s and based on a true story, ‘Legend’ follows Reggie Kray (Tom Hardy), a nightclub owner in London’s East End who uses his business as a front for his illegal gangster lifestyle. The leader commands fear and respect from both the people who work for him and his rivals throughout the city. While Reggie is garnering admiration from those in the London underworld, his identical twin brother, Ronnie (also played by Hardy), isn’t taken as seriously. Ronnie’s not as respected as his brother, as he’s mentally unstable and openly gay, the latte of which hasn’t yet been accepted by society. While Ronnie is determinedly striving to become as feared and respected as his twin, they’re both targeted by the police, particularly Detective Superintendent Nipper Read (Christopher Eccleston). The police’s interest increases even more when the American Mafia make a mutually beneficial alliance with the twins.

Reggie’s personal life also improves when he meets Frances Shea (Emily Browning), the teenage sister of his driver, Frankie (Colin Morgan). Much to the dismay of Frances and Frankie’s mother, the gangster courts the young woman, and the two fall in love. Frances, who narrates the biopic, chronicles her instant attract to Reggie, and her equally harrowing and growing concerns about how she doesn’t fit into his life. Frances’ doubts are particularly driven by Ronnie’s possessiveness of his brother, and Reggie’s unwillingness to give up his illegal activities.

As ‘Legend’s writer and director, Helgeland commendably focused on adapting the emotional struggles of the Kray brothers, both in their work and with Frances, that were initially presented in ‘The Profession of Violence.’ In the drama, Reggie and Ronnie are both enthralling presented as men who are completely committed to, and immersed in, commanding respect for their work, while also deeply caring about what the people they care about think of them, notably Frances and their mother. Unlike many gangster movies that thrive on glamorizing the violence that’s gleefully committed by its main characters, Helgeland intriguingly emphasizes that the fights the twins engage in, which were captivatingly choreographed by Julian Spencer, leaves the Kray brothers questioning how their antics impacts those around them.

The filmmaker also smartly cast Hardy to play the dual roles of the drastically distinct Kray twins in ‘Legend.’ The BAFTA Rising Star Award-winning actor perfectly embodied the unique personality traits that made Reggie and Ronnie so notorious and diverse. Hardy effortlessly captured Reggie’s natural allure and charisma, which instantly charmed almost everyone he interacted with, from Frances to his business associates. Reggie is often shown to be the commanding Kray brother, as he had no qualms about asserting his authority whenever necessary to get what he wanted.

The performer’s instinctive portrayal of Reggie’s at-times domineering personality perfectly balances his equally enthralling representation of the more insecure Kray brother. While Ronnie often knows what he wants, most notably having as equal a say in the family business as his twin, Hardy emphasizes how his fragile emotional state often holds him back from achieving his goals. The distinct divide in how the brothers contemplate their desires, achievements and overall lives is powerfully showcased by Hardy’s admirable, unique and complete perspectives and understanding of both men.

Browning also gave a commanding performance, as she showed that Frances was strong-willed enough to assert that she wouldn’t be subjected to fade into the background of Reggie’s life. Helgeland’s smart decision to make Reggie’s girlfriend, and eventual wife, the narrator of, and have a large field of depth in, a biopic that explores her husband and brother-in-law’s lives, proves what a large influence she had on their decisions. The actress effortlessly emphasized her character’s instant attraction to Reggie’s charming ways, and her subsequent growing realization that he and his brother would always thrive on the dangers of succeeding in their business. Browning also gave a truly captivating and equally subtle insight into the mental consequences that arose from Reggie’s growing emotional distance from her once they were married, as he strived to maintain control of his expanding influence and success.

Hardy and Browning’s intriguing and sympathetic portrayals of their respective characters are also powerfully and insightfully highlighted by Dick Pope’s sunning cinematography. ‘Legend’s Director of Photography skillfully showcases the actors’ emotions as they connected to their characters motivations through his stunning and revealing camera angles. Whether he utilized large, sweeping shots to capture all of the physical action during the fight sequences between Reggie, Ronnie and their opponents, or more intimate, long and stable close-up shots of Reggie and Frances as they naturally connected with each other, Pope creatively highlighted the ever-changing views in the gangsters’ world.

Much like the distinct nature and motivations of the Kray twins throughout their lives, ‘Legend’ is an intriguing and unique cinematic adaptation of the successes and struggles the gangsters faced as they strived to achieve, and maintain, success. Helgeland captivatingly focused on adapting the emotional struggles Reggie and Ronnie both contended in their work and with Frances, who were elegantly and intriguingly embodied by Hardy and Browning in their emotional representations. Combined with Pope’s distinct focus on the actors’ emotions and physicality as he captured their performances on camera, the biographical crime thriller is a humanizing portrayal of what happens when people’s addiction to achieving success and respect from the people in their lives ultimately alienates them from those they care about the most. 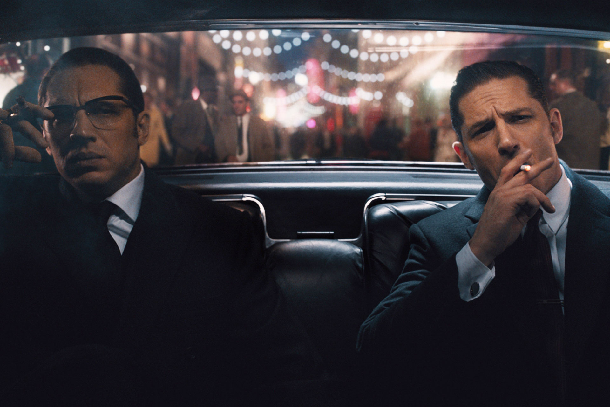 Cancel reply
The Huntsman: Winter’s War Gets A New Trailer
The Boss Gets A New Movie Poster
To Top