Perhaps the most famous stage direction invented by Shakespeare is “Exit, pursued by a bear,” which in Act III scene iii of “The Winter’s Tale” presages the death of Antigonus.  We don’t know whether in the original 17th century version the Bard used a real trained bear, or a man in a bear’s costume, or something that worked as a special effect at London’s Globe theater, but ol’ Will would be amazed if he could have seen what happens to Leonardo DiCaprio in “The Revenant.”  Director, co-writer and producer Alejandoro González Iñárritu, well known by cinephiles for his “Birdman,” which features Michael Keaton as a popular actor trying to deal with the problems of his current life, now puts his skill on creating a dramatic biopic of fur trapper Hugh Glass (played by DiCaprio) who, in 1823 in an area which became the Dakota Territory, is brutally attacked and mauled by a bear while scouting for an expedition.  What emerges during the long 156-minutes’ narrative may bring kudos, even an Oscar nomination for cinematographer Emmanuel Lubezki—who films in such exotic areas as Chile’s Tierra del Fuego and also parts of Alberta,  British Columbia and Montana—but is an agonizing film to sit through.  Relatively static, with dialogue that consists largely of a variety of grunts and groans from the mauled Glass, “The Revenant” (which means “he who returns from the dead”) is a revenge story involving largely a two hundred mile chase in the snow by a half-dead Glass and by the object of his fury, John Fitzgerald (Tom Hardy), who leaves him for dead, kills his half-Indian son, and robs him of his furs.

In the novel by Michael Punke (2002) on which the movie is based, Glass is motivated principally not by revenge but simply by a desire to get his furs back.  But revenge makes for a more engaging movie, or so the team that assembled the movie must have thought.  But box office does not look promising, with the film bringing in an audience of DiCaprio fans but with those folks perhaps leaving the theater frustrated with the slow progress and dialogue-challenged sounds coming from the theater’s array of loudspeakers.

Solid cinematography aside, “The Revenant” does give us a picture of life on our continent in the early part of the Nineteenth Century, absent McDonald’s and ever-expanding co-ops and condos.  The one riveting scene in the film—and the only one—is that of Glass being mauled over and over by a big brown bear who doesn’t take “no” for an answer when his prey remains alive but goes on the attack a second time.  He should have quit while he was ahead since we in the audience know who is going to win the fight, but as the bear might have said to his spouse had he remained walking in the snow, “You should have seen the other guy.”  While the racist fur trader John Fitzgerald (Tom Hardy), no lover of Native Americans, puts his weapon where his mouth is and kills Glass’s son, the stage is set for the big chase, as Glass stalks his prey using the silly rifles which, in addition to arrows and knives served about all the weapons of mild destruction at the time.  As Lubitzki’s lenses move from Fitzgerald’s camp, always on the lookout from Pawney Indians with their perfectly aimed arrows, then back to a solitary Glass, we sit in assorted stages of agony wondering why DiCaprio passed on a script starring a bear and instead took on the guise of a wolf—on Wall Street. 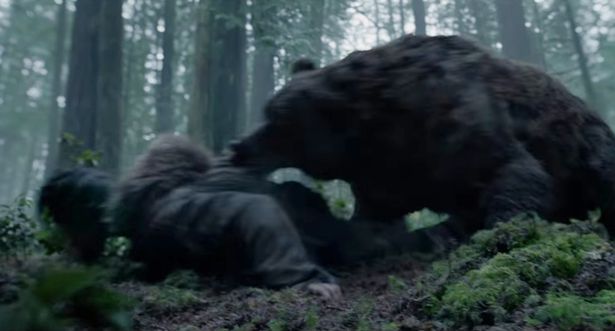