Jackson (Scott Eastwood, Texas Chainsaw 3D) is a Civil War vetarn trying to live a quiet life in the Colorado territory with his young wife Alexsandra (Camilla Belle,The Ballad of Jack and Rose). One night his wife is kidnapped by a group of Mexicans, who burn down his home. He sets out on a journey to track down the kidnappers and bring his wife home. Along the way he runs into a mysterious gunman named Ezra (Walton Goggins, The Hateful Eight), who murders anyone and everyone on site, saving Jackson, but not without tormenting him. Suffering from wounds, he makes his way to a farm inhabited by an old war friend Benjamin Carver (Danny Glover, Lethal Weapon franchise) and his granddaughter Rebecca (Nesta Cooper, Heroes Reborn). They offer their help, but somehow dredge up some long forgotten memories that awaken something deep inside of Jackson.

The Good: The cinematography of the Canadian landscape is beautiful, thanks to D.P. Dean Cundey (Back To The Future; Apollo 13). The story is pretty timely as we hear more often about soldiers dealing with PTSD.  How did  Civil War soldiers deal with these issues when it wasn’t even defined at the time? Little details I liked, for instance Jackson tying up his horse whenever he got down. Watching old westerns, the cowboys and gunslingers never tied up their horses, but somehow were always hanging out waiting for them when they got back. Walton Goggins is becoming one of my favorite character actors. His screen time is short, but he gives it his all and a true joy to watch.

The Bad:  The scene where the native Americans got Jackson in their sweat lodge and somehow they were going to learn something about him. They didn’t speak each other’s language, how was that gonna happen? That scene was unnecessary and poorly written.  The big reveal of Jackson’s past felt rushed. It could’ve easily been pushed further towards the end or a chance for Goggin’s character to be more prevalent instead of disappearing completely.

Diablo is a hollow western. There’s some good ideas and potentially good characters, but it’s too short and too rushed. The film could’ve been saved for an episode of the reboot of Amazing Stories. If they worked on the character development some more, they could quite possibly have a TV series on their hands; but again, this needs more work. 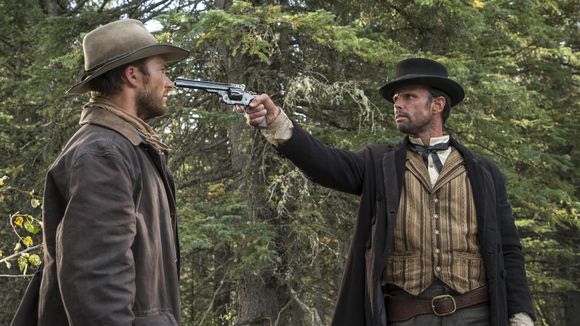