Rosencrantz (Gary Oldman, The Dark Knight) and Guildenstern (Tim Roth, The Hateful Eight) are mostly remembered as the two minor characters in Hamlet.   It’s not really a spoiler since their fate is in the title – they die, as most of the characters in Hamlet do since it is a tragedy. However writer/director Tom Stoppard puts a comedic spin on the story and the characters sort of bumble around on horseback as they flip coins which happens to land on heads 92 times in a row. This causes Guildenstern to conclude that there’s something wrong with reality.  They meet a troupe of “tragedians” lead by The Player (Richard Dreyfuss), who somehow transport the duo to the castle in Elsinore where they interact with all of the major characters in the play Hamlet. They meet with King Claudius (Donald Sumpter, Game of Thrones) to find out what is making Hamlet (Iain Glen, Game of Thrones) such a moody emo. Rosencrantz and Guildenstern unfortunately get caught up in the murder and mayhem that is Shakespeare’s Hamlet, which will never allow you to experience the play the same again.

The Good: Funny dialogue, great acting by all. I loved hearing Gary Oldman and Tim Roth in their interviews talk about them loving the script so much that they couldn’t wait to run lines and rehearse scenes, even after they already filmed the scene. Richard Dreyfuss gives some humbling advice to those who have ever wanted to get into acting; and though it’s rather harsh, it needs to be heard.

The Bad: This film got mediocre reviews when it was originally released mainly because it doesn’t really work as a film. It was written for the stage and that is where it belongs. The interviews on the special features were far too long. I would’ve just appreciated a Q &A with each actor on the film itself, but then it got into current projects (which are old news now) and questions on career goals. Fans and theatre dbags might like all that long winded crap, but I got bored fairly quickly.

I saw this film originally when it was released and watching it again was like the first time. Though it was meant to be seen on stage, I feel the material is important enough to experience any which way possible. The dialogue is funny and intelligent. It’s philosophical and existential. I don’t know how to textually fellate this film enough.

Acting: A
Story: A
Technical: A
Total Rating: A
Reviewed by: JM WIllis 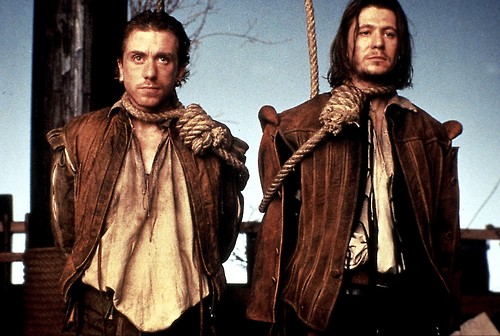