Major John Cafferty (Tamoh Penikett, Battlestar Galactica) leads a squad of soldiers into the mountains of Afghanistan in order to retrieve a top secret artifact. The mission turned into a bloody battle and the whole squad awakens in a military hospital, all suffering from amnesia.  With therapy and drugs, the hospital’s chief Dr. Troutman (Colm Feore, The Borgias)  tries to get the soldiers’ memories back and find out what they found in that cave. Cafferty and his next in command “Guts” (Lesley-Ann Brandt. The Librarians) start to get their memories back and suspect the hospital is possibly a facade for something sinister.  They must recruit the help of their fellow soldiers before they succumb to the mind altering drugs the hospital has got them taking, and find the reason for Dr. Troutman’s obsession with the mysterious artifact. Cafferty and his remaining team must use their military skills to find a way to escape with their minds and bodies in tact.

The Good: The strong female characters Guts and Masters (Julia Voth, Package Deal), though their names and personalities are dripping with cliches.

The Bad: The evil corporation is called Majestic Global Dynamics. Why didn’t the writers just take Prestige Worldwide and end the film with the  f—ing Catalina Wine Mixer? The title is misleading or just wrong. I don’t remember anything that would justify calling it Painkillers. The fight choreography, especially the one towards the end looked like it was orchestrated by some backyard wannabe Wrestlemania fan. The references to the Roswell crash was predictable and dumb.  The artifact is boring. The CG effects are uneventful. The ending is sappy and lame.

The DVD cover art and synopsis make this film seem more interesting and exiting than it is. It’s one of those forgettable Syfy movies that air mid-day which only loners and stoners will channel surf through. 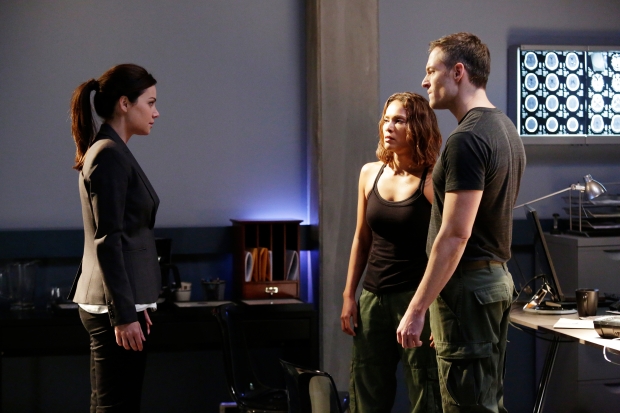