Jason Momoa is fighting for survival in the newly released first look photo from his upcoming film, ‘Braven.’ The photo was distributed by Highland Film Group, which will be handling the survival thriller’s international sales at the Berlin International Film Festival. The movie, which recently wrapped principal photography in Newfoundland, Canada, has not received an official release date yet.

Momoa, who will next be seen playing Aquaman in the anticipated superhero film, ‘Batman v Superman: Dawn of Justice,’ will be joined by Garret Dillahunt, Stephen Lang, Zahn McClarnon, Brendan Fletcher, Jill Wagner, Sala Baker, Teach Grant, Fraser Aitcheson and James Harvey Ward in ‘Braven.’ The thriller’s lead actor also served as a producer on the movie with Michael Nilon, Molly Hassell and Brian Andrew Mendoza. Stuntman and stunt coordinator Lin Oeding made his feature film directorial debut on the movie, which was written by Thomas Pa’a Sibbett and Michael Nilon.

The thriller follows Joe Braven (Momoa), a humble logger who’s residing along the U.S./Canada border. When he’s confronted by a group of deadly drug runners in his secluded cabin in the mountains, he must do everything in his power to protect his family. Little do the elite drug runners know the unassuming man they’ve encountered has an impressive bite colliding two dynamic forces – one fighting for the lives of his family, the other for the love of the kill.

Check out the first look photo of Momoa as the title character in ‘Braven’ below. 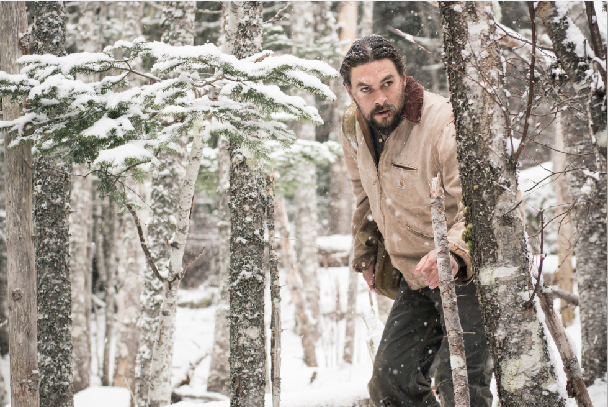