People around the world often form their own distinctive views on society around them, depending on their own unique experiences and relationships. The way they cope with, and express, those individual opinions, however, is often shown through the way they grippingly engage their friends, family, peers and society. Up-and-coming musical band, IIIZ, is one such group that intriguingly conveys their thoughts and feelings through their distinct blend of alternative, EDM and electronic vocals and instruments.

The innovative band, which hails from Palm Desert, California, the birthplace of the groundbreaking festival Coachella, proves it’s not afraid to take risks with their sound and music on their new self-titled debut album. The group’s lead singer, Ison Van Winkle, who wrote most of the group’s songs with his bandmates, alternates singing on the record’s tracks with co-lead singer, Mari Brossfield. Her contributions to the electrifying songs offer a melodic and endearing female touch to her fellow vocalist’s bold and captivating voice, as they both sing about the difficulties of conquering life’s biggest struggles.

‘IIIZ’ begins with the high-energy, electronica and hip-hop-infused song, ‘Get Away,’ which features the vocals of Sen Dog of Cypress Hill. The track, which includes high-pulsating sympths and a hard-rock guitar, questions what they’re truly looking for in life, before humbly admitting that they don’t really have true goals. Sen Dog grippingly sings of his determination to push himself to get to a better place. As he notes that he’s also trying to set himself apart from his contemporaries, he also powerfully admits that he knows he can’t run away from all of the troubles in his life.

The alternative band’s next entry on their upcoming album, ‘The Light,’ proves to be their most memorable and intriguing effort. Brossfield offers her vocals on the track, which also features a classical and soothing guitar introduction. She sings about how she’s waiting for the person she loves. The song, which is interestingly driven by a 1980s-inspired dance beat, powerfully notes that she wants to make her own choices, but her true destiny is also still calling her. As she expresses that she sees the light that encourages her to overcome her struggles, Van Winkle begins singing at about two minutes into the entry. The vocalist, whose voice is reminiscent of Depeche Mode, notes that he sees her approaching him, and there isn’t anywhere he can go to escape their fate together.

‘Sugar’ is the next electronic-driven song on the band’s debut album, which features Van Winkle singing once again. He encourages people to pursue what they want in life, and also inspires them to explore the whole world that’s available for them to discover. While the track features an inspirational message, overall, it unfortunately features forgettable lyrics and instruments that may make people forget his advice.

Van Winkle once again leads ‘IIIZ’s next electronic-driven entry, ‘Retrospective,’ which is intriguingly driven by a soulful guitar introduction. Once again led by Van Winkle’s vocals, the musician grippingly admits that he never knew who he was, and asks what he should say to reconnect with the woman he loves. Brossfield then powerfully responds that she’ll never be found, leading to his realization that their connection will never be rekindles. Unfortunately, the song’s lyrics soon become repetitive as they collectively sing about retrospective being something they’ve always wanted in their lives.

‘Retrospective’ then leads into the band’s next original track, ‘Color On the Run,’ which also features Van Winkle leading the vocals. After beginning with a distinctive drum beat, the vocalist sings about how he wishes he was the man his mother said he was. The singer also contemplatively notes how he’s tirelessly searching for the meaningful life he hasn’t yet discovered.

The band’s upcoming album then delves into the rock guitar-driven song ‘Want,’ which also features Van Winkle’s alternative and enthralling voice leading the vocals. Combined with Brossfield’s soulful voice, the two singers question if the other person still loves, and wants to be with, them. Despite the relatable message that people are always struggling to find someone they truly connect with, the track’s alluring instrumentals unfortunately overpower the sing’s vocals.

The next two entries on ‘IIIZ,’ ‘Analyst’ and ‘Epic Dreams,’ are most powerfully driven by their haunting and gripping guitar and electronic keys. While Van Winkle and Brossfield’s vocals are also difficult to decipher on the two entries, the lyrics for both songs are captivatingly relatable. The singers harrowingly admit that they feel isolated, as the people in their lives are too analytical of the world around them. That harrowing scrutiny makes them feel lost and unable to formulate their own ideas and beliefs.

With it’s electronic introduction and rock-infused guitar, the album’s next song, ‘Man in the Background,’ features Van Winkle alluringly singing about his dream of obtaining a better life for himself. The track’s up-lifting, inspirational and upbeat tempo effortlessly leads into the EDM-driven ‘Straw Dogs,’ which features Brossfield as the opening vocalist. The song also proves the band’s versatility as instrumentalists through their powerful, up-beat electronic tone and guitar.

‘IIIZ’ then intriguingly morphs into the alternative-driven track, ‘I Never Knew,’ which is driven by an alluring guitar introduction. Van Winkle intensely admits that the woman he loves saves him from everything he does, so he questions why she’s running from him, as well as what she sees inside of him.

The California-based band then delves into the powerful entry, ‘Cure For Curiosity,’ which is driven by a soulful guitar and drum introduction. Van Winkle insists that the woman in his life will never control him, before Brossfield philosophically ponders if there’s a way to get around their present life, as they both want to find a cure for their pain.

The final song on the band’s self-titled debut album ends on a devious and assertive track, ‘Manic Pixie,’ which instantly captures audiences’ attention through its powerful synths. The at-times angry vocals are cleverly reminiscent of Franz Ferdinand’s singing as IIIZ’s song morphs into psychedelic, EDM-driven instrumentals. Van Winkle powerfully sings that the woman he loves told him that everything will be alright, but they soon question each other when they realize that they never really knew each other.

People around the world often form their own distinctive views on the world around them, depending on their own unique experiences and relationships. The way they cope with, and express, those individual opinions, however, is often the way they grippingly draw attention from their friends, family, peers and society. IIIZ is one such group of people that intriguingly expresses their thoughts and feelings through music, particularly their distinct blend of alternative, EDM and electronic vocals and instruments. The innovative band proves it’s not afraid to take risks with their sound and music on their new self-titled debut album, as they sing about as the difficulties and rewards of conquering life’s biggest struggles.

For more information on IIIZ, visit the band’s official website. Listen to the alternative, EDM and electronic group’s full-length debut album, and watch the official music video for ‘Manic Pixie,’ below. 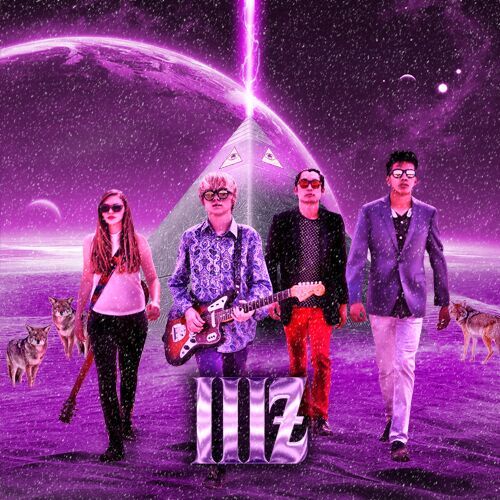