Manipulating time in order to save and protect mankind’s sense of morality, consciousness and bonds, so that humanity won’t collapse on itself, has always been a gripping and alluring concept that society has always strived to achieve. The riveting, yet equally elusive, theme of people continuously striving to change their fate is set to drive the intense second season of the critically acclaimed hit adventure mystery Syfy series, ’12 Monkeys.’ A new trailer promoting Season 2, which will carve its own unique and groundbreaking narrative path, has been released.

The upcoming episodes of ’12 Monkeys’ will also emphasize how the characters strive to redeem themselves following their betrayals in all of their most interpersonal relationships, throughout all incarnations of their lives. The new video offers viewers a glimpse into those manifestations, as it shows that Season 2 will be set across multiple time periods. The characters will face conflict in the present day, a dystopian future and various eras of the past 60 years.

Besides watching the new trailer, viewers can also prepare to witness the nature of madness unfolding during the sci-fi show’s second season by streaming Season 1 now on Hulu. Viewers can also catch up with the adventure drama on the show’s page on Syfy’s official website. The drama, which developed a dedicated viewer following during its debut season, is set to return to the basic cable network for its sophomore season on April 18 at 9/8c.

The second season of ’12 Monkeys’ will continue to follow James Cole (Aaron Stanford) as he strives to save humanity. During the drama’s first season, which was set in 2044, Cole was chosen by fate to travel back in time to stop the apocalyptic conspiracy of the Army of the 12 Monkeys. In the process, he formed a bond with a brilliant immunologist from our time, Dr. Cassandra Railly (Amanda Schull), who became his strongest ally against the enigmatic organization.

During Season 2, Cole and Railly will be confronted with circumstances that alter their perspectives, and turn them against each other, despite their common goals. In spite of their conflict, an early victory has been achieved, which altered history.

Aided by their explosive band of comrades, who are enemies by nature, but cohorts by necessity, Cole and Railly must try to overcome their fierce conflict and increasingly disparate ideals. They’re working through their differences, as they travel to different points in time, all in order to stop the new reprehensible plot of the 12 Monkeys. They share the same goal of uncovering, and putting a stop to, the 12 Monkeys’ plan before time literally runs out, so that they can save their reality.

The connections between all the characters across the various timelines are slowly exposed during the second season of ’12 Monkeys.’ The upcoming episodes prove that there aren’t any easy answers to the complicated questions that must be solved along the way. The second season of the show, which is inspired by Terry Gilliam’s classic 1995 sci-fi movie of the same name, already seems like it will expertly live up to its Season 2 tagline: Change the past. Save the future.

Watch the new trailer, and check out the new image, from the anticipated second season of Syfy’s acclaimed mystery drama, ’12 Monkeys,’ below. 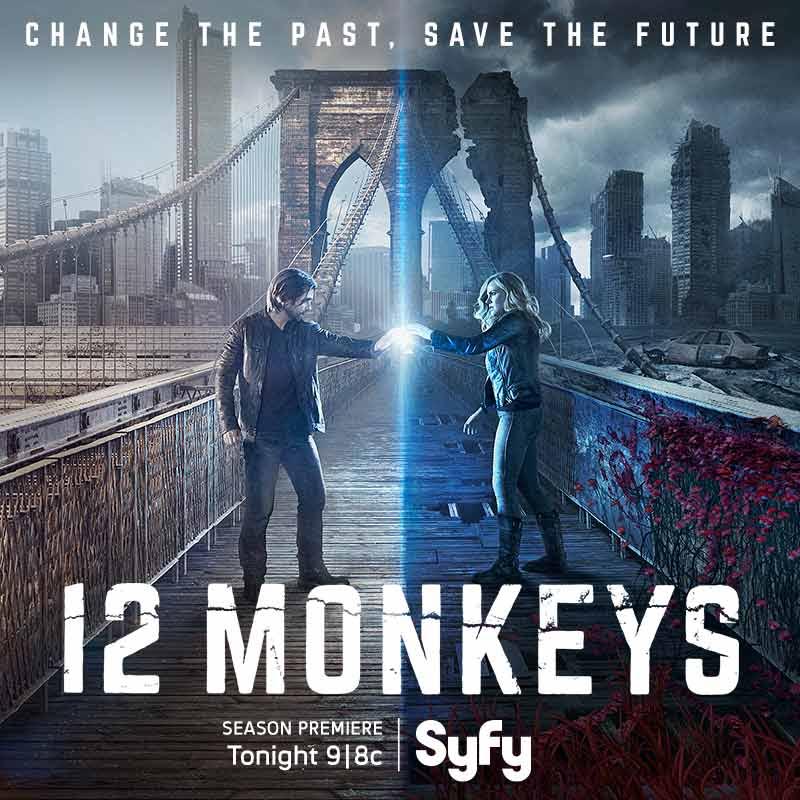