Can you imagine a serious movie about a serious subject that uses a South Park cartoon to great effect?  That results from the genius of Terence Graham Parry Jones, better known as the Welsh director, Terry Jones: comedian, screenwriter, actor, film director, historian and author. He is best known as a member of the Monty Python comedy troupe.  And if you’ve never seen a Monty Python movie, you don’t know how delightfully intellectual and yet how seemingly unserious a comedy can be.  With “Boom Bust Boom” Jones, in a script he co-wrote with Theo Kocken and co-directs with Ben Timlett and Bill Jones, holds that one hundred percent of what you learned in Economics is false, which is the kind of overstatement you can expect from someone deeply involved in Monty Python skits.  What’s really fake, though, is that economists, with a few exceptions like one Hyman Minsky, do not assume that people are irrational. Hey, Donald Trump is leading in the Republican polls.  What does that tell you about human rationality?

Hyman Minsky, as Jones and Kocken bring out, noted that economic models are fragile because of human irrationality.  When corporate cash flow rises beyond what is needed to pay off debt, euphoria develops, and soon thereafter debts exceed what borrowers can pay off from their incoming revenues, which in turn produces a financial crisis. As a result of such speculative borrowing bubbles, banks and lenders tighten credit availability, even to companies that can afford loans and the economy subsequently contracts.  That’s what the 2008 crash was all about.

Nevertheless,“Boom Bust Boom” exaggerates in its insistence that economic theory does not take into account the inevitably of crashes, a natural product of capitalist business cycles.  Even in 1958 when I took a course in General Economics, we learned about business cycles including the sad fact that boom-and-bust cycles will occur regularly.  Crashes, we learned, can be moderated by strong government regulation, an idea that was anathema to President Ronald Reagan, who is responsible for massive deregulation—though Reagan’s name surprisingly does not get a mention in this movie.

“Boom Bust Boom” is a documentary for people who do not run to box offices to buy into non-fiction film, and with good reason.  The typical doc features interviews, talking heads who, despite being informative simply talk to the camera or to one another.  But this doc is loaded with Monty Python-esque creativity.  Alan Greenspan appears in person and in caricature, admitting his role in bringing about the 2008 crash, which resulted largely from the policy of euphoric banks to grant mortgages to people who could not afford the housing they bought.  Spokespersons are presented not only in real life shots but in caricatures that look remarkably like them, as do the cartoonish versions of Nobel prize winning New York Times writer Paul Krugman and also Daniel Kahneman. Same goes for journalists Paul Mason and John Cassidy.

If you think that only Michael Moore and “Super Size Me”’s Morgan Spurlock can entertain as well as enlighten, you’ll be pleasantly surprised by the creativity of the animation department of “Boom Bust Boom,” and if you’re an investor, you’ll be wary of taking wild chances when the U.S. economy is running on all cylinders.  Moderation is the key in economics as in all things.  The Greeks knew that 2,500 years ago.  Why don’t we know it now? 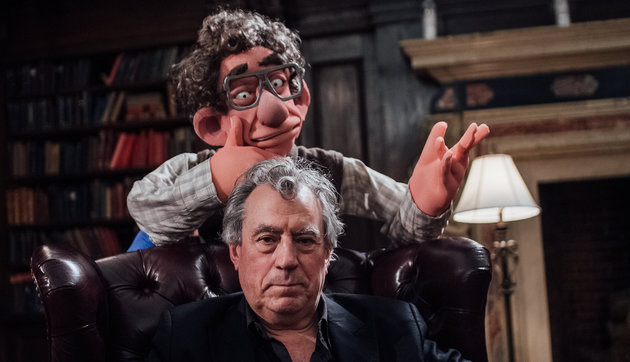