Does France deal with troubled youths better than we in the States?  You’d have to ask someone who’s acquainted with juvenile detention here.  But Emmanuell Berot, whose “On My Way” deals with a woman who hits the road with a grandson she hardly knew, gives us a glowing picture of the Gallic way with wayward youths.  The adult prison she describes looks as bad as anything here, but the juvenile treatment may bear comparison with Norway’s—whose Scandinavian system gives a small apartment with a kitchen even to mass murderers like Anders Breivik.  If you’d like to have a private masseur make you “radiant” and a caseworker who spends a good deal of his time with just you, then go to France (if you’re under 18) and commit a crime.  You could do worse than receive punishment there, especially if your case is heard by a charming albeit stern judge played by Catherine Deneuve—who starred in “On My Way” as well

“Standing Tall” which had the honor of serving as opener of the Cannes Film Festival in 2015, features Ms. Deneuve as a warm, sympathetic judge in juvenile court, but the real star of “La Tete haute) is Rod Paradot as Malony, who gives a sizzling performance as a troubled teen who was abandoned by his mother (Sara Forestier) at age six, spends years in foster homes (which understandably leads some charges to violence), and manages almost to avoid being tossed in jail by a judicial system that believes kids can be saved—as can French taxpayers, to fund a generous penal system costing considerably more than school.

In a fit of rage, Malony’s mom (Sara Forestier), poor, uneducated, and unable to cope, abandons her son to Florence Blaque (Catherine Deneuve), who is committed to rehabilitating Malony and has the support of a semi-socialist French economy that commits €800 a day to set each youth straight.  You can see where the money guys simply by watching how well the case worker, Yann (Benoît Magimel), treats the young man, and it does not hurt that Magimel looks like a clone of Sean Penn.  Never mind that Malony treats Yann as bad as he must have treated his foster parents, the judge, and just about everyone concerned about him: Yann is strong enough to realize that Malony has had a rough childhood.  Yet it is not principally Yann’s attention but the love he receives from Tess (Diane Rouxel), a gamin-like daughter of Malony’s teacher (private tutoring, no less!) that will set him straight, though his sudden rehabilitation in the movie’s final quarter hour seems less than convincing.

Changing a feral young man into a responsible member of society is not easy.  It took the better part of ten years for Malony, from the time his mother dumped him at the age of six (when played by Enzo Trouillet) until he is a responsive member of society.  Ultimately this drama of social realism is made believable by a firecracker performance from Rod Paradot in a stunning breakout role. 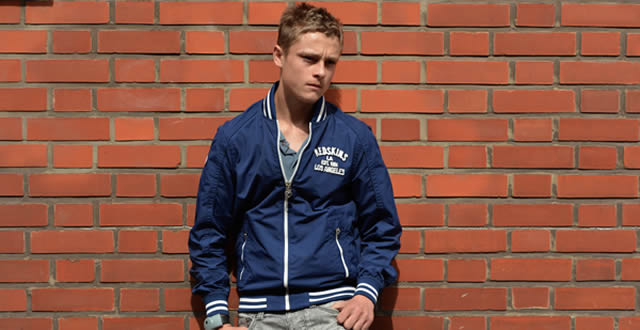