Fathers want what’s best for their sons, but sometimes, while they mean well, they cannot accept what their boys are really like.  Such is the case in Paddy Breathnah’s “Viva,” which boasts a sensational performance for Cuban actor Héctor Medina in the title role.  If you doubt that his dad, a former boxer who served jail time for killing a man, would appreciate his son’s choice of profession, you would be right.  However in this feel-good work, which though filmed in Havana is Ireland’s nominee for an Academy Award, a conciliation is possible between the ignorant, rugged man who, when first meeting the young lad’s performance in a bar featuring the city’s drag queen is so embarrassed and disgusted that he punches his son in the face.

Viva is the showbiz name for Jesus (Héctor Medina), a handsome and only slightly feminine man who ekes out a living dressing the hair of middle-aged and older women and also styles the wigs for the female impersonators in the Havana gay bar.  The club is owned by a supportive Mama (Luis Alberto García), who takes a liking to Jesus and encourages him to dress in drag and perform.  Jesus, who like other drag queens hustles for men on the side, is a disaster the first time around, but his unemotional performance is hardly the reason for getting punched by his dad, newly released from jail.

And his jailbird dad, ironically named Angel (Jorge Perugorría) is not only a murderer but an alcoholic who beat his own wife and was never really there for Jesus.  Now fifteen years later, he is about to come around after a series of conversations with Jesus, though the folks surrounding the duo would like nothing better for Jesus to throw his father out on the street.

If you’re reminded of all those articles that say America is moving politically left—that a majority of Americans now support gay marriage and gay rights because most people even in the red states know people who are gay—you see this effect dramatized, though on an island a short distance from our own shores.

Perhaps the epiphany that brings Angel around to supporting his son, who is struggling the maintain his true identity, occurs when Angel asks Jesus, “You never liked pussy?” and gets the reply, “Never ever.”  Angel realizes that DNA notwithstanding, Jesus is not his clone, but a person who has a different temperament from him. The result: a Hallmark moment.

The climactic moment occurs when Jesus delivers an enthralling, lip-synching performance of Massiel’s “El Amor,” that brings down the house.  “Viva” is filled not only with heartwarming moments but with a boisterous, energetic series of skits by the performers in the Havana bar.  The photography shows us a city that is so dilapidated, with the parade of 1950’s Oldsmobiles, that you have to wonder what the revolution was all about. 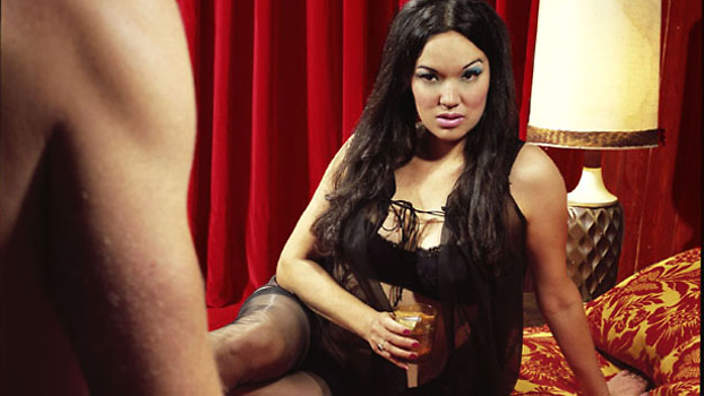