Apr 29, 2016 JENNIFER CORCORAN, Larry Cedar, SHE SINGS TO THE STARS

Hope can be found in the most unexpected places, as anything is truly possible, is the powerful message that Larry Cedar is affirming in his new drama, ‘She Sings to the Stars.’ The indie film, which features the ‘Deadwood’ alum as a magician who’s setting out to inspire people to pursue their goals, is motivating audiences in its first clip. In support of the movie’s captivating message, Shockya is graciously premiering the video, ahead of the drama’s wide theatrical release later this year.

In addition to Cedar, ‘She Sings to the Stars,’ which was produced by Circeo Films, also features Fannie Loretto and Jesus Mayorga. The drama marks the feature film writing and directorial debuts of Jennifer Corcoran. The indie was filmed on location in New Mexico, in the Rio Puerco Valley around Cabezon, as well as in a Santa Fe warehouse.

The drama’s story is about drought, a collision of cultures and hope. Without water, a Native American grandmother, Mabel (Loretto), lives alone in the desert. While her half-Mexican grandson, Third (Mayorga), is caught between worlds, a white down-on-his-luck magician from Los Angeles, Lyle (Cedar), finds himself lost at her door.

‘She Sings to the Stars’ was named Best Feature at the Toronto Independent Film Festival, and was also honored with the Audience and Best Actor Awards at the Vermont International Film Festival last fall. The indie then screened during last week’s Albuquerque Film and Music Experience, and has also been selected by such festivals as Montreal World, Red Nation in Los Angeles, Blow-up Arthouse in Chicago, Queens World in New York and American Indian in San Francisco. With the drama’s official theatrical release being set for later this year, the filmmakers are currently conducting a crowdfunding campaign, via Seed & Spark, in order to help pay for marketing, music and other essential costs.

One of the drama’s producers, Jonnie Corcoran, described the project as being “a quintessentially New Mexican film and story.” The drama’s writer and director also chronicled the process of how she developed the story for the film, revealing that she “first met Mabel-the grandmother character in the film-in a dream. Mabel said, ‘It’s time to sing the song. Listen. It will take you four years.’ I followed the clues, constructed three life-size, newspaper-stuffed dressed figures of the characters and listened to them whisper the bones of the story.”

Watch the premiere of the first clip, and check out photos, from ‘She Sings to the Stars’ below. 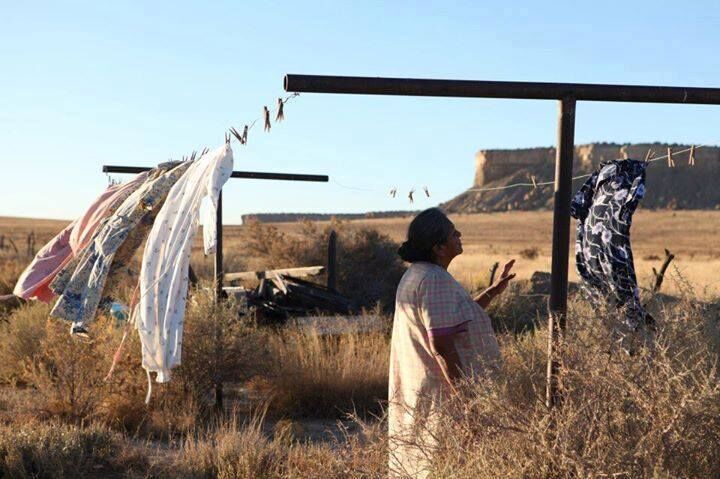