Ella (Mischa Barton, The OC) and her best friend Molly (Emily Atack, BBC’s The Inbetweeners) decide to break into Ella’s fiancee Brad’s (Ed Cooper Clarke, Downton Abbey) storage unit to look for a diary; one thing that Ella must obtain right then in the dark of night to make or break her relationship. Molly is good at breaking into things, so Ella convinces her friend to do this one deed for her.  The unit is located in the Eezzee Storage, a hole in the wall facility where the rich can be cheapskates when storing their valuables; and Brad’s vault happens to be on the bottom floor where you need a key to access.  After venturing into the dark, unkempt basement, they find the unit; however there is some creature inside that attacks Molly. Ella must find a way to escape the creature, while getting help to save her friend. On her way up towards freedom, she runs into several people whom also have storage units.  The creature manages to pick off a few of them until the survivors discover what The Hoarder is collecting in the Eezzee storage.

The Good: The make-up effects were quite good, but that’s all the praise I can give.

The Bad:  The concept has been done and the characters were too dumb to care about.  Ella was a dumb chick who needs to find her fiancee’s diary in order to confirm her feelings about ending the relationship. She doesn’t heed her friend’s warning that she doesn’t need proof when she already has feeling her fiancee is cheating.  There’s a hypocritical hippie chick, a divorced couple who are hanging onto junk in order to hang out with one another and fight, a shady cop, and the weird storage dude.The only character you maybe feel bad for gets knocked off fairly quickly.  The set design was cheap, and the kills were lame. The concept of the Hoarder’s collection was just pointless and dumb. Surprisingly the acting wasn’t that terrible considering the atrocious script.

The creators of the  “Making of” featurette in the special features section of the disc tried to make the film seem lighthearted and fun, and unfortunately that was more entertaining than the actual film.

I can kind of see what the message the director was trying to convey in this forgetful film. It’s basically a big middle finger to consumerism the way we all hold onto junk we don’t need and feel the need to acquire more; but maybe I’m just digging a little too deep. I’d advise you pass on this one. 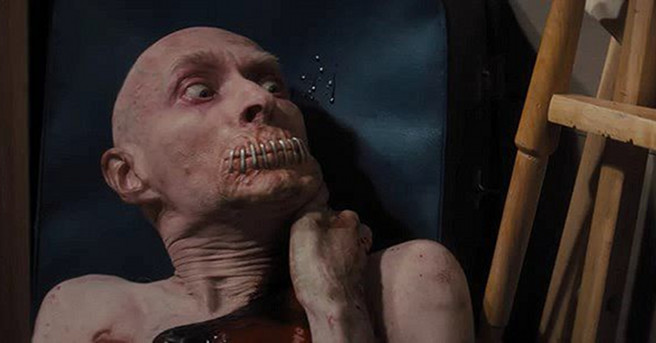