Jacques Audiard may not have gone a giant step further with “Dheepan” than he did with the searing “Un prophèt,” which finds a teen French-Arab man trying to find his way in a jail beset with gang violence between Corsicans and Muslims, but he comes close enough.  “Dheepan,” which is named for the principal character Dheepan Sivadhasan (Antonythasan Jesuthasan), may deal with the aftermath of a civil war in a country whose position on the world map is unknown by many Americans. Still we today are privy to a blizzard of news items about a similar drama, that of Syrian refugees in Europe.

Audiard wants us to see that the fighting in Sri Lanka’s civil war is not unknown in Western Europe, and that one trio of refugees seeking asylum in France wind up in a battleground that is different in many ways but is nonetheless a reminder that violence is a problem in the French suburbs just as it was in an island nation south of India.

As the titled character, Jesuthasan performs in the role of a man who had been a  child Tamil Tiger soldier in the last days of the Sri Lanka civil war and is lucky to get out alive when the Tigers lose to the government forces.  From a refugee camp, smuggled himself out of the country and takes a boat to France, but in order to have a chance for asylum, he is advised to create a family.  With the passport of a dead man, he teams us with Yalini (Kalieaswri Srinivasan) and an orphan girl of nine years, Illayaal (Claudine Vinasithamby), who will pose as wife and daughter.  Gaining asylum through the usual lies and half-truths, i.e. “I was tortured and my relatives were killed,” he is assigned to a tough northeastern suburb, Le Pré-Saint-Gervais, bagging the job as a caretaker for a complex that houses rival drug gangs while his “wife” operates as a health aide to an infirm, elderly man who apparently had been an active member of a gang.   The housing block’s French name translates as “the meadow,” this is hardly the accurate way to describe an area that houses thugs with machine guns.

Though at first Dheepan and Yalini have no feelings for each other, and for her part Yalini cares nothing about the orphan with whom they travel, their living together under one roof appears to indicate that proximity breeds affection.  Their bond is hardly sweetness and light, however, with Yalini determined to move to London to be with her cousin and their “daughter” facing problems finding friends in school when nobody wants to play with her and facing cruel treatment from her “mother” as well

It’s quite possible that Yalini’s bonds of affection for Dheepan are evoked when she has a few conversations with Brahim (Vincent Rottiers), who becomes fond of Yalini’s cooking.  The film’s principal humor arises when Brahim wonders why Sinhalese like Yalini move their heads around to affirm “yes” (or maybe “no”), though his curiosity of South Asian customs ends there, since finding out where Sri Lanka is located leads to his response, “whatever.”

The film takes a sudden turn during the concluding half hour, when Dheepan, disgusted with the gun violence paints a white line in the middle of the grounds declaring his side of the line a no-fire zone, but his actions mean nothing to the thugs.  Thus “Dheepan” becomes a vigilante film, which may attract the cheers of some in the audience but others of a more sophisticated bent might groan that the movie has degenerated into a Charles Bronson lookalike.

Largely because of Jesuthasan’s vivid performance, the film won the Palme d’Or prize, the top award in Cannes, beating out Laszlo Nemes’s Hungarian Holocaust drama “Son of Saul” which took the Grand Prix.  To my knowledge this is the only time that a movie principally in the Tamil language took the gold with ensemble performances principally by non-professional actors, knocking out a searing story that is at once a love story, a social drama, a film noir and a genre film.  “Dheepan” was filmed in India’s Tamil Nadu and in France.

Audience members curious to learn more about Jesuthasan will find that he had jointed the Tamil Tigers as a teen, got disillusioned, left the radicals, moved to Thailand, flew to Czechoslovakia on a fake Malaysian passport, is deported to Bangkok, and headed for French with a fake French passport.  Not unlike his character, he sought asylum, lived in the banlieue of Paris, and cleaned a hotel at Disneyland Paris.  He has only a 10th grade education, cannot read English or French, but is a whiz at the Tamil language.  His principal novel is “Gorilla” about a Tamil Tiger child soldier, which means that he not only writes what he knows but acts on that basis.

He called France one of the best countries for refugees, though things may change if Marie Le Pen’s National Front wins the next nationwide election. 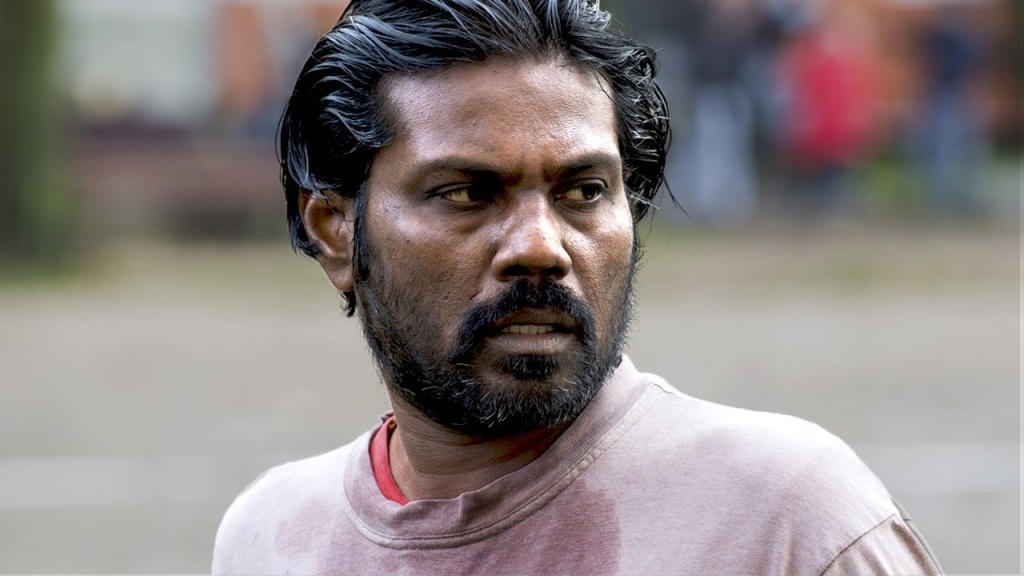