The most enthusiastic idealists often become entrancingly drawn to the most intriguing, yet equally dangerous, prospectives that they can uncover. Even if continuing to pursue the seemingly alluring details of the threatening situation can impede their liberties and freedom, the thrill of the chase becomes the most stimulating element of their lives. That’s certainly the case with Patrick Wilson’s intriguing protagonist in the new psychological thriller, ‘A Kind of Murder,’ which is based on Patricia Highsmith’s 1954 novel, ‘The Blunderer,’ and whose screenplay was adapted by Susan Boyd

The intense journey into the lead character’s inquisitive mind was captivatingly showcased in the drama, which was helmed by BAFTA Award-nominated director, Andy Goddard. Wilson generously took the time the day after ‘A Kind of Murder’ had its World Premiere during the Spotlight Section of the 2016 Tribeca Film Festival to discuss his character’s perilous expedition during an exclusive interview in New York City.

‘A Kind of Murder’ follows Walter Stackhouse (Wilson), a successful and seemingly mild-mattered New York-based architect who’s married to prosperous real estate saleswoman, Clara (Jessica Biel). He has become unhappy in their relationship, as she’s becoming increasingly difficult to live with. To offset his seemingly complaisant personality, which is secretly becoming hostile as he tries to maintain his marriage, Walter fully embraces his favorite hobby of writing crime stories.

As Walter searches the newspaper for reports of crimes that inspire his plots, one article influences him too much. He becomes entranced by the story of rare-book dealer Mitchell Kimmel (Eddie Marsan), whose wife was brutally murdered at a rest stop on a long bus trip. The architect starts to fantasize how Mitchell might have committed the crime, instead of a brutal stranger.

When Clara is then found dead at the bottom of a ravine at the same bus stop, after also embarking on a long bus trip, the determined Detective Lawrence Corby (Vincent Kartheiser) begins to suspect that Walter killed his wife. The law enforcement official begins to frequently visit both Walter and Mitchell, but he can’t uncover any concrete connection between the two men, especially since everyone else thinks the bookstore owner is innocent. But the architect has has plenty of reason for worry, as a new woman, Ellie (Haley Bennett), has suddenly appeared in his life. Walter’s world ultimately begins falling apart, as Mitchell attempts to keep the detective’s investigation at bay. As a result, all three men are left wondering who really killed the women, and how they can protect themselves from any further harm.

Wilson began the conversation by revealing that he became involved in playing the successful but unhappily married Walter in ‘A Kind of Murder’ in a “fairly simple way. I was sent the script. While I didn’t know Andy Goddard, the director, or the book, I loved the script.” Once he did start to familiarize himself with the novel and its story, “I felt like it was this Highsmith gem that hadn’t yet been translated into an American version. I also loved that it was this slow burn and a psychological thriller that features a problematic hero.” The Emmy Award-nominated actor added with a laugh that he’s “always interested in playing a guy with issues.”

Following up on the fact that the drama focuses on the anti-hero’s psychological traumas, Wilson then explained the process of balancing Walter’s increasingly intense sentiments with the story’s external conflicts, and how they drive and influence each other. “There are a few elements in the story that helped with that,” the actor explained. The first component that aided Wilson in his performance, particularly in understanding the protagonist’s psyche, was the costumes that he wore. “I think the era and wardrobe style and look helped the physicality of the role. When you wear those types of clothes,” it helps the actor connect to his characters. “I remember doing a play that was set in the ’60s. There was something about the clothes for both characters that keeps you together.

“Even though you’re dealing with the 1960s, he still has a very ’50s mentality,” Wilson also mentioned when then delving into how Walter’s emotions also influence his actions. The Tony Award-nominated performer added that his protagonist is influenced by the fact that he’s “feeling a little stifled. He’s fascinated by this young girl who represents the 1960s, including the freedom and liberation” of the era. “So it’s fun to play someone who’s falling apart, but looks so together. That gives you a good balance.”

In addition to connecting to the protagonist through his wardrobe and emotions, “We also had to understand his intentions and where he was coming from, because Walter doesn’t know where he’s going,” Wilson revealed. “So there wasn’t a lot of over-thinking of what was going to happen when I walked into a room during any scene, because Walter didn’t know.” As a result of the protagonist’s impromptu behavior, the Golden Globe-nominated performer also explained that “there’s a series of small mistakes that he makes. So I just had to prepare to go in there and throw it all away, and be open to seeing where the scene took me.”

Wilson was able to relate to Walter in part because he read ‘The Blunderer,’ which he described as a great book. By referencing Highsmith’s novel, he was able to better understand his character’s decisions and mentality. “Even though there are differences that Susan made along to the story the way, also knowing where Highsmith was coming from helped fill in the gaps of the type of person Walter is. So reading the book was extremely helpful,” the actor explained.

Goddard’s work as a director also aided Wilson as he tried to build the protagonist. The actor described the filmmaker as “being awesome.” The actor also noted his appreciation for the helmer’s distinct approach to capturing all of the scenes they needed for the drama on its independent budget.

“It’s tough to be on these types of shoots when you have such a short amount of time to film. The benefit to that is that you can make a movie now relatively inexpensively, because of the quality of independent film. The problem is that you don’t have a lot of money, so you only get a certain amount of days to shoot,” Wilson revealed. “For this film, we only had about 23 shooting days, but we could has used about 26 to 30, which is a big difference.”

The actor also divulged that “Andy would have scenes that he wanted to shoot every day. But he was also so gracious if we couldn’t make our day, and had to cut a scene. I remember going up to him and saying, ‘You’re so good about this, and not keeping us for 17 or 18 hours a day.’ That often happens in these independent movies, and you have to scramble to make your day. If you don’t get want you need, you fall behind, and then beg for more money, so that you can shoot for an extra day.'”

Since Goddard is so accommodating to the cast and crew, Wilson revealed that he asked the director to ask where that personality trait came from. “He said, ‘I have a list of things that I need for the film, and a list of the things that I want.’ He could go through the scenes and say, ‘I want that scene, and it’s in the script, so we should shoot it. But I don’t need that scene.’ So he knows how to put on the brakes when he needed to,” the actor divulged.

Wilson added that ‘A Kind of Murder’s director “also had the good grace of wanting to spend more time on a scene that’s vital to the plot than a scene that just offers a character moment that we don’t really need to tell the story. It had to be tough to let go of those scenes, but it taught me a lot as an actor, producer and maybe director down the line. You need to know what you really need and what you just want, because a lot of times, they’re not the same thing.”

Further discussing the overall approach he takes when he works on any independent film, Wilson noted that “as an actor on these types of projects, I have a much stronger understanding of how a scene’s being shot, and what we’re going to need. We’re not going to get a lot of time, so I have to come in prepared.”

The performer also revealed that while he now appreciates having all of the small details now about the filmmaking process when he’s on set, “ten years ago, I just thought, I’m just going to act, and hopefully you guys film it. I’m not judgmental, but I now ask, ‘Where is the shot?’ I want to know, because I want to be on the same page.’ So that raises the game when you’re making an independent film, since you don’t have a lot of time, and can’t cover a scene seven different ways.”

Finishing the conversation by delving into the subject of showcasing ‘A Kind of Murder’ on the film festival circuit, particularly having its World Premiere at the Tribeca Film Festival, Wilson explained that the experience “has been great. It’s nice to bring any New York-set film here to the city, even though we didn’t shoot this one here. I’ve been in and around New York for over 20 years now, and have had other films play at this festival. But this movie is a nice fit for Tribeca, because (its production company,) Killer Films is here in the city.”

The actor lastly added that “I’m tremendously proud of the movie and what everyone did for it, from the cinematography to the production design by Pete (Zumba). It’s a beautifully shot film, so it’s always nice to promote something that you like.” 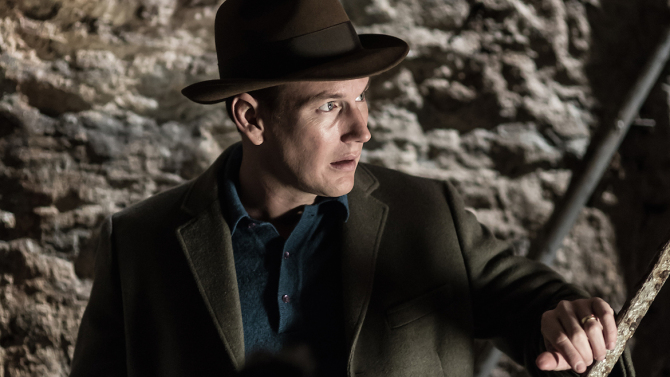