Music fans are often enthralled with the idea of the high-powered lifestyle that their favorite musicians seemingly live, and fail to realize that their public persona is usually an act that’s constructed to help promote their latest albums. But musicians usually become more willing to honesty share the details of their personal struggles once they overcome the biggest conflicts in their lives. That’s certainly the case in co-writer-director-producer Christopher Duddy’s new autobiographical music documentary, ‘It’s So Easy and Other Lies.’ The film powerfully chronicles the battles that Guns N’ Roses founding member and bass player, Duff McKagan, has contended with throughout his life.

Featuring exclusive archival footage, ‘It’s So Easy and Other Lies’ chronicles Rock and Roll Hall of Fame-inductee McKagan’s meteoric rise to fame and fortune, his near-fatal struggles with alcohol and drug addiction and his remarkable life transformation. The authorized documentary features interviews with many of the people who hold a special place in the bassist’s life, including numerous rock stars who rose to fame alongside him, and the people who inspired him to overcome his addictions. In a voice that is as honest as it is indelibly his own, Duff takes audiences on a harrowing journey through the dark heart of rock ‘n’ roll.

XLrator Media will be releasing the music documentary, which is based on McKagan’s New York Times best-selling memoir, in 50 cities nationwide beginning today, prior to its Los Angeles theatrical release on June 3. Fans can visit the film’s official website for theater information and to purchase tickets.

Duddy generously took the time recently to talk about writing, directing and producing ‘It’s So Easy and Other Lies’ during an exclusive phone interview. Among other things, the filmmaker discussed how he became interested in making the film after McKagan, who was his neighbor, released his memoir, as the director found the musician’s story to be inspirational and relatable. Duddy also mentioned that about 80 percent of the score and music that’s included in the movie is live covers of Guns N’ Roses and Velvet Revolver that the bassist featured at his book reading show of his memoir at the House of Blues in Cleveland.

ShockYa (SY): You directed the new documentary, ‘It’s So Easy and Other Lies,’ which chronicles the lifetime story of Guns N’ Roses bass player, Duff McKagan. Why were you interested in helming a movie about Duff’s life and career, and how did you become involved in the project?

Christopher Duddy (CD): Duff and I were friends before we began making the movie. We were neighbors, and I actually met him while we were walking our kids to school. When he wrote his book, he asked me to read it. Reading the book was what really inspired me to want to make a movie about him. His story is really inspirational, and I thought it was something that audiences could really relate to if they saw it. But he said no to the idea of adapting the book into a film at first.

Duff then asked me to go with him on the press junket for the book’s paperback release. So I started going with him, and would shoot things for him. He was appearing on morning shows, and would also do book signings.

He then asked me to go to Cleveland with him when Guns N’ Roses was inducted into the (Rock and Roll) Hall of Fame (in 2012). He said, “Come the night before, because I’m going to do a book reading show at the House of Blues in Cleveland.” I didn’t know what a book reading show was, but I brought my camera to the event. I was blown away by the show, because I have never seen anything like that before. He was sitting on a stool and reading pages out of his book, and his band, Loaded, was scoring it; they were playing music to his reading, which I thought was really unique.

So when I got back to L.A., I pitched him the idea of having the book reading show be the catalyst for the movie, and drive the storytelling. It then became really clear to me how we could make this movie unique. Duff always stressed that he wanted this to be a different type of documentary, and not just be the standard talking head documentary. So we both agreed that this book reading show would be a good, unique device to drive the storytelling.

SY: The documentary features interviews with people who know and have worked with Duff, including Slash, Benny Urquidez and Nikki Sixx. What was the process of securing the interviews that you included in the movie?

CD: I had a whole list of possibilities that I would try to get interviews with, and then narrowed it down. There are a few interviews that we shot that aren’t in the movie, as they didn’t go with the flow of the storytelling. There were also people who weren’t available in the time frame that we had. But I was happy to get all the people we did get, like Nikki Sixx and Slash, as they were all pertinent to certain parts of Duff’s story.

Of course, there were other people I would have liked to have gotten and included in the movie. But getting them would have just been for the name value, and wouldn’t have lent anything to the actual narrative of the story. So I think that we rounded it out pretty well with who we did get.

SY: With ‘It’s So Easy and Other Lies’ focusing on Duff’s music and life as part of Guns N’ Roses, what was the process of deciding which songs to feature in the film, and creating the overall score?

CD: The interesting thing and beauty of the movie is that about 80 percent of the score and music that’s included in the movie is live covers of Guns N’ Roses and Velvet Revolver in that live show. Duff was already doing a show, so he had a set list that he felt went along with the storytelling. So that list was incorporated into the film. To stay true to the narrative, the only other live recordings that we used were from one of his bands, Walking Papers. That music really helped tell the narrative of the stories that we used. All of the the live music is really special.

Most of the musicians in his live band were already in his band, Loaded, and he also brought in a string quartet. Since the band members were already playing with him, they knew his songs. But they had to make the musical arrangements for the string quartet for all of those songs. Martin Feveyear, who’s one of Duff’s producers, and has also produced all of Loaded’s albums, also produced and engineered the show. This film is the first music documentary that I have directed, so I was in good hands with everyone, because they’re top-shelf musicians and producers.

SY: What was the editing process like, once you finished filming the interviews, and determined what clips and photos you wanted to include in the movie?

CD: Documentaries are tricky in that way, but they do really find themselves during the editing process. Duff and I had a clear path of what we wanted to include in the final version of the film. I wrote a script for this film, but for most documentaries, you only create an outline. I created a really detailed outline that was almost like a full script.

But with the book reading show, Duff had already picked the chapters that he wanted to include in the show. So I built the documentary around those chapters, which made the filmmaking process easier for me. I have produced a couple of documentaries before, and have also watched a lot of documentaries.

They’re different from feature films, however, because with features, you know exactly what you’re shooting. The actors know what they’re doing, and everything’s pre-planned. But documentaries are much more spontaneous and organic projects. For example, I didn’t get the Slash interview until the last minute. I kept telling Duff, “I really want to get Slash.” But he said, “I don’t know if he works for this part of the story.” But then all of a sudden he said, “Okay, Slash is going to do it,” and you just jump at those kind of opportunities.

Then you have to put all of those spontaneous moments and opportunities together during the editing process. I had a really good editor, Keith Megna, who was super creative and patient, because it was a long process. We edited the film for about a year, and it was hard to choose what to include. There’s a lot of good stuff that didn’t make it into the movie. We had over 1,000 hours of footage, and we had to edit it down to 82 minutes. We wanted everything in the final cut of the film, but we knew the reality is that we couldn’t include everything. At the end of the day, I’m really proud and happy with the final outcome of the movie.

Watch the official trailer for ‘It’s So Easy and Other Lies’ below. 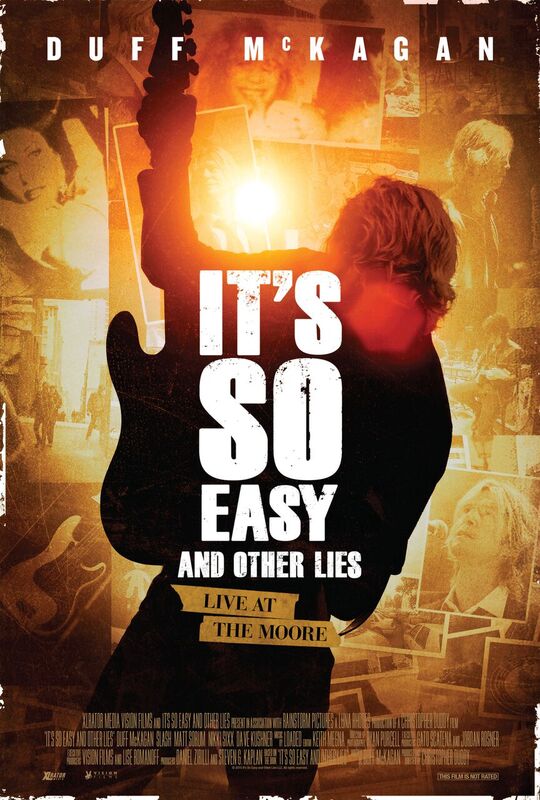