After you see this film, if you do not go right to Amazon and spend fourteen bucks for Look Homeward Angel (Thomas Wolfe’s autobiographical novel about a young man’s wanderlust and passion to leave his small town and tumultuous family life for a more intellectual experience), you either dozed off during part of “Genius” or have given over your reading hours to reading texts from your friends.  You may feel more comfortable knocking out 140 characters on Twitter but then, there are some folks out there who are perfectly able and desirous of burying themselves in hundreds or pages from a great author.  We learn that the first draft of Angel took up one thousand pages before a celebrity editor redlined a good deal of the verbiage.  Remember also that the novel was written in 1929 on one of those ancient machines that they called typewriters, though Wolfe himself was fond as well of using a pencil.

Grant that Michael Grandage’s “Genius” is not a masterwork like Angel or Wolfe’s other famous tome Of Time and the River (the author’s move from North Carolina to Harvard, New York and Europe), and You Can’t Go Home Again (a portrait of America and Europe from the Great Depression to the eve of World War 2). Still you’ve got to admire director Grandage’s  talent and John Logan’s adaptation of A. Scott Berg’s Max Perkins: Editor of Genius.  They make a basically literary story into a coherent, visual, cinematic thread.  Grandage, mostly an actor in TV series and here making his debut as director, handles what is largely a two-hander with strong accompaniment from families, including an array of fedora-wearing extras in the New York of 1929.  Think “Streets of New York” without the criminals (unless you have no sympathy for the crowds downing bourbons during Prohibition).

First-time writers have difficulty getting editors to green-light their novels.  Arianna Huffington suffered through thirty-seven rejections before she became famous, and John Grisham was shut out quite a few times until editors with more prescience than most of their profession took risks in getting them started.  So it was with Max Perkins (Colin Firth), sitting in his unassuming room at Scribner’s in New York.  While his job may have been at stake had he bankrolled an unknown, he was the first in his vocation to see greatness in the Look Homeward Angel.  Nor was he overly surprised when the author, Jude Law (Thomas Wolfe), showed up in his office.  Many writers are doubtless introverts, but Wolfe was anything but that.  He would burst into every scene, whether at Scribner’s or at Perkins’ suburban home, flaying his arms about, speaking loudly and enthusiastically.  We might wonder whether he ever got some sleep, between the long hours writing and an extroversion so intense that people both in his presence and nowadays in the movie audience either could not take the stentorian voice or reveled in Wolfe’s apparent lust for life.

Perkins was so enthusiastic about Wolfe that he frequently invited him to his home, where his family, a brood of daughters headed by Perkins’ wife Louise Saunders (Laura Linney), and later Wolfe’s melodramatic patron Aline Bernstein (Nicole Kidman) frequently note their frustration with the all-encompassing, buddy-buddy relationship of the two men.  As Saunders, Linney’s personality is too modulated to show the depths of her despair, but Bernstein would show such rage that in one scene she pulls out a gun on Perkins, calculating whether she should kill this editor, or Wolfe, or herself.

For his part, Firth never moved his fedora from his head except in a dramatic conclusion whether in his office, on a train or in his own house.  He could be a product placement for the Stetson diamond Jim gun club hat.  Perkins, more of an introvert than Wolfe (who wouldn’t be?) is ill at ease in a Harlem speakeasy, grousing that he’s not much for music except for “Flow Gently Sweet Avon,” while the larger-than-life author digs the sounds of clarinet and trumpet, getting up to kiss a trio of “working women.”

Virtually buried in this story are F. Scott Fitzgerald (Guy Pearce), who comes across as depressed as does his schizophrenic wife Zelda (Vanessa Kirby), and Ernest Hemingway (Dominic West) who appears to be the only normal, life-affirming character around.  But they seem to show up as though in another movie.  This one is all about Perkins and Wolfe.  The desaturated color may put some people off, but the grays do illuminate the period nature of this piece.

Critics are bound to argue that Jude Law will evoke from the audience a plea to shut up, but then, perhaps Law is simply reflecting Wolfe’s actual character.  Like Hemingway and Fitzgerald, Wolfe died before his time—he was just 37 when done in by a “myriad of brain tumors” and was buried in his native Asheville, North Carolina—the place he could not wait to leave behind.  His novels are no longer on many college syllabi of great American writers, but perhaps this movie will drum up some trade for one of the best writers of his generation 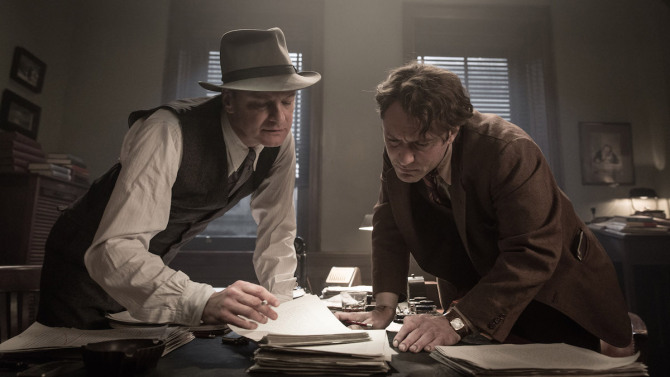