In 1942 the Nazi government in Germany announced that the country was “free of Jews.”  Presumably all had either left when the leaving was good or deported to the camps where most were murdered.  Would a single German citizen, part of the mobs raising their arms in the obscene salute and pictured by Janina Quint in her documentary “Germans & Jews,” have guessed that decades later there would be 200,000 Jews living in there?  And that all of these folks went there of their own free will, probably considering that in all of Western Europe Germany enacted the most liberal policies toward ex-patriates?

Unless Turkey, whose government consistently argued that there was no massacre of Armenians in 1915 and prosecutes those who make these admissions, Germany has altogether bent over backwards to say mea culpa, to take responsibility, to grant reparations to Israel, to welcome Jewish immigrants and tourists with open arms.  When I visited Berlin, I was astonished to the amount of material about the Holocaust, both in print and in stone, in museums, on the street, and with brass plates on the sidewalks.  This is not to say that anti-Semitism no longer exists, but it’s certainly not fashionable as it is especially in the Middle East, where the old warhorses like the forged Protocols of the Elders of Zion blaming the Jews for a plot to control the world, are trotted out.

Janina Quint’s documentary emphasizes the positive nature of the Germany people, a freshman directorial effort by a woman who is not simply cautiously optimistic about the future of Jews in Germany but who wholly embraces the new zeitgeist in Berlin and environs.  The film is a collaboration between producer Tal Recanati and the director who present an assortment of talking intellectual heads, each giving a point of view about the kumbaya between German Christians and the Jews who now comprise just 0.2 percent of the population. (It’s no wonder that most Germans today have probably never met a Jew.  By contrast, the Jewish population in the US. is 2%.)

The Jewish spokespersons recall envious childhoods, shattered by the goosestep marching of Nazi soldiers, fearful about signs beginning in 1933 when Hitler rose to power forbidding Jews to shop for groceries except between 4 and 5 in the afternoon, then progressing by banning Jews from using benches reserved for “Aryans,” going on to posting signs outside Jewish shops and later smashing the stores during the infamous Kristallnacht on November 9-10, 1938.

Ms. Quint is focused intently on her subject to the extent that she does not digress by expressing Germany’s centuries’-old tradition of anti-Semitism; that is, no mention of Richard Wagner or of Martin Luther, so some viewers could get the idea that hatred to Jews did not exist before 1933.  She does display for us the burning of hundreds of allegedly anti-German books as early as the year that Hitler ascended to the chancellorship, making us wonder how a Western nation that gave us Beethoven, Bach, Brahms and Schiller could resort to such absurdity.  Nor did her many talking heads allude to this concept.

One scene that could make some viewers do a double-take, even when absorbing the idea that so many Jews have chosen to live in Berlin, is that of a Chabad-Lubavitch rabbi, speaking fluent English, who embraces the warmth this land evokes.  Some Russian Jews are included in the chats, people who had chosen to live in Germany rather than in Israel or the U.S., and quite a few Israelis have made a reverse-Aliyah as well.

German youth today learn so much about the Holocaust that this is perhaps the only chapter in their country’s long history that they remember decades later.  Nor do they feel any guilt, as well the young people need not, though on field trips they are taken to the Jewish museum in Berlin (I noted during my trip that 12-year-olds entered the museum in hordes during their summer vacation! and nobody kidded around or texted during that time.)

I would have preferred more shots of the Berlin scene in general, less time devoted to the intellectuals with their predictable commentaries.  The picture is therefore not so visually compelling as it is didactic, but at seventy-six minutes it does not outlast its welcome.  The film uses English and German, the latter illuminated by bright yellow subtitles. 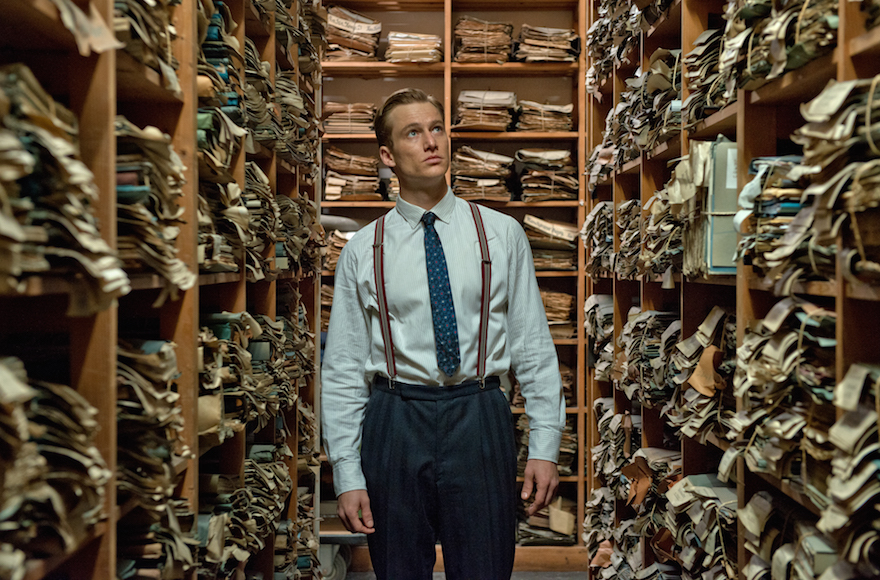