There’s this Yiddish proverb Mann Traoch, Gott Lauch, meaning, loosely, “If you want God to laugh, tell him your plans.”  Todd Solondz, best known for “Welcome to the Dollhouse” (an unpopular seventh-grade girl finds her life miserable, taunted by the world), this time looks into several individuals and families whose plans may call for a happy future.  But life intervenes and dismay and depression follow.  Solondz’s picture of America from the Big City of New York to some remote suburbs, wealthy or downscale, is not particularly hopeful—never mind that our country is among the world’s richest and freest.

The film starts out optimistically when nine-year-old Remi (Keaton Nigel Cooke), a cancer survivor, is presented by his dad Danny (Tracy Letts) with a placid Dachshund which the boy names Wiener-Dog.  This provokes anger from the boy’s mom, Dina (Julie Delpy), who fears that their extravagant house with its two-car garage (one being a sporty, red Mercedes) will become filthy.  On the way to the vet with the dog, Dina provides this dark, dark comedy with its most trenchant monologue: Dina, who has a better rapport with her son than the boy’s gruff dad, happily tells him why Wiener-Dog is being spayed by recalling the presence of a mean, stray mutt whom she calls a rapist.

“Wiener-Dog” becomes, in effect, a series of separate narratives bound together by the small, sausage-like dog, the four-legged creature introducing us to others whose lives come off as meaningless, vapid, and unlived as what Solondz implies is the fate of most Americans.  When Wiener-Dog is rescued from a vet planning to euthanize her, his assistant, Dawn Wiener (Greta Gerwig) in her typical eccentric role runs from the office with Wiener-Dog (whom she has named Doody) accepting a ride to Ohio from a former classmate, Brandon (Kieran Culkin), who in turn visits his Down-Syndrome brother Tommy (Connor Long) and his wife April (Bridget Brown).  Though the dog is left with them, she inexplicably winds up in New York toted by Dave Schmerz, a once-successful film writer, now a professor who risks dismissal from the college because of his advanced age and alleged negativity.

The movie becomes steadily more hopeless when an aging Nana (Ellen Burstyn), hit for money by her granddaughter, Zoe (Zosia Mamet) in a rare visit, takes possession of the dog while later receiving a vision as though by a stroke with a number of small, red-haired girls representing her unlived lives—unlived despite her materially comfortable circumstance which allows her to write a blank check for Zoe.

Back to that Yiddish proverb: nobody’s life turns out as planned.  Even the Mexican trio picked up by Brandon on the way to his brother’s house do not like America because they find the country the ultimate scene of loneliness.  The film is despairing, and yet can safely be called a dark comedy because of the whimsy sprinkled throughout, backed up by Edward Lachman’s photography and a flurry of songs headed by “South Park” composer Marc Shaiman’s “The Ballad of Wiener-Dog.  Like the people who adopt her, in no way does this dog get the life he deserves. 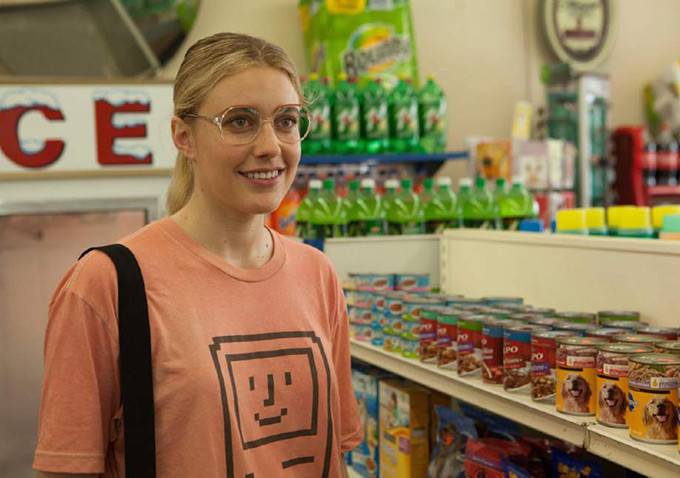