In the early days of his career a young Bruce Campbell joined forces with the fresh filmmaker Sam Raimi in a low budget horror movie called ‘The Evil Dead’. Ever since then Bruce Campbell has taken on multiple roles in plenty of movies and television shows, but his fans will always always associate the dashing actor to the bloody franchise that helped define that decade of horror.

Who would have guessed that years after he first took on the role of Ashley “Ash” Williams that Bruce Campbell would inevitably take on the role once more? Similar to Ash’s association with the Necronomicon in the ‘Evil Dead’ universe, this is a character who’s battle against the forces of evil will never lay to rest. So fans rejoiced when the tale of the S-Mart employee turned Deadite killer continued on in the popular Starz series ‘Ash vs Evil Dead’.

The new show brought audiences right back into the blood-splattered world where an older and not-too-wiser Ash faced a new set of demons with the help of some friends. Even though they barely made it out of the first season alive, there’s still evil spreading itself out into the world – largely due to Ash’s deal with Ruby. Everything may appear cozy for Ash and his friends in Jacksonville, Florida, but their troubles are far from over.

ShockYa.com and a few other journalists got the fantastic opportunity to speak with Bruce Campbell about being able to act alongside Lee Majors and an upcoming fight scene in season 2 that may possibly sicken some viewers at home. 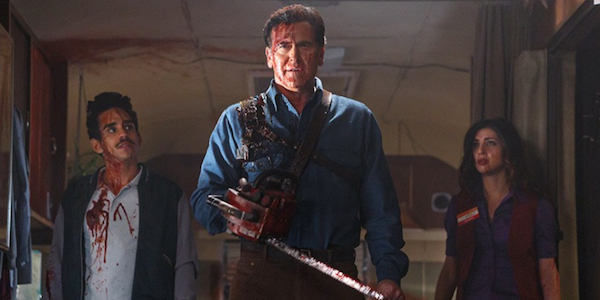 So is there more pressure on you going into this season?

Bruce Campbell: Yes, because of expectations. If we get through season 2 alive then we’re good. I had a bold prediction; this is the season that it sticks, because you’ve put a show out on the air and it takes a long time to get around the world. There’s selling this around the whole world, and it takes a long time to get there. Season 2 comes out and people go I think I’ve heard of that show, they check it out, and the more you see it, the more it becomes real in your head. Like if Starz were to give us a season 3 now, people would go oh, this is a real show. Oh well I’ll start watching it then, that it’s worth investing your time in. Cause sometimes you just go well I don’t know how long the show is going to last, so why should I watch it? Plus, you know people have a list of what they’re binging, and you have to allow for them to get to your show. We might be in a queue of three, four, five other shows that they’ll get to us, but not right now. So all these networks have to learn how to check the ratings. No one is sitting there live on a Tuesday at 8 ‘o clock anymore, nobody. And half of you bozos don’t even have cable. You’re all untethered, so Starz put out the app recently, $8.99 whatever the hell it is that they get out of you a month they get it all. So they’re getting with the program. The trick is that they’ve gotta stay up with this speed of you people to stay current with how they — look, I want what I want on my device and I want it now, and I want it on this device and I want it on that device. I want to be able to put it on my TV, so they’re not there yet but they’re getting really close.

So with season 2, you’ve got Lee Majors as your father.

There couldn’t have been better casting on it. So what was it like getting him cast and working with him?

Bruce Campbell: Well you never know. It’s always the danger of what’s the guy like as a real human, and Lee is great because he’s been on three television shows that have each went over 100 episodes. ‘The Big Valley’, which was a hundred years ago, that was his western show that put him on the map, and then obviously his classic ‘The Six Million Dollar Man’ and ‘The Fall Guy’. What you get is you get a guy who’s spent a lot of time on a film set. He doesn’t crap around, he knows exactly what every camera does. He knows technically he knows what’s happening, so none of it is a mystery to him. He never leaves the set. He wants to rehearse his lines, he memorizes his lines. You know, modern actors honestly can get a little lazy. They run back to their trailer, they put their earbuds in and they do what they do. Lee just goes and sits in a chair in the corner of the set. He never leaves. It’s like Lee, can I get you anything? Nah, I’m good. Cause that’s just how he grew up. He grew up on a set. First two shows he worked on he lived on the lot. He had an apartment on the back lot. You work so many horrible hours, you just stagger up to your apartment and collapse, wake up the next morning, come down and work all day. I mean those were different times, so this guy has put in his time and I have a lot of respect for that. He’s still sharp as a tack and in the show he’s really funny. And we have a couple of great conversations that have fun little kind of bionic hints you could say.

Could you tell us at all about the direct aftermath of the last season’s decision?

Bruce Campbell: Ash is living the dream in Jacksonville, Florida. What could possibly go wrong? That’s how we find him, living the good life.

That last scene in the last episode was so Ash. He went through all this crap, the same crap every time and he still has a smile on his face.

Bruce Campbell: Hey man, he’s just a guy who loves life. And he got gas money! See, he’s no idiot. But look it, Ash is a flawed human and that’s the beauty of it. He’s a very flawed hero. I don’t like heroes that are perfect, that’s snoresville man. I’ve turned down hero parts because the bad guy was so much better. I’ve told the producers I’ll play the bad guy. I don’t want to play the good guy, cause the good guy’s got shitty lines. The good guy’s got lines like this; come on! Let’s go! Get down, now! That doesn’t cut it for me. The bad guy had all these flowery speeches. I was like let me do that, and they did. And I got to watch Robert Culp’s son Joe Culp struggle with his shitty dialogue for the whole movie. I was like “You poor fucker”.

Even though this is ‘Ash vs Evil Dead’ it’s blood and guts and comedy, you’ve got an older guy who’s a super hero guy and it’s against type.

Bruce Campbell: Oh Ash drinks and he smokes angel dust. I mean he’s drinking champ’s beer while he’s driving. He’s got a pile of crushed cans in the back there man.

You’ve got that, you’ve got a badass chick that’s smarter than most of the guys in the show.

It’s so awesome to see it, I don’t wanna call it like role models that —

Bruce Campbell: Well it’s role models for real people. They’re not role models like for some kid like little Billy who’s looking to actually look up to someone. I mean I hope that they see the humor in it and no kid will ever really try to be like Ash. God forbid. They’re going to be walking around in their junior high school. Where can I get some angel dust man? Ash smokes it, come on let’s go.

Ash is the Vietnam veteran now. He’s the guy at the end of the bar going “That’s not going to work”. “How do you know?” “I know”. It’s a little bit like that. Well, and here’s the truth of it; I remember John Wayne only as an old guy. What he would do is when he knew he was an old guy, he started putting like Glen Campbell in it and he always had a singer. He’d put a young singer in his movies cause that’s for the young people. They’ll like Glen Campbell, he’s a good singer. So this is the case. Ash is surrounding himself by young, attractive people, and I’ve got a very good stuntman — Raicho Vasilev. He is Bulgarian and I worked with him on ‘The Man with the Screaming Brain’ in Bulgaria and that’s how I met him. He’s since then on his own went to New Zealand and worked on Spartacus and got in that, so I reunited with him on this and he’s a great stunt double. Raicho Vasilev from Bulgaria. He’s the busiest stunt man in showbizness.

He strolls into his hometown in the second season; what is it like with ash interacting with his father and his high school friend there?

Bruce Campbell: It was great to see Chet (Ted Raimi) again because Chet and I were old buddies. Chet is a very questionable character of his own. He makes drinks laced with ketamine. Yeah, so this is not a healthy situation. This kind of like West Virginia, kind of like the meth capital. And his relationship with his father is terrible. He hasn’t seen his father in 30 years. His father thinks he’s a serial killer, a maniac, and the whole town has given him a nickname “Ashy Slashy”. So when he comes back to help the town they don’t really want it, so he’s got to fight the Evil Dead and his town.

In season 2 do you have some crazy creatures come your way?

Bruce Campbell: We have the same team that made them from season 1, and all of these guys they compete with themselves. We have what we call skin puppets. There’s a fight with a colon, an extended fight with a colon. That’s a water cooler scene, no question about it. I mean I could go on. There’s also a new main main main baddie who is — he’s a nasty fucker, but we’re gonna take him down if we can.

If you could thank Ash in real life for all the joy he could’ve given you in your entire career, what would you say to Ash?

Bruce Campbell: What would I say to Ash? Thanks for nothing bum. No I’m grateful that that character got me into the business, and I’ll probably play him until I’m out of the business.

‘Ash vs Evil Dead’ Season 2 premieres this Fall on Starz. 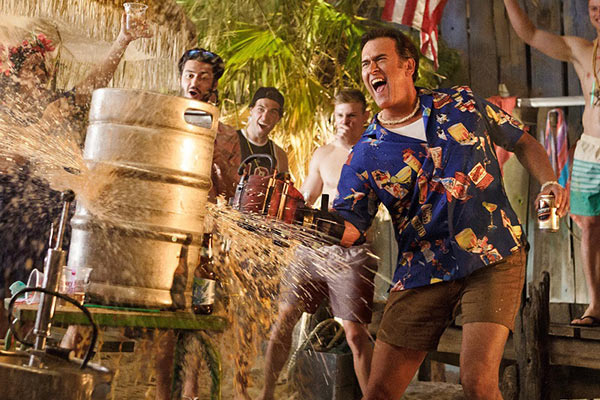